If you’ve got a fairly recent MacBook Air or MacBook Pro, you’ll know that typing in a dark room is a breeze thanks to its backlit keyboard. It now seems as though Apple is looking to extend this feature to the trackpad as well. In a new patent filing entitled “Illuminated Touchpad”, the Cupertino company describes a new touch-sensitive input technology that doesn’t just light up, but also provides an “improved feedback mechanism.”

Discovered by AppleInsider, the patent was first filed back in April, and was published today. It seems it was originally intended to cover the touch-sensitive click-wheels on early iPods, but has then been expanded for use in things like notebook trackpads, or accessories like the Magic Trackpad.

The patent not only describes a touchpad that lights up in a dark environment, but one that also aims to “give other feedback related to how the touch pad is being used.” For example, in one illustration, the illumination follows a user’s finger as it moves, and changes color or brightness  depending on the pressure applied.

The patent also notes that the technology could have a wide variety of uses that are helpful in different computing situations. In one example, the touchpad lights up in a certain area, inviting the user to touch that particular spot. 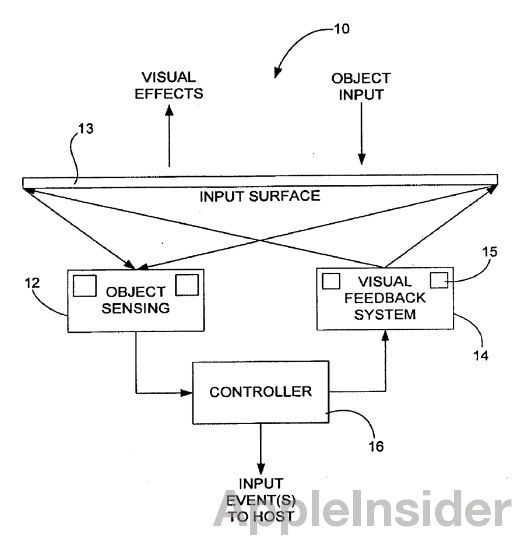 Apple notes that powering the touchpad would require cheap and efficient LEDs that could be arranged in simple patterns, or more complex configurations that would allow for more accurate feedback. The LEDs would be cool enough to be placed beneath the touchpad without melting the user’s fingertips.

The advantage to using LCD and OLED panels is that different controls could be presented on the display — kind of like having a mini iPod touch built into your MacBook. For example, you might see music controls when you open up Spofity, calculator buttons when using a finance app, or even a clock or timer.

Like all Apple patents, we can’t be sure this one will ever become a physical product, but it proves at least that Apple is working on this technology.