After getting its nano-SIM (4FF) proposal approved by the ETSI earlier this year, Apple’s new technology was always going to make its debut in the sixth-generation iPhone. And in case you needed proof of that, here are several pictures of the new iPhone’s nano-SIM tray up against the iPhone 4S’s micro-SIM tray. As you can see, it’s significantly smaller this time around, measuring less than a centimeter wide.

The nano-SIM is shaped just like the micro-SIM, and the SIM card that came before it. But it’s 40% smaller than the micro-SIM, and measures 2.3mm wide by 8.8mm high, and 0.67mm thick. Like its predecessor, the nano-SIM requires devices to utilize a SIM card tray, which is one of the reasons why rival smartphone manufacturers were against Apple’s proposal. 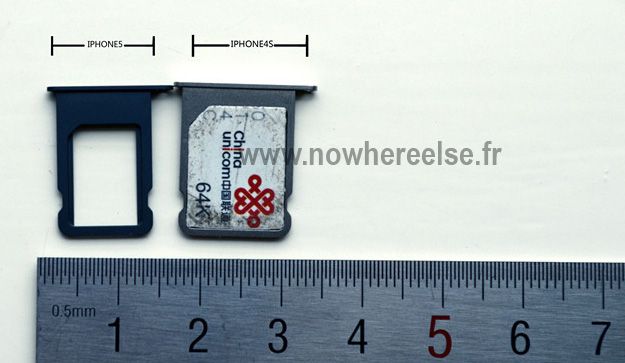 French site NowhereElse reports that carriers are already making large orders for the nano-SIM in anticipation of Apple’s new iPhone unveiling later this year. According to recent reports from a number of reliable sources, Apple’s event will be held on September 12.

What’s interesting about this nano-SIM tray isn’t just its size, but also its color. Existing iPhone SIM trays are the same color as the device that houses them — so that they don’t stick out like a sore thumb — which suggests the new iPhone could be available with a black frame as well as a silver one, as some leaked parts have suggested.

Of course, it’s also possible this is simply a prototype tray used for testing, and that its color means nothing.