The notorious Flashback trojan infected 600,000 Macs over the last year. We’ve been following Flashback closely, and Apple started waging its war on the botnet earlier this month. After releasing two security updates and one final tool to remove Flashback from infected Macs, Apple has nearly killed Flashback once and for all.

According to new research from Norton Symantec research, Flashback now infects around 140,000 Macs. That’s a significant drop considering Apple’s removal tool was only released 4 days ago. 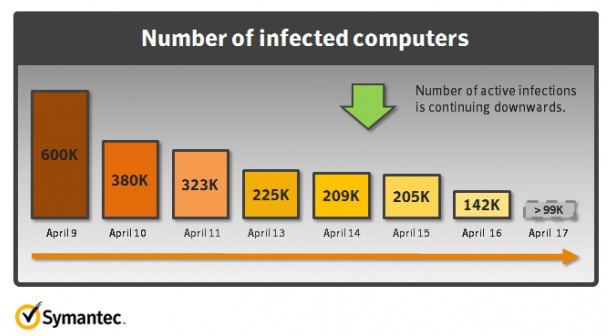 “Given the number of removal tools and Apple security updates now available, it was hoped that the decline would be greater at this point, ” Norton told Cult of Mac.  “There remains a significant number of Mac users who haven’t followed the simple and necessary steps to bring the infection numbers down to zero.”

Flashback infects Macs by exploiting Java in a browser like Safari or Google Chrome. The malware then links your Mac up to a botnet of other infected machines that are all sending web activity, logins, etc. to the same network. All this is done by visiting a malicious website and allowing a Java applet to gain access to your system.

You can disable Java on your Mac to completely get rid of any threat, but installing Apple’s Java security updates should also do the trick. There are also multiple tools for detecting and removing Flashback, including FlashBackChecker from Kaspersky Lab. It’s always smart to stay on top of software updates to keep your Mac as secure as possible.