Popular multitasking tweak CardSwitcher has been updated to version 2.0 in Cydia for iOS 5. If you remember Palm and the webOS platform, the look and feel of CardSwitcher will be very familiar. For jailbroken iPhones, this slick tweak brings the card-like multitasking environment of webOS to iOS.

If you want a change of pace from the tiny app switcher Apple has implemented when you double tap your Home button, CardSwitcher 2.0 is something you want to consider. There’s also an included multitasking interface that iPad users will enjoy.

CardSwitcher had its time in the spotlight last year, and version 2.0 was recently released as a complete rewrite for iOS 5. It’s been redesigned for speed and power efficiency, and devices running iOS 4 will also see improvements when running the latest version.

A huge improvement is that the last app you used will be displayed dynamically when multitasking (instead of showing a static image). You’ll see the current window (including the details of where you are in your Twitter timeline, for example) in the last open app before you tap it. This is a great addition for a tweak that already displays multiple app windows at once.

The new swipe gestures in CardSwitcher 2.0 also make this update a must download. After you’ve initiated the multitasking interface with an Activator action (I recommend letting CardSwitcher replace Apple’s Home button double tap for multitasking), you have several ways to close open apps. You can swipe up and swipe down on each card to close an app in CardSwitcher. Tapping the little iOS “x” button will also close an app. Make sure you leave the “Remove from switcher” setting turned on so that what you close in CardSwitcher correlates with what’s actually running in the background on iOS 5. 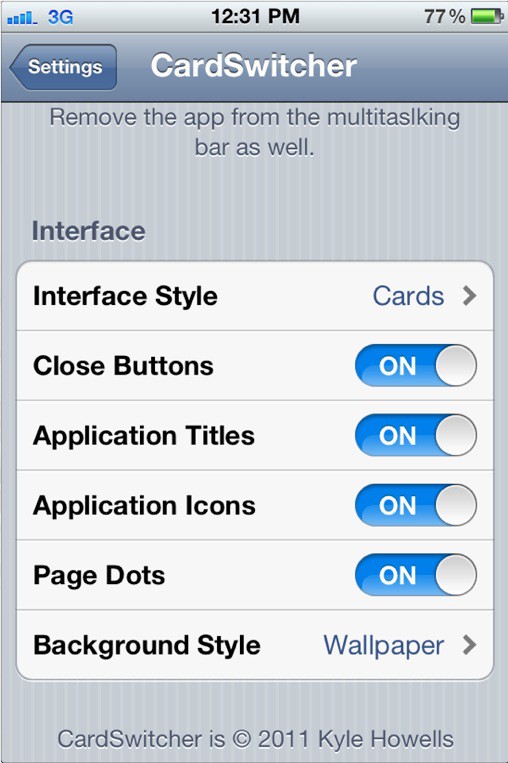 In the CardSwitcher settings you can switch between the Card and Grid multitasking interfaces. For the iPad, Grid view is a particularly attractive replacement for Apple’s tiny app switcher. You’ll be greeted with a collection of preview app cards in a grid that you can interact with and close from one window. You’ll have 2x rows of cards by default, but pinching and zooming will expand the view to 3x rows. Perfect for the iPad’s 9.7-inch display. It doesn’t look too bad on the iPhone either.

CardSwitcher 2.0 is available now in Cydia for $2. If you like this idea of multitasking in iOS, it’s definitely worth a buy.