When Apple first announced the new third-generation iPad, there were people — and, I suppose, still are people — who were disappointed. Why they were disappointed is inexplicable; what they envisioned is hard to imagine. The flying car of tablets, one supposes: they called the new iPad an “incremental update” when what Apple had just handed them may as well have come spiraling through a time vortex from the future. It’s that good.

Let’s face facts. In the last year, Android makers haven’t even been able to ship a viable competitor to the iPad 2. The new iPad, with its Retina Display and LTE technology, is unlike anything else on the market. No one is even close to making a tablet as fast, as beautiful, as vivid, as thin or as long-lasting as this, and if history is any guide, when the fourth-generation iPad comes out, they’ll still be trying to catch up.

Make no mistake. If the new iPad isn’t a “beefy” enough upgrade for you, you’re not just spoiled. You’re not just completely out of touch with the state of the tech landscape today. No, you’re bonkers. This is the most advanced piece of consumer mobile electronics tech available today.

First thing’s first. The 2048 x 1536 Retina Display is something to behold, and if you can pick up a new iPad without. It’s crispness makes fonts look like they’ve been sliced with razors out of the page. It’s colors are beautiful without being lurid. High-resolution photos on the new iPad are so crisp, so full of detail, it’s like being sucked into the photograph. As many people before me have noted, it’s like having an astigmatism corrected. One second, everything is blurry and gray, then all of a sudden, it’s in focus.

Well, with Retina Display optimized apps, at least. If an app hasn’t been optimized to use the Retina Display, it looks a little fuzzy again. That’s not to say bad, and it still looks better than on the iPad 2, but it’s slightly jarring, and makes switching between Retina-optimized and unoptimized apps like constantly getting a lash in your eye.

One surprising thing about the Retina Display is that even apps without native iPad versions look incredible. Except for the keyboard and aspect ratio, they look almost native now: they have a less blocky, less pixellated look that makes iPhone apps without a native iPad version or universal binary much less of an annoyance than they were before. In fact, if not for the crappy iPhone virtual keyboard, they’d almost be acceptable to use.

There’s only one real drawback to the Retina Display: app bloat. Video killed the radio star, and the Retina Display is going to kill 16GB as a sustainable option for most iPhones and iPads. Retina Display optimized graphics can bloat apps to quadruple their original size or more, and since most apps run as universal binaries, even if you don’t have a new iPad, your apps are going to quadruple in size due to the snowball effect. If you have a 16GB iPhone or iPad, then, the new iPad might actually be your worst enemy, as it’s opening the door to your device becoming a lot less capacious than it was before. Individuals who buy a 16GB new iPad are likely to be constantly worrying about space on their device in short order.

Is the Retina Display all that? It’s certainly impressive, but there’s more to a display than mere pixel density. Luckily, Apple seems to have kept all of the strengths of the iPad 2’s display for the new iPad’s Retina Display, then shored up its weaknesses while they were at it. The new iPad’s colors are more vibrant than they were before; the blacks blacker, the whites whiter. It is a slam dunk in every respect.

If you do happen to live within the invisible web of LTE coverage, LTE is fast. In fact, it might just be faster than your home internet connection. We tested the Verizon iPad Wi-Fi + 4G, and in our speed tests, we got 21.10Mbps download speeds in our LTE test, compared to just 2.0Mbps in our 3G test. That’s a fantastic improvement — a speed boost of ten times 3G s and helps contribute to the new iPad’s all-around feeling of snappiness, but we’re interested in seeing how this plays out over a longer period of time. We tested Verizon’s LTE network before there were many new iPads out in the wild, but if history is any guide, nothing crushes a new network like the first iOS device to support it.

A big deal has been made of the new iPad’s camera, and it’s certainly better than the piece of junk included in the iPad 2. In fact, it’s a pretty good 5MP camera, and in good light conditions, it takes some pretty excellent pics. In low light, though, it’s typically terrible, lacking the iPhone 4S’s LED flash and wideraperture.

That’s not the only way the new iPad’s camera fails to live up to the one in the iPhone 4S, but where the iPad has the 4S beat as a whole is the options available you after the footage has been slurped in. Now that is has cameras that are finally up to snuff, the new iPad has become the ultimate photography and video editing terminal. There’s simply nothing like taking a 5MP photo and making sophisticated edits to it in iPhoto on the same device, or shooting a 1080p video and editing it without ever pulling out a transfer cable. And if you prefer to shoot on your iPhone 4S’s technically superior camera, the combination of iCloud Photo Stream and iPhoto beaming makes a new iPad and an iPhone 4S a killer combo for the street photog. (If Instagram doesn’t finally come out with an iPad version of their app within a couple of months, I’ll consume a haberdasher’s inventory).

The new iPad’s extra weight and thickness is really insignificant. On paper, it’s already a tiny disction: 660 grams to the iPad 2’s 610 grams, and 9.4mm thick to the iPad 2’s thickness of 8.8mm. Apple doesn’t like to make a device thicker than its predecessor, but this isn’t the first time they’ve done so: the iPhone 3G, for example, was thicker than the original iPhone.

Either way, though, the extra thickness is unnoticeable in the hand, and indeed, even most of the most exacting cases and back cover should still fit the new iPad just fine (we had great luck with all of the cases floating around our review offices, and we get a lot of cases to review). As for the extra weight, it is noticeably heavier than the iPad 2, but the device has been weighted beautifully to actually feel better holding than the last-generation model.

Most of the extra weight of the new iPad comes from its greatly increased battery capacity, which is needed to power the more electricity-hungry Retina Display and LTE modems. We haven’t played with our new iPad long enough to tell you whether the battery life has changed, but we can speak to the fact that charging times seem significantly longer than with the iPad 2. That makes sense: Apple’s just packed more battery into a tighter space, and is not using a new battery tech. Still, be advised that charging an iPad to full is now an all-night affair.

Finally, just a word about Siri dictation. Whatever Apple’s reasons for not including Siri proper on the new iPad, Siri Dictation is a solid addition that adds reliable voice-to-text transcription anywhere you can enter text. The execution is as slick as Cupertino makes it: you simply press a tiny key to the left of the keyboard and an attractive mic overlay pops-up, oscillating and filling with purple as it records your voice. In our experience, Siri Dictation worked well, although perhaps a little less reliably than the same functionality in the iPhone 4S in a busy room. 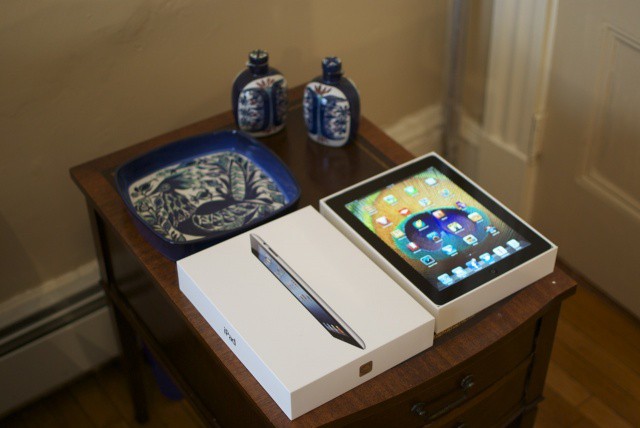 The new iPad is the best iPad yet, but at this point, that goes without saying. What’s more important to note is that it’s the most futuristic iPad to date. If the first-gen iPad was a couple years ahead of the competition, the Retina Display, battery life and LTE speeds of the new iPad seem five years ahead of the curve. The new iPad is like having a FiOS connection, a top-of-the-line 2K HDTV, and an infinitely extensible portal to the internet in your bag: all in the same device, and all at a price that anyone can afford. If there are people out there who would scoff at that achievement simply because the processor didn’t go up a couple of cores, or the physical appearance of the design, well, enjoy your Android tablets, guys. The rest of us will be using the only tablet that matters.

Pro: The new Retina display really is that good, LTE is decadent, the camera’s have been greatly improved, etc. How many pros are in “nearly perfect?”

Con: Takes longer to charge than the iPad 2. 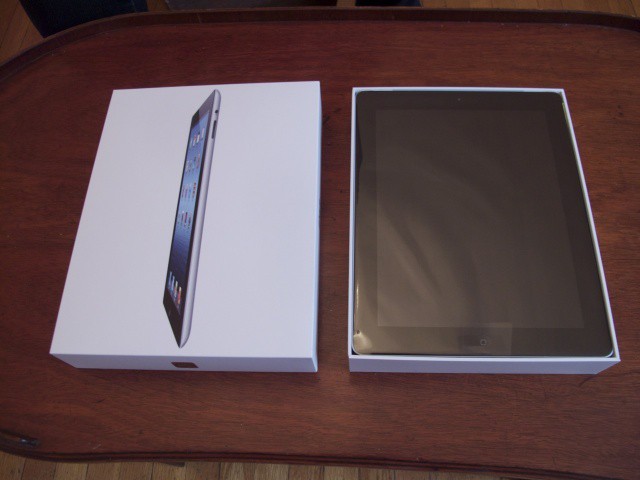 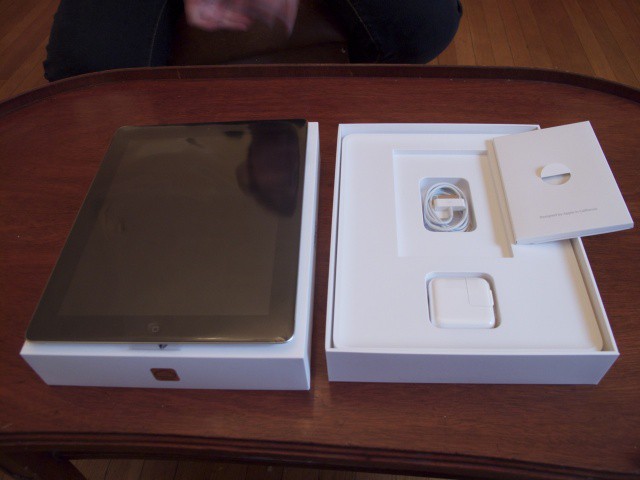