Meet the G4 Apple //c. The coolest freaking Apple mod I’ve ever seen.  This little puppy is a gorgeous Frankintosh project that houses a G4 Mac Mini in the case of an Apple //c. On the outside, the Apple //c hasn’t lost any of it’s retro charms. It’s like the ghost of Steve Jobs transported this cute little guy through time in almost perfect condition and decided to give him an update while he was at it.

The machine, keyboard, and mouse are all fully functional. Inside, the G4 Apple //c is rocking a 1.4GHz G4 with a gig of RAM, which is an insane upgrade from the 1MHz 65C02 and 128k of RAM it was cruising around with back in 1984.


The creator rewired the original keyboard so that it could be used as a USB keyboard for the Mac Mini. He even took the time to maintain many of the original parts and and updated the peripherals. The mouse has actually been fitted with the guts of an optical USB mouse and then wired to the original 9-pin connector. Oh, and did I mention that you put a DVD into this beast? Yeah, the built-in floppy disk drive was removed and provides the perfect amount of space for the Mac Mini’s DVD slot.

What I love most about this setup is the that the original Apple monochrome display is still working and carries that green hue. A trick that was made possible by building a VGA adapter to output monochrome NTSC via RCA.

Head over to Flickr to see more of the G4 Apple //c’s sexy bits. 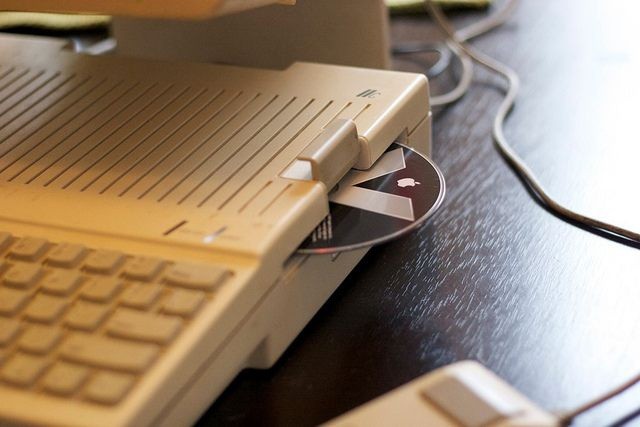