A new Apple patent published this week by the U.S. Patent & Trademark Office confirms that the company has been working on introducing 3D to our iOS devices. However, it may not be the glasses-free 3D technology we’ve already seen from devices like the Nintendo 3DS and the HTC EVO 3D.

Instead, Apple’s invention uses your device’s front-facing camera to track the position of your eyes and the location of light.

Patently Apple, who discovered the filing, notes the technology could work alongside previous Apple inventions based on head tracking and ambient light technologies. It uses a number of the sensors built into your device — such as the compass, accelerometer, and GPS — to create a “3D frame of reference” for the device.

Once it has that frame of reference, the device could then track the position of a user’s eyes using its front-facing camera to provide a 3D effect to the objects displayed on its screen, which would automatically react to movements in front of the camera.

Patently Apple notes that using this technique, Apple could employ a number of different 3D effects. For example, it could place realistic shadows around objects within its user interface that respond to a user’s movements, shifting the shadows around as you move your head.

Alternatively, it could create a “virtual 3D operating system environment,” the filing reads, which would allow a user to “look around” the interface on their display — as though the screen was a window into a world of 3D objects. 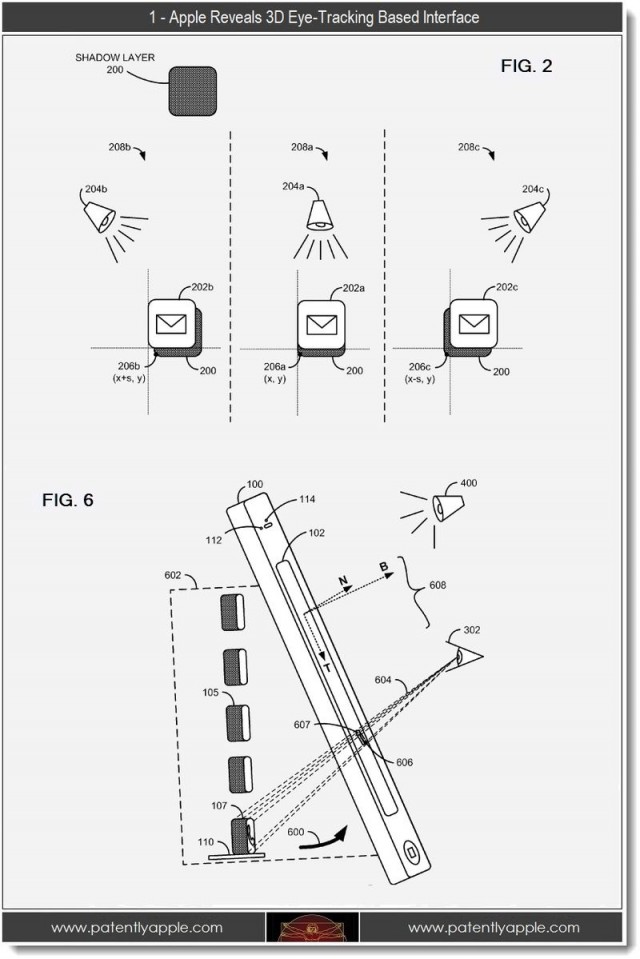 The technology may not stop at mobile devices, either:

Using this data, it would then be possible to depict a realistic 21/2D or 3D operating system environment mode, e.g., through putting shines on windows, title bars, and other UI objects, as well as having them move in response to the motion of the user’s eyes or the changing position of the user’s head. Further, it would also be possible to use the position of the user’s head and eyes to allow the user to “look under” a window after the user shifts his or her head to the side and/or moves his or her head towards the display.

It all sounds very cool, but will Apple’s system be accurate enough to provide a usable 3D effect? I can imagine by using the front-facing camera, other objects could be picked up in the background that might pass as eyes, providing the user with a very odd looking user interface.

Of course, this patent doesn’t mean this method will definitely be employed by Apple, or that iOS devices will ever get 3D capabilities at all. But it’s interesting to know Apple is certainly working on it.

Would you like a 3D iPhone? Or do you think 3D is just unnecessary on a smartphone?