Apple broke from its traditional June unveiling for the iPhone 4S, choosing instead to launch the device at a dedicated “Let’s talk iPhone” event in October. But we may not have to wait until October of this year to see the iPhone 5.

According to one analyst, the sixth-generation device will get back its traditional June announcement at Apple’s Worldwide Developer’s Conference in 2012.

The story comes from Daiwa Securities — via the Commercial Times — which claims that Apple’s next iPhone will get the same WWDC unveiling given to the iPhone 3G, the iPhone 3GS, and the iPhone 4. Furthermore, the company claims the device will utilize “glass to glass” touch panel technology that will be supplied by TPK Holding and Wintek.

The report isn’t a huge surprise to most, who didn’t expect the Cupertino company to make its October iPhone event a permanent fixture. Many reports circulating before the launch of the iPhone 4S last year claimed 2010’s iPhone event was simply delayed so the company could perfect its iPhone 5, which was postponed at the last minute and substituted for the iPhone 4S.

Apple is yet to announce the date of its WWDC event for 2012, but a previously leaked calendar from San Francisco’s Moscone Center suggests it could happen between June 10 and June 15. This week was held for a “Corporate Meeting,” which is the name typically used for Apple events. 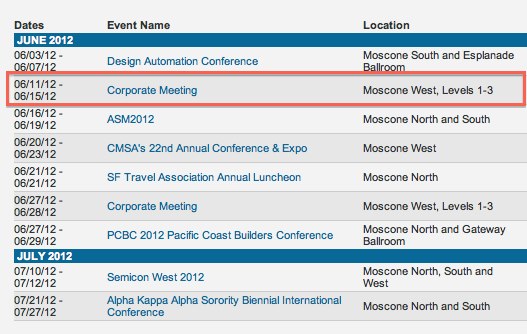