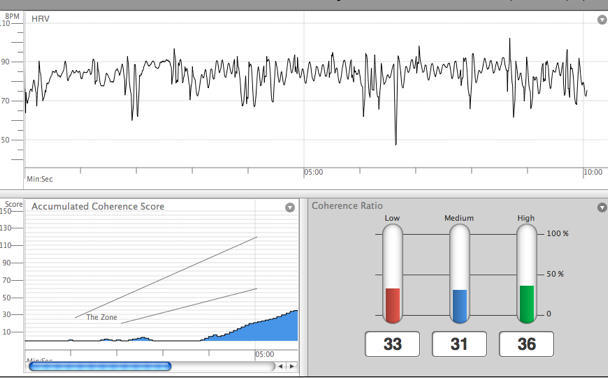 Ready to head-butt your Mac from the onslaught of everyday annoyances?

Use it for something better: emWave is a handy stress reducer just released in a Mac version that charts your heart rate and trains you to relax.

It’s the brainchild of Doc Childre, who founded a company called HeartMath in 1991 to create medi-gadgets for people seeking relief from stress and looking for greater mental clarity.

What is it?
Billed as a “Stress Relief System,” it promises big but comes in a small package.  You get an ear sensor for your heart rate that plugs into a USB key and a software program that monitors your heart rhythms and breathing, plus a CD training guide.  Initially unimpressed, after taking emWave through its paces for 10 days, I’m convinced nirvana may be something other than a band.

Details and full review after the jump. 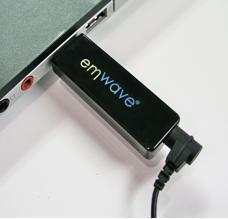 emWave’s USB key with the pulse sensor plugged in.

The goal of the gadget is to coach you into a zone called “coherence,” defined as a highly efficient state where all the systems of the body work together in harmony.  A breathing pacer gets you going steady, while you concentrate on pleasant memories and feelings centered around your heart.

Thought the Heartmath literature bases the mind-heart connection on scientific research, for analog meditators the concepts behind emWave will sound familiar — concentrating on the heart and good feelings owes a lot to Buddhist metta meditation, for example.

Meditation teachers often give the basic instruction to “watch the breath,”  the advantage of the computer-assisted version is that you can literally watch your breath on screen, see when you’re getting in the zone and then train yourself to stay.

The program’s coach feature let’s you “watch your breath” while listening to relaxing music.

How does it work?

You install the emWave software, then plug in the USB key. Your pulse is measured through the ear sensor, it clips on your lobe and plugs into the USB key. Hit start on the opening screen and once it gets a steady reading on your heart rate, you’re off.

The minimal set-up — unlike the intriguing but complex brain training systems explored in the excellent book “Mind Wide Open” —  means that with enough practice, you might be able to use it traveling or, if you have some privacy in the office, to calm down after particularly nasty conference calls.

As someone who has tried to relax through meditation only to find myself obsessed with what’s for lunch, I was curious to give a computer-assisted method a spin.

Mac integration is seamless, my only minor gripe is the taped one-hour training class available from the website (you can follow live, too) is in Mac-unfriendly .wav format.

emWave will set you back $299 — at $10 a donation, around seven months of weekly meditation class —  but if you don’t gel with it, there’s a 30-day refund policy.

My first session with emWave wasn’t a quick fix, however. The earpiece pinched like an ill-fitting clip-on earring and bell-tolling sounds the program makes to let you know which zone you’re in (low, medium or high) just increased anxiety.

Staring at the screen, watching my heart rate (erratic from being both jet-lagged and cranky) didn’t induce relaxation.

The second session, a day later, I muted the program sound, put some new-agey relaxation music on iTunes and closed my eyes. Doing it this way, I doubled the high zone (66%) while the medium zone was 21% and low zone just 13%.

Your training goal is to reach a session with 100% high zone “coherence.” Being able to see the results and knowing I’m more likely to find 10-15 minutes a day at the computer rather than a silent place to sit, convinces me that over time emWave could become a useful daily practice.

Later practice sessions using the coherence coach feature — essentially a breath pacer and relaxing music — got me nearer to 100%; both the ear sensor and graphic display became less annoying.

A second opinion: A male friend who had never meditated for a minute took a spin and immediately “scored” much higher than I did.  The only instructions I gave were to let the ear piece monitor his pulse for about a minute before slowing down his breathing. 10 minutes later, he had a 56% high rating, 35% medium, 9% low  — and a smile on his face. (emWave automatically saves your results in a progress report and can track multiple users.)

Summing up, emWave would be a good bet for the stress challenged who:

— don’t have easy access to a meditation class or are put off by traditional techniques
— prefer a scientific approach, like to see results
— enjoy video-games (three are included, in one your “good” breathing powers a hot-air balloon around the world.)
— don’t have time to sit in meditation but spend plenty of time sitting at a computer

If you’ve tried it, let me know about your experience in the comments.