Seems like there’s been an explosion of small, portable, Bluetooth speakers onto store shelves this last year — the most popular or well-known of which is probably the Jawbone JamBox — from the advance notices we’ve seen, in a few weeks the Consumer Electronics Show in Vegas will herald a whole new crop of the little tribbles.

Monster’s take on the concept is the Monster iClarityHD Precision Micro Bluetooth Speaker 100 ($100). And like pretty much everything the company puts out, the iClarity is bassy and L-O-U-D.

Man, does this lil’ guy’s ability to throw sound impress. A slack-jawed “Wow” was one reaction I got from a friend who heard the iClarity in action (and couldn’t figure out at first where the sound was coming from); and when I took it to the local basketball court/park, I was able to hear streamed talk radio clearly from across the court — even with a somewhat noisy background.

Sound quality is pretty good too, considering how tiny the iClarity is. The unit’s speakers proved exceptional when used for watching movies, listening to talk radio or taking phone calls, and there was a surprising amount of bass. And although it wouldn’t have been our first portable speaker choice to rock out with, it wasn’t bad; sound was deep, but somewhat muddied and got fairly buzzy on bass-heavy tracks. Overall though, the iClarity performed considerably better than its tiny speakers should have warranted.

Battery performance was also pleasantly surprising. The five-hour-rated battery ended up lasting over at least six at moderate volume — plenty of juice for a day’s worth of on-the-go sound. Charging the device up again took just over three hours through its rear mini-USB port (as a plus, the iClarity can be charged while being used).

Initial pairing was easy, and the iClarity automatically connected to the last device it was paired with each time it was switched on (though that was a slightly annoying two-step process — see below). A beep sounds and two very (annoyingly) bright LEDs glow blue when connected. There’s also a standard 3.5mm input jack for times when a Bluetooth connection is not possible.

The iClarity really is probably the most portable wireless speaker we’ve come across; besides its tiny size, its stable base made it easy to use, for instance, on a car’s dashboard. The icing on the cake is an included cloth bag for portage.
The Bad:

The iClarity’s noise-cancelling microphone doesn’t have the pickup sensitivity we would have liked; callers strained to hear me unless I was close to the device, or holding it closer to my mouth — sort of defeating its purpose.

Switching it on and connecting is a two-step process that requires toggling a rear power switch, then holding a power button on the device’s side; couldn’t Monster have consolidated this into a single step?

Correction: The iClarityHD can indeed receive a charge while being used.

Then there’s that pair of annoyingly bright blue LEDs on the very front of the unit that glow like a runway beacon — unfailingly, and with no way to turn them off except severing the Bluetooth connection.

If there were some contest based on the amount of sound per square-inch, the iClarityHD would win handily, and it’s few niggling little shortcomings aren’t enough to detract from its portability and mighty volume. 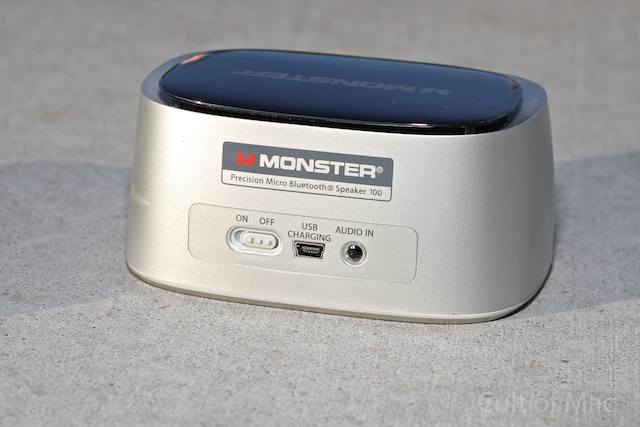 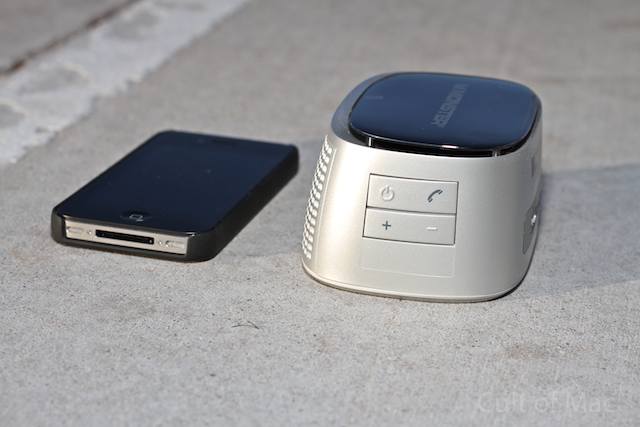 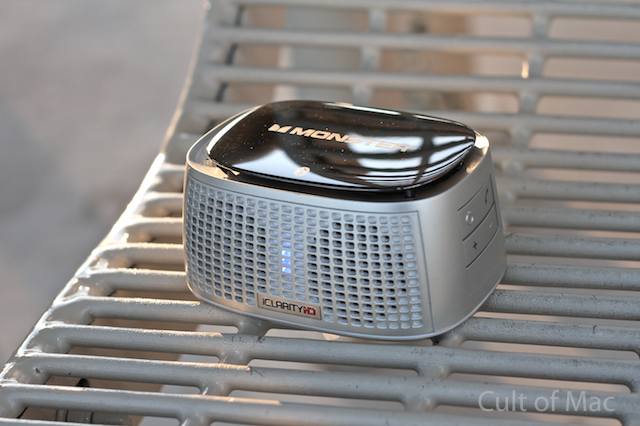 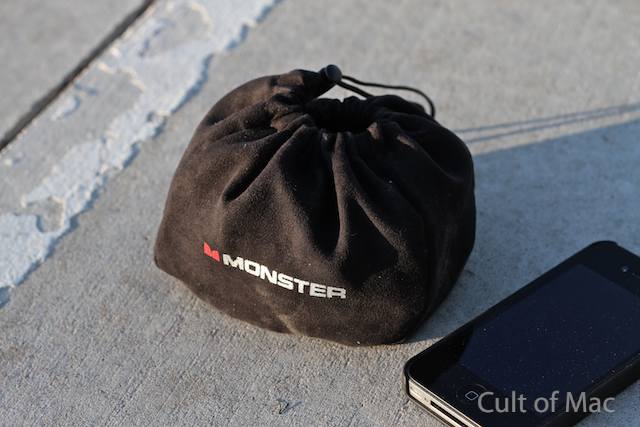