From the cockpit to the squad car and everywhere in between, 2011 was the year the iPad became a part of business. Throughout the year, we’ve introduced a number of jobs that have adopted the iPad and we return to see how Apple’s tablet has reshaped industries big and small. In fact, the jet you take for your holiday travel may be co-piloted by the iPad 2. 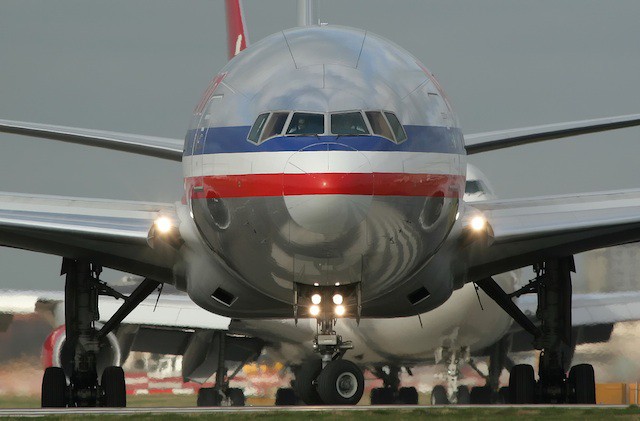 For the first time, American Airlines will use the iPad in the cockpit throughout flights of its Boeing 777. Earlier this week, the FAA gave final approval to the full use of iPads, replacing around 38 pounds of operating manuals, navigation charts, reference handbooks, logbooks and more. A pilot’s flight bag of some 12,000 pages will be reduced to the 1.5 pound Apple tablet.

Just what does this mean for pilots? It’s the start of a whole new generation of flight. “The introduction of iPads ensures our pilots have essential and real-time information at their fingertips at all times throughout the flight,” said United Airlines Captain Fred Abbott, also the airlines’ senior vice president of flight operations. The company gave 11,000 iPads to its United and Continental pilots. Delta was the first to adopt the iPad as a way to reduce weight and save 326,000 gallons of costly jet fuel.

Not only pilots have become iPad fans. The critical business of health care is another area which is drowning in paperwork and view the tablet as a rescue line. At the St. Louis Urgent Care, an iPad is used from the moment a patient steps through the door until she leaves. Although a growing number of medical practices use laptops to take patient history, the iPad is becoming a popular doctor’s assistant for its wide range of features.

Nurses use the drchrono EHR app to input patient information, while attending physicians appreciate the app’s checkboxes and menus as an alternative to notoriously bad handwriting and often poor typing. Patients themselves like the Muscle and Bone Anatomy 3D app which uses the iPad’s high-resolution screen to display broken bones or illustrate how a complicated procedure.

In an area where charting mistakes could mean the difference between life and death, the iPad means the “chance for information loss is almost zero,” one doctor explained.

Even the iPad’s camera comes into play for medical professionals. Earlier this year, Philips introduced a $0.99 app that uses the tablet’s camera to measure heart and breathing both noticing your facial color and chest motion. The app, which the company stresses is for entertainment purposes only, even features a way to post your results on Facebook and Twitter.

Far from sterile medical atmosphere or the airline flightdeck, the iPad is being used to modernize even the most manual jobs. At an Ohio quarry, the iPad has become an integral part of the rock crushing business.

“The days of a plant operator sitting in front of a monitor in a control center are no more,” Duff Quarry owner Ross Duff tells us. “We have been able to increase production, monitor material quality, and save time with the iPad. Most importantly the iPad allows our plant operator to travel conveyors, as well as start and stop the plant in person. This allows for the most important benefit of using the iPad, which is increased safety at the mine,” Duff adds.

If you’ve witnessed law enforcement up close or simply by watching cop dramas on television, you know how information has become as integral a part of walking the beat as a service revolver or handcuffs. From the FBI to local police departments, the iPad has become a partner in the fight on crime and an advocate for community policing.

We talked of how the FBI and local agents may soon use the iPhone and iPad to collect fingerprints and quickly identify potentially dangerous suspects. Near Los Angeles, Calif., the City of Redlands Police Department are quick to sing the praises of their latest recruit. “It’s as integral as their police radio, or any of the other critical equipment on their duty belt,” said Jim Bueermann, the city’s Chief of Police.

Along with a communications tool, the iPad also displays local maps and displays, even replacing the once ubiquitous notepad with the on-screen keyboard. For the public, often put off by the police’s commanding presence, seeing officers with an iPad can be a way to bridge that divide by talking about the Apple tablet.

Away from the mean streets of policing, the iPad has found a use for architects accustom to consulting layouts, drawings and designs. Here, a number of specialized iPad apps have found a wide audience. At its simplest, architecture is about drawing — detailed and exacting drawing. The AutoCAD WS app lets you sync CAD drawings out in the field with those stored on your office desktop. Another app, GraphPad, is touch-based and lets architects quickly sketch out tentative designs and scale them. Other apps give architects scopes, develop budgets, add bubble diagrams and include project cost analyses.

Even if you are just a designer, there is Home Design 3D, allowing you to decorate rooms, add furniture and export the results to scale.

Lastly, journalism has vastly changed with the iPad. The lightweight tablet can replace the usual notebook with apps such as Notability or Penultimate. I often use iMessage to send quick questions, even photos from a news scene. Instapaper is great for collecting interesting articles I don’t have time to immediately read. The AudioMemos app is perfect for recording a quick voice interview. while Dragon dictation offers usually accurate transcription.

The iPad, first conceived as a media device has expanded to become much more. While in its infancy the iPad was the perfect game machine, the Apple tablet has become equally comfortable in the boardroom, as well as the cubicle or corner cafe. Any questions whether the iPad could meet the demands of business have been answered — many times over.

So, what should 2012 bring for the iPad in business? We are likely to see an even faster adoption of Apple’s tablet as the economy hopefully begins to perk up. The iPad 3 could have more features suited to business, while talk of a lower-priced iPad could do for the tablet what the price drop of the iPhone 4 and iPhone 3GS did for smartphones. We can’t wait to see.