Could it get any sadder? Ten years late, Microsoft is finally set to open its sad sack retail store later today at Tysons Corner, pretty much directly across from the original Apple Store that started it all way back in 2001. Needless to say, the world’s pretty much yawning at the news, and so Microsoft is trying anything to get people to attend the grand opening. I’m not sure what’s sadder, though: the fact that they hired a Jonas Brother to draw in crowds, or the fact that the Jonas Brother they hired, Joe Jonas, is both a Mac user and a former entertainment act for Apple, famously drawing scores of screaming teens to the SoHo Apple Store in 2008. 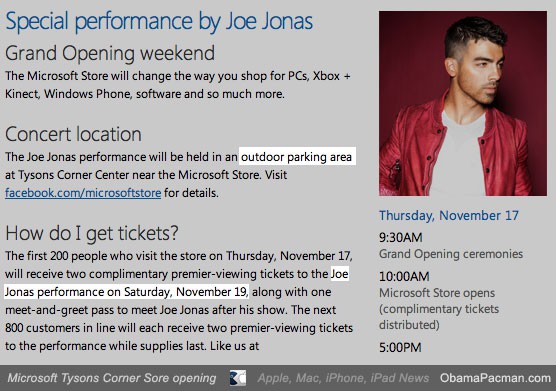 ObamaPacman, who spotted this pretty little faux pas, puts it best: “Basically, [Microsoft is] giving away a chance to meet a Mac user to promote the Microsoft store.” That about sums up Microsoft’s corporate confusion in an Apple-dominated retail landscape, don’t you think?
Number of comments on this postLeave a comment