The team at 6Wunderkinder is well known for Wunderlist, one of the best task manager apps for the Mac and iOS platform. Wunderlist has quickly become a favorite among the GTD (Getting Things Done) community, and it remains one of the slickest task managers with cloud sync in the App Store.

6Wunderkinder has a new project up its sleeve called Wunderkit, and it looks like a dream come true for the collaborative productivity app scene.

The developers are currently accepting requests for beta invites to Wunderkit, a new, “drop-dead gorgeous” app that aims to help you create, organize, and get things done with your team. 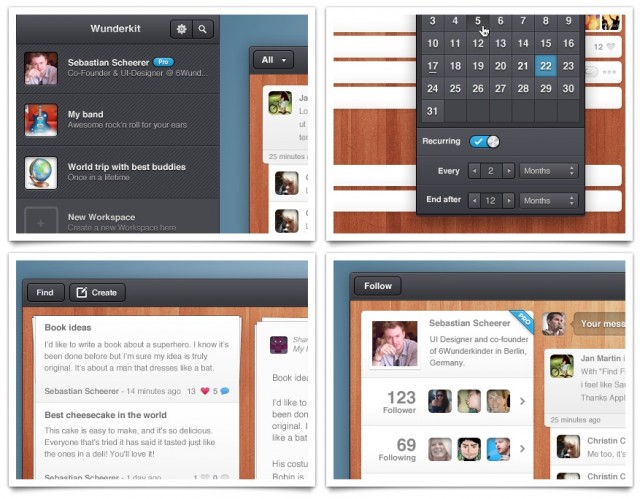 Whether you’re a small business, creative team, or a group of people needing to work together and collaborate online, Wunderkit looks like it could be the answer, thanks to 6Wunderkinder’s cloud sync backend that will power Wunderkit across a variety of platforms.

The app incorporates workplaces, notes, profiles, and other collaborative tools to help you communicate more efficiently with your team.

Based on the teaser screenshots, the Mac app looks beautiful. We can’t wait to see what the developers have cooking in the iOS department.

Here’s a fun video from 6Wunderkinder that details how the Wunderkit couch graphic came to be:

Unfortunatley, Wunderkit is in private beta at the moment. You can register here to receive a beta invite as they become available.

Who’s excited for Wunderkit? We sure are!