Is your iPhone about to die, and you’ve lost your cell phone charger? An Australian design student now has an answer: just get moving. The Viber Burst design concept will turn walking, jogging or any movement into a cell phone battery recharge in just two seconds.

“Viber Burst can be worn as a feature piece of contemporary jewelry on footwear, it can also be a key ring or kept in a handbag,” designer Josh Pell said. The device includes a variety of designs and colors that “enable the user to connect with the product on an emotive level,” the Swinburne University student told the Australian Design Awards.

Although no production date was announced, the Viber Burst can attach to your shoe, purse or be held in your hand. The device is weather resistant and built to withstand punishment: the components use a flexible circuit board. When a product does appear, look for it in recycled packaging, designer Pell said. 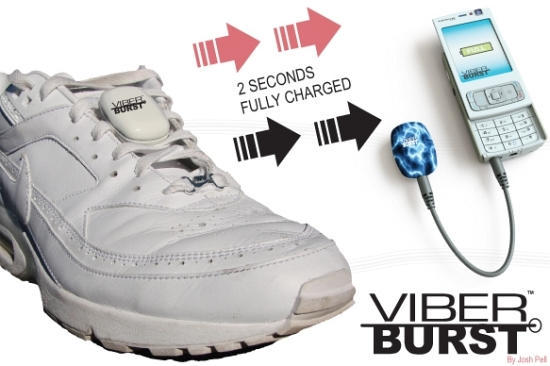 The Viber Burst is not the first device aimed at harvesting natural energy to power our electronics. Earlier this month, Tremont Electric unveiled its nPower PEG (Personal Energy Generator, which can recharge a cell phone with just an hour of activity. The inventor, Aaron LeMieux, came upon the idea after walking the 1,500-mile Appalachian Trail.

Nokia earlier this year also introduced a way to harvest energy that usually goes to waste. Nokia’s UK researchers developed a way for its phones to collect 50 milliwatts of ambient energy produced by radio waves from TV towers, Wi-Fi transmissions and elsewhere. Phones using the technology will appear in the next three to five years, according to Britain’s The Guardian.

The onslaught of kinetic energy charging devices come on the heels of a EU decision designed to increase the ‘greening’ of cell phones: a universal standard for chargers.

Apple is among the cell phone makers who have agreed to support the Micro-USB as a standard for future rechargers. Up until this time, each handset used a customized charger which often was thrown away when a different phone was purchased. Along with Apple, Motorola, Nokia, Samsung, Sony Ericsson, LG, RIM, NEC and Qualcomm will support the standard.

Cell phone rechargers using the Micro-USB standard will appear starting in 2010, according to reports Monday.