Take a gander at the flock of reader comments under any canalphone review and one thing should become quickly apparent: canalphones are kinda flimsy.

The few chances we’ve been given to play with V-Moda’s creations have given us the solid impression that the company is paying much closer attention to the survivability of its canalphones; and that maybe they’re paying more attention to that factor than any other outfit. In fact, the three-button, microphone-equipped V-Moda Remix Remote ($80) seems like it should be the most bombproof  canalphone in its range — and it hasn’t proved us wrong yet.

V-Moda really seems to have pulled out all the stops to keep the Remix Remote from wearing out prematurely, short of wrapping the entire thing in duct tape.

The kevlar-reinforced cabling looks thick enough to attempt a Luke-and-Leia-style Swing to Freedom, and it’s wrapped in a smooth cover that resists tangling — much better than the noisy fabric used in older generation V-Moda IEMs. The junction where the cable meets the jack is the most over-engineered I’ve ever seen in a canalphone. Even the attachment clip is massive.

It comes with all the trimmings: a microphone for calls; a rubberized three-button inline remote that adjusts volume, controls track playback and answers calls; and the previously mentioned clip. The controls and microphone are a pretty good bargain at this price, and the buttons were easy to use and worked well, as did the mic (with one caveat — see below).

V-Moda has always steered to the more fashion-conscious side of things, and the Remix Remote is no exception. The set is good-looking, without being obnoxious about it.

Sound quality wasn’t particularly overwhelming, especially when compared with other IEMs at about the same price, or just a little more expensive. Bass is there, yes — but it doesn’t have the smooth quality apparent from, say, a set of single armatures, like those in Etymotic’s ER-6i. Also, highs and mids seem flat and uninspiring; although if you’re listening to a lot of thump or rock, you might not notice the deficit as much.

The Remix Remote’s real Achilles’ heel is its poor ergonomics. I’ve never been fond of V-Moda’s eartips; they’re difficult to achieve a proper seal with, and the Remix Remotes only come with four different sizes (that’s low, compared with many other IEMs around this price) and they’re all made from silicone — no foam tip option.

The earpieces’ small size and rounded profile may lend them a more attractive look, but they also made it difficult to insert and remove.

You’d think V-Moda could have made left/right identification of each earpiece more obvious, instead of making the tiny lettering a similar color to the earpiece bodies and hiding them under the eartips — especially considering there’s no other way to tell them apart.

While the Remix Remote’s microphone was sensitive enough to pick up my voice well during calls, it seemed difficult to keep the mic from rubbing on clothing, as the microphone-contol body is at the junction where the cables split, much lower than in most other models with microphones.

Good bass, solid controls and truck-like construction; not for those with finicky ears, either with regard to sound or fit. 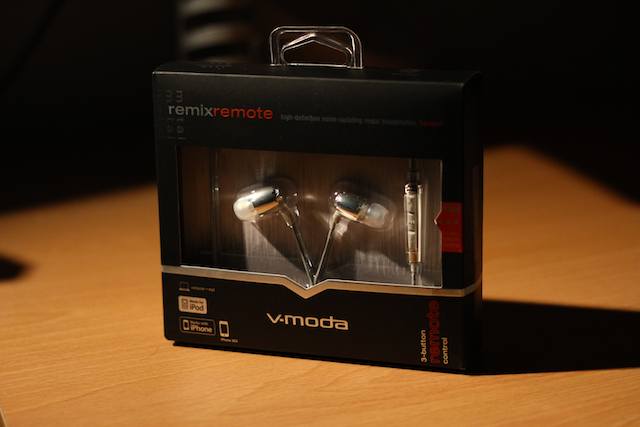