Earlier this week, a report surfaced claiming that Apple is currently working on a more affordable model of its iPhone 4, which is set to launch alongside the iPhone 5 later this year. The device will reportedly be aimed at those looking to purchase an iPhone with a tight budget, and will have just 8GB of storage in order to keep costs down.

This got us thinking: how would Apple bring down the price of an iPhone 4 to appeal to low-cost subscribers? How exactly would they make an iPhone 4 that would cost $50 or so with a two year contract? We’ve been speaking to Miroslav Djuric of iFixit — a popular online repair shop that produces how-to repair guides and tear-downs — to try and find out, and we think we know how Apple would do it. Here’s how.

Firstly, we wanted to know whether a cheaper iPhone 4 was really feasible. According to Djuric, there are a number of ways in which Apple could dramatically reduce the price of its iPhone 4: in addition to decreasing its storage to just 8GB, Apple could use a cheaper version of its Retina display — specifically, the one used in the iPod touch.

The Retina display used in the iPod touch isn’t as good as that used in the iPhone 4. Just take a look at the way in which Apple describes the two on its website: 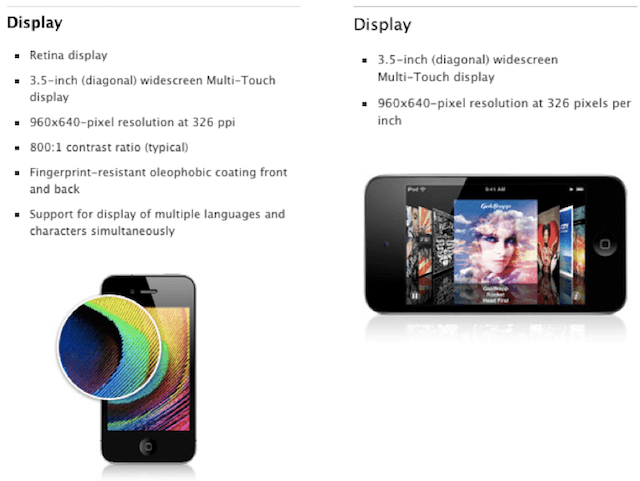 Clearly the iPhone 4’s display is a little more advanced that than of its cousin, and therefore it’s more expensive. Do away with that and use the cheaper one, and our budget iPhone gets even cheaper.

What about that fancy Gorilla glass? It’s possibly Apple could exchange this for a high-quality plastic, or even a metal for the rear-casing. Not only does this reduce the cost of the device, but it would likely also decrease repair costs, because the device isn’t going to break as easily as today’s delicate iPhone 4.

Lastly, do we really need that fancy 5-megapixel camera? Sure, it’s irreplaceable to some of us, but for those who don’t take too many snaps, wouldn’t a 2-megapixel camera suffice? Better yet, how about taking another part from the iPod touch? The iPod touch’s camera is just 0.69 megapixels — making it significantly cheaper once again.

So these are the most obvious ways in which Apple could produce a budget iPhone 4, but when you think about the steps Apple would need to take to implement those changes, it may not prove so cost affective… especially when there’s another, less bothersome way to make a budget iPhone 4.

… But Apple Has An Image To Maintain…

“Apple could cut costs by using the existing stock of yesteryear’s processors (aka the A4 processor currently in the iPhone 4) and then implementing less storage, cheaper Retina display, and even downgrading the camera. But some of those changes — especially downgrading the camera — requires their engineers to re-develop the cheaper phone, which may end up costing more money overall than just leaving the phone as-is and selling it as a lesser counterpart to the 5. “

Also, we have to think about the company’s image. Apple is famous for its premium products, built from high-quality materials that are designed to last, and look good. A plastic iPhone 4 that scratches the second you place it on a rough surface and dies every 8 hours because Apple used a cheap battery isn’t going to make for a happy consumer.

“Apple has worked hard on establishing itself as a manufacturer of premium products, so I don’t think there’s going to be a “cheap iPhone 4″ per se. They may employ some cost cutting measures to keep device cost at a minimum, but I do not believe that the iPhone will *look* any different than it does currently. Having said that, I find it unlikely that they will use plastic instead of glass/metal for the phone’s exterior.”

“If Apple changes anything to make the iPhone 4 cheaper, it would be the memory storage. It should be fairly trivial for them to put 8GB instead of 16/32, as that should not require any large engineering effort. That may save them a couple of bucks per phone, so it won’t be a huge per-unit savings, but the savings may add up after selling millions of units. Downgrading the storage capacity will also further enhance the gap between the new and old generations.”

… And Why Bother When The iPhone 4 Is Already Good Enough?

With that being the case, what’s the most likely method Apple will use to make a cheaper iPhone? Well, it’s obvious when you think about it:

“Funny enough, I think the best method for Apple to make a “cheap” iPhone 4 is to release the iPhone 5. They’re immediately going lessen the previous generation’s value without lifting a finger, just like the 4 did to the 3GS. And all of a sudden the 4 will be perfect for folks who want a “value” phone and don’t care about the latest and greatest.”

Djuric’s points make a lot of sense. There’s no way Apple would use low-quality components to cut costs, as previous reports have suggested, that’s just not the way the Cupertino company works. What’s most likely is that it will simply follow the process it has taken with previous iPhones: release a next-generation device and then slash the price of older models.