The first question that should leap to mind is: “Why on earth is CoM reviewing Windows?” Frankly, for many professionals, we have no choice. Many of us have to use Windows software in the course of our jobs, or at a minimum use web applications that require that bane to open standards developers everywhere: Internet Explorer.

There’s no easy way to do this, so lets just rip off the band-aid and see if there’s a scab underneath.

disclaimer: this review is based on a pre-release version of the software. The software may change, but the sarcastic ass tone I use to say the word “Windoze”Â will not

THE INSTALL
TO VM OR NOT VM – THAT IS THE QUESTION
Even thinking about installing Windows on my beautiful, pristine MacBook Pro makes me feel dirty. Dirty -like “walking-in-on-a-sibling-in-the-shower-and-finding-yourself-aroused” dirty.

Ack! I need to go wash my eyes out with bleach. BRB.

(Editor’s note – for about thirty minutes it sounds like Leigh is playing Texas Chain Saw Massacre at full volume in 7.1 surround sound in his office. Not the campy Tobe Hooper version, but a version re-imagined by Rob Zombie.)

There is no freekin way I’m gonna dual boot this beautiful machine into Windows, not even for you people. The good news is that VM Ware works just fine even with a pre-release version of Windows 7. In fact Windows XP virtual machines boot faster in VM ware than they do on a similarly spec’d (to my MBP) Dell. Go figure.

SETUP & CONFIG
Launching the installer’s boot-loader is fast – crazy Apple fast. I’m wondering what’s going on here, within 30 seconds, I’m at the first install screen.  This is not turning out like I expected. I’m presented with a simple and easy-to-understand installer screen that has very few options, just basic keyboard layout and language stuff — way to go MS, you guys seem to be learning. Fast as those words leave my lips, I’m presented with the next screen. 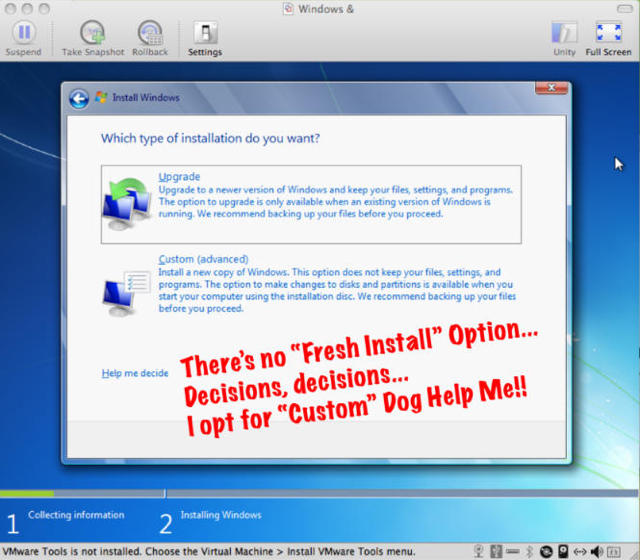 I don’t understand, what is there to upgrade? There’s nothing there, it’s a blank VM. Lacking a reasonable option, I fearfully press “Custom (advanced).”

As a Mac user the whole notion of “Advanced Windows Configuration” scares the every living crap out of me, but I drive boldly forth. Be calm.

Turns out –and I shit you not– the “Advanced Windows Configuration” option was picking which drive to install to. I was so freakin flabbergasted by that I forgot to take a screen shot.

The rest of the install is seamless, and fast I think the MS boys have finally gotten the fast thing. The whole install takes less than 30 minutes.

USING WINDOWS 7
Well it doesn’t really take 30 minutes. In Windows 7 Microsoft stripped out all the Windows Essentials fun-tools. That’s how they achieve that speedy half-hour install. To get a fully operational OS is actually going to take a bit longer. How much longer? I don’t know, because I’m not even going to try. But because this is Windows, I am going to install the McAfee Anti Virus. Virtual Machine or not, you’re dog-damned sure I am.

And here we hit our first snag. McAfee won’t run on this version of Windows. It doesn’t just tell me that though. It pops up half a dozen blinking Las Vegas dialog boxes I have to click through before I’m told — finally — that I’m to remain vulnerable to ten-hundred-zillion different forms of malware. 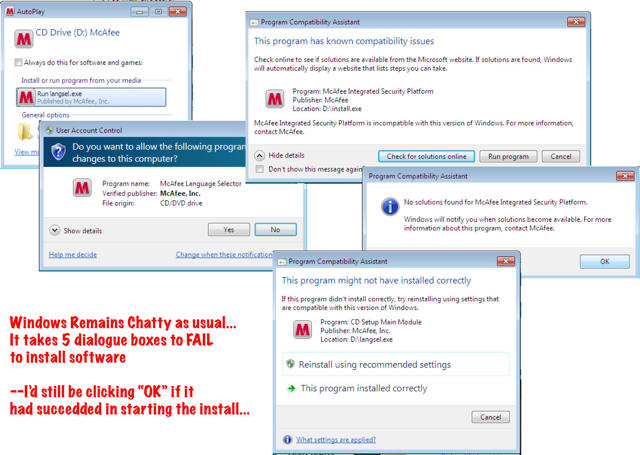 Momentarily I consider turning off network access to the VM. But I can’t: I have to try out the fabled Internet Explorer 8 first. So with one hand gripping the Ethernet cable — ready to snatch it away like a switchblade from the hands of a toddler — I double-click the infamous spinning globe icon.

This wouldn’t be so bad. You fire up iTunes for the first time, you have to accept the EULA. But each one of these shows up as a separate dialog box. Plus, they are all at a totally random location on the screen. Trying to anticipate where I need to click next is like some kind of sadistic game used by interrogators at Gitmo.

IE is almost up, and it informs me that something called Windows Live Search will be my search engine of choice. It didn’t ask me, it told me.

Well that won’t do. Not even for a review. I go to change it. Thankfully it doesn’t take just a second to find out where to add different engines, when it pulls up the list of available ones I find: 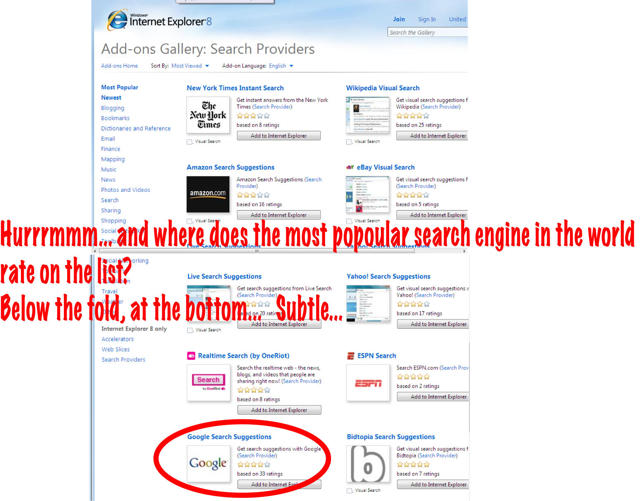 Well I’ll be dog-damned if Google doesn’t rate below the fold at the bottom of the page of the “most popular” search engines. I set it up for Google. But then I can’t actually go anywhere, because I couldn’t get McAfee to work, and now we have malware that can infect Macs from within a Windows VM.

I turn off all networking to the VM and continue — Ya damn right I do.

THE IMPROVED WINDOWS USER EXPERIENCE
I don’t see it. I really don’t. I know I’m a Mac guy, and I’m biased, I get that. But I’m gonna take a moment and explain to the Windows using world what you don’t get. Your OS and the applications that run on it lack a cohesive metaphor.

By that I mean, it seems like this shit was designed by a committee of retarded monkeys. It doesn’t even have the consistency of design that a single retarded monkey could achieve.

Oh I know, I’m just picking on you poor Windows users now, mean-old-Leigh. But answer for me this question: In Windows, what is a Window?

Is it an Application, or a Document?

THE NANNY OS
If OS X is like a quiet, reserved English butler, not bugging you, just anticipating your needs, then Windows is like The Nanny staring Fran Drescher — complete with that annoying, squeaky Long Island accent.

Poking around, I find the games folder — rock on. Windows really excels at games. It does. The only MS product I unashamedly own is my XBox 360. 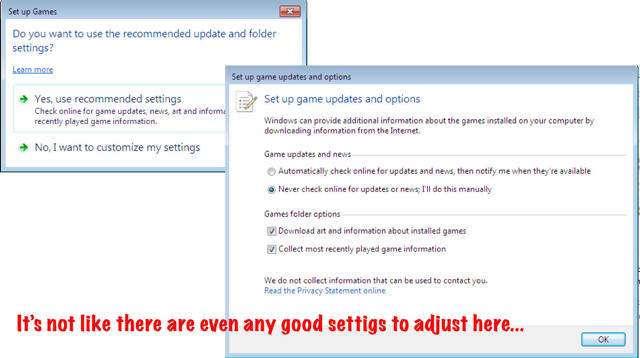 WTF? More dog-damned dialog-boxes. Are you kidding me? What does the Nanny want me to verify for her now? And when I drill in, it’s not as though the “advanced options” were worth a crap to be able to adjust anyway.

I mean sure, if you wanted to adjust those options in OS X you’d have to comb through five manuals, ask people on a hundred and thirty seven different help forums, and eventually, give up, only to have someone write you six months after OS upgrades antiquated the options in the first place giving you an answer. But c’mon, sometimes, just sometimes, isn’t it better to sacrifice a little useless flexibility in favor of ease of use?

Not in Redmond it ain’t.

I exit the game I was playing, and am presented with the following: 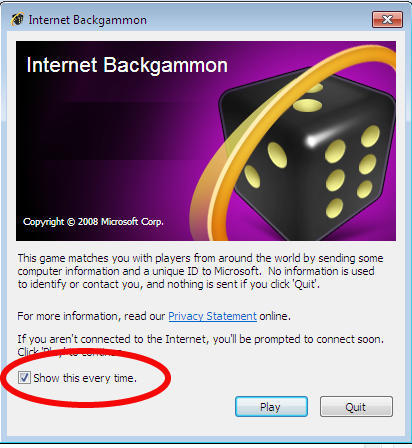 Show this every time is the default option??!!! Who the fuck in their right fucking mind would ever want to see that useless fucking fuck box ever fucking again?

This is what using this damned OS is doing to me” I’m starting to channel one of my old drill sergeants. I search around for some random private to drop and give me fifty, when a calm overcomes me.

They have got to be doing this shit on purpose. There is no way anything could be this fucked up on accident.

I search around for some proof. And it doesn’t take me long.

First some background. On the Mac and Windows, menus have been standard since the mid-’80s: File, Edit, (other options), Window, Help. All applications (save a few designed by genuine dip-shits) on both Windows and the Mac have stuck to this well-worn design.

It started with MS Office.

Some freaking genius decided to do away with menus altogether, and replace them with these tabby-ribbony-tool bar things figuring that replacing clear and easy-to-understand text menus with hieroglyphics would increase usability.

That’s so dog-damned stupid I’m not even going to debate that shit. Just tell me this Einstein, where’s the freaking file menu? 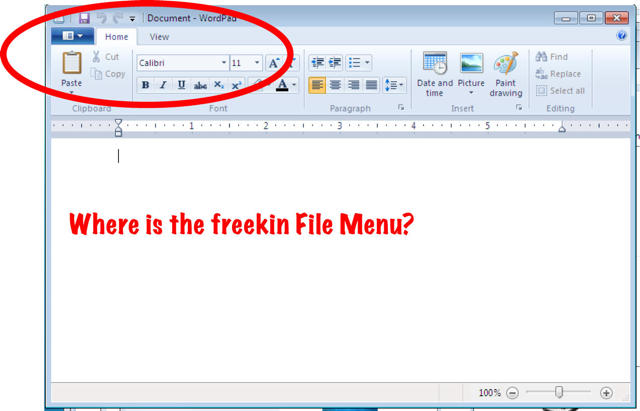 It ain’t there. Someone in Redmond is clearly and purposely trying to sabotage Microsoft from within because there is no way someone with less than malicious intent decided to replace the file menu with this: 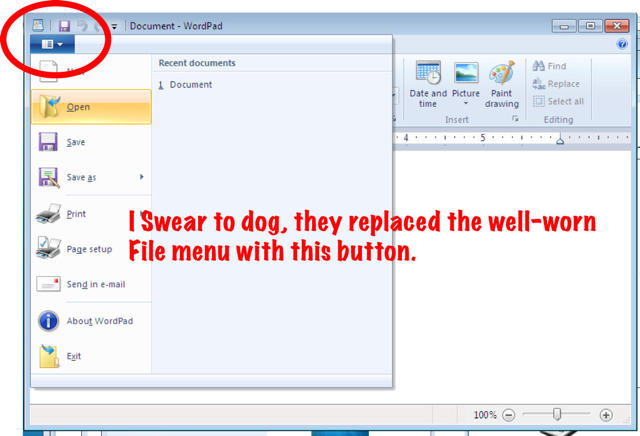 IN SUMMARY
If you have to use Windows for work — I’m sorry. I’ve only used it for the past few hours and already I’m ready for another go with the bleach. Of course if you do use it regularly, you’re probably somewhat immune to Window’s goofiness, just as torture victims are eventually able to tune out the pain.

What I don’t understand is how this Windows 7 is anything more than Vista SP2. It doesn’t seem any different to me. Perhaps it’s Microsoft’s version of Snow Leopard, except you can’t use your video card as an extra processor. It certainly isn’t the challenger to OS X they argue it will be.

That’s not to say that Windows 7 is all bad. It is faster. And it seemed stable as a rock for the time I used it. There is at least one new feature I thought was kinda cool. When you hover over an icon in their task bar (think doc menu), a popup shows you all the open documents for that application.

That’s a pretty cool feature and one we should steal. After all, they’ve stolen enough ideas from us over the years.

104 responses to “CoM’s Totally Unbiased Review of Windows 7: Debasing Myself So You Don’t Have To”