It’s been rumored that Apple will eventually introduce Near Fields Communications technology in an upcoming iPhone model, but speculation that such a technology will be implemented this year has been all but debunked.

If you’re itching for the ability to have NFC-like “wave and pay” capabilities on your iPhone 4, then it’s your lucky day. A simple hack has been discovered that turns your iPhone 4 into a NFC-capable device.

Smartphones like the Nexus S have NFC built-in, which enables the user to perform electronic cash transfers in the real world. More banks are beginning to support this new technology, and many banks will give customers a card for their account with implemented NFC technology. With NFC, you can quickly swipe and pay without the need to enter your PIN or signature. NFC payments are typically made for purchases under $20 to avoid the need for authentication. 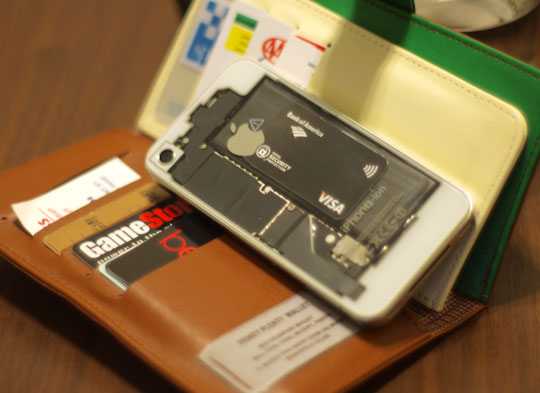 Unplggd has figured out an easy way to let the iPhone 4 make NFC payments. All you need is a NFC-enabled card from your bank or credit company. These are typically called “Smart Cards” or “Tap and Pay” cards, and they have become pretty common.

The trick involves opening the back of the iPhone 4 and positioning the card between the battery and back casing. The card should be thin enough to let you close the iPhone 4 again without bulging or damaging its internals. To learn how to take the iPhone 4’s back off, we recommend following iFixit’s thorough tutorial.

We’re a little hesitant to open the iPhone and place anything right on the device’s battery, but nevertheless this is still a very cool hack.

Let us know if you try to equip your iPhone 4 with NFC tech. Did it work for you?