Apple has finally bought the two domain names “iPhone4.com” and “WhiteiPhone.com.” It’s difficult to keep track of all the domains Apple actually owns (remember iCloud?), but it seems as though the company has finally ponied up the cash for two already-released products.

We’re not really sure why Apple is just now acquiring a domain for the iPhone 4 and white iPhone, but hey, it’s never too late. 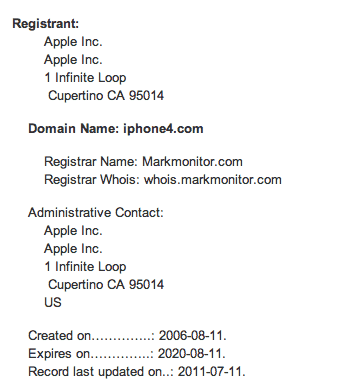 This acquisition was spotted by Fusible. The amount that Apple payed for the two domains was not disclosed, but we’re sure it wasn’t your typical $15.00/year .com purchase.

Both domains forward to Apple’s iPhone 4 product page at the moment. Apple most likely bought these two domains for good measure. We’re not going to read too much into these acquisitions.

A recent study shows that over 30% of iPhone 4 users think they’re already using 4G data speeds, due to the device’s misleading number scheme. Apple does not own iPhone4G.com, either.

Why do you think Apple is just now buying these two domains?