All My Files takes some getting used to. It’s a new view in the Finder that gathers all your files in a single window — no matter where they are — which you can then arrange as you would any other “Finder” window: by Application, Kind, Size, Date Created, Date Opened, Date Modified, Label and so on.

It’s handy… if you can train yourself to use it. So instead of digging in the Documents folder for the report you just wrote, it’s right there at the top of All My Files, Arrange By Date. You just have to remember to look there first, which we keep forgetting to do.

So far, this hasn’t been an indispensable tool to us. However, if you’re constantly saving files and then forgetting where you put them, this is an easier interface for finding them than Spotlight. 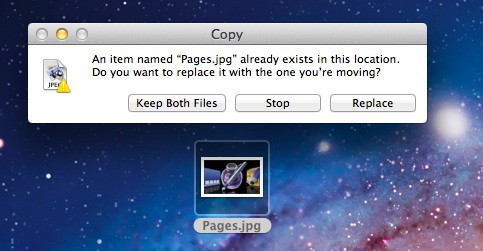 One of the things that drives PC switchers batty is the way the Finder handles files and folders. we’ve seen numerous complaints that OS X overwrote a file or folder during a copy operation when PC switchers expected them to be merged. Lion fixes that. The Finder now offers to merge two folders with the same name into a single folder. Same with files. The Finder now offers to keep both files, adding the word “copy” to the new file.

Honestly, this is the way it should always have been done. An operating system shouldn’t be irretrievably and invisibly discarding user data unless the user has chosen to delete something. We’re not sure what took so long — hubris, perhaps? — but we’re glad that Merging Folders has finally been fixed. 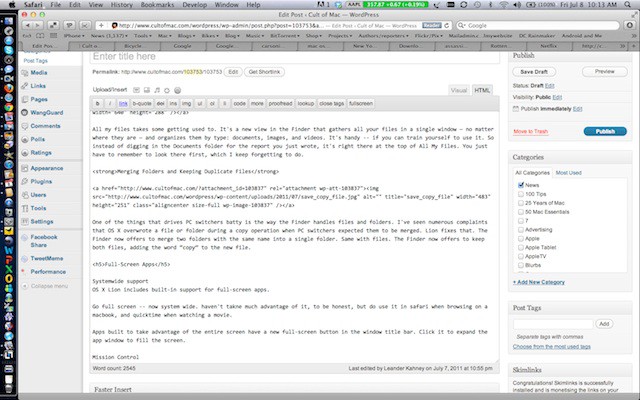 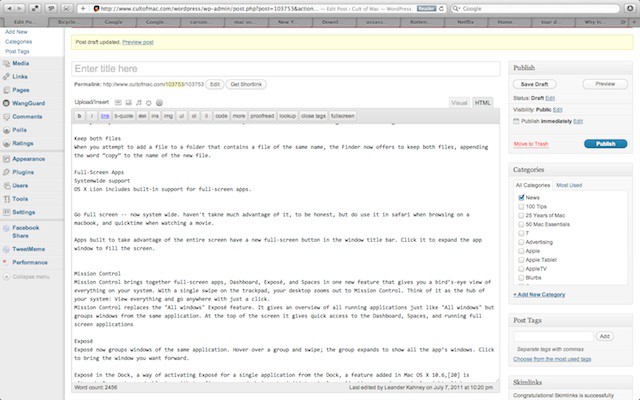 Fullscreen apps aren’t new to OS X — QuickTime has it had for a while, and it’s great for watching movies. But previously, fullscreen needed to be programmed in. Now fullscreen has system-level support, available to any app that needs it.

For the end user, this probably won’t make much difference. Why? Because most of the apps you wanted to use full screen under Snow Leopard already had the functionality programmed in. Sure, zooming into full screen in, say, Quicktime or Chrome will be prettier in Lion — there’s fresh animations for it, and they look good — but ultimately, all Apple’s done is make it easier for developers to put fullscreen support in their apps, not make every app appropriate fullscreen.

Even when fullscreen is present, it’s not really a huge boon for a lot of apps. Above is a Safari window before and after full screen. As you can see, there’s not much difference.

Ultimately, Lion’s fullscreen capabilities will probably go over best with the easily distracted. Fans of distraction-free productivity apps should love Lion. The rest of us will probably use the fullscreen functionality sparingly at best. 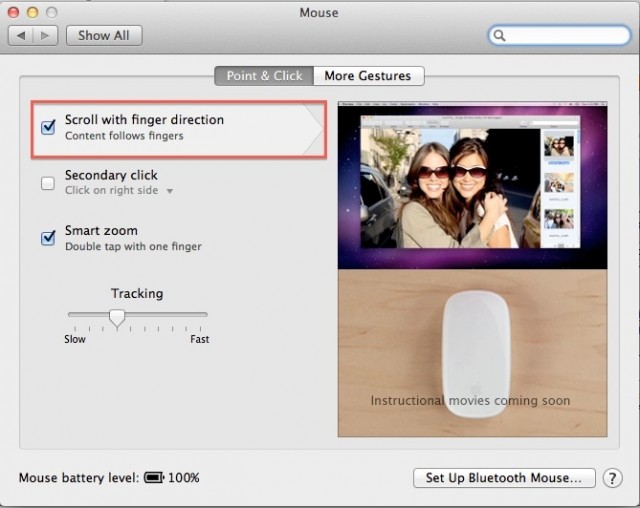 Another big change: Touchpad scrolling is reversed in OS X Lion. Instead of pulling your fingers down to scroll down a window, you now push your fingers up.

Confused? You will be. It undoes years of muscle memory. So why would Apple do this? It’s because of iOS. It’s the same gesture you make on the iPhone or iPad when you scroll up and down the screen. You want to scroll down? You pull the content up.

It’s another example of the influence of iOS on OS X. We don’t think it’s evidence of a touchscreen iMac. Rather it makes scrolling consistent across Apple’s devices. For anyone buying a Mac because they fell in love with an iPhone, backwards scrolling will be instantly familiar.

Not only is reverse scrolling more consistent, it’s also the more natural way of scrolling using multitouch. As we’ve previously explained, if you remember that a computer desktop is actually a GUI metaphor for a physical desktop, and virtual objects are meant to manipulated using the same physics as real objects, it becomes clear that OS X Lion’s so-called “reverse scrolling” is anything but. It’s actually realistic scrolling.

We think it’s a great move and typical of Apple — thanks to the iPhone and iPad, this mode of scrolling is the future, get used to it! (Luddites can restore the previous scroll direction by deselecting the “direction of finger movement” option in preferences for the mouse or trackpad in System Preferences.) 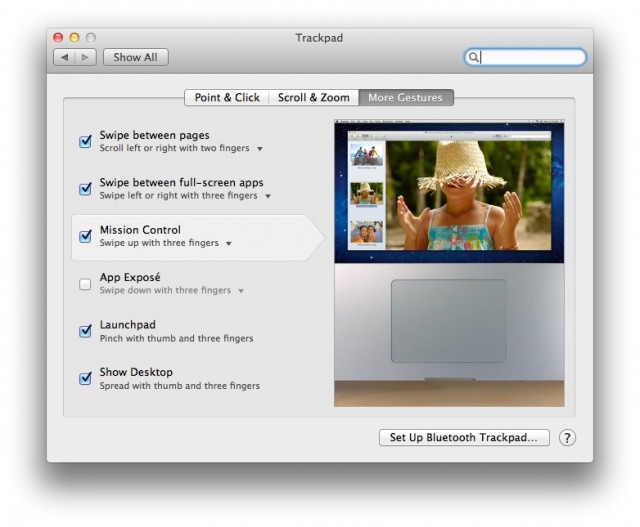 We’re ambivalent on many of the new multitouch gestures.

For the most part, they correspond to the new features like Mission Control and Launchpad. Mission Control’s triggered by swiping up with three fingers by default, which is pretty easy… but still not easier than hitting my MacBook Air’s F3 key, which does the same thing. We have a similar issue with the Show Desktop gesture: why do this when you have a hardware key?

Launchpad, on the other hand, is triggered with a pinch with the thumb and three fingers. That’s fine, but as we’ve previously said, we don’t see a lot of use in Launchpad, so the multitouch gesture’s not exactly all that helpful. Additionally, Launchpad is the most newbie friendly interface for opening apps in Lion… so why does it use one of the most convoluted gesture by default?

Actually, while Lion’s multitouch gestures for interacting with text, images and specific apps work as well or better as they do in Snow Leopard, we don’t think a lot of the navigational gestures. They’re often slow to trigger or made redundant by dedicated keys. Your mileage may well vary.

For some strange reason, it’s never been easy in OS X to see how much space on your hard drive you had left. No longer. Lion adds a graphic to “About This Mac” showing the types and sizes of files on your drive. It basically looks exactly like the graphic breakdown of what is taking up your iPod or iPhone’s storage, breaking files down into their type: photos, apps, documents, music, video and so on. It’s a great overview of what the problem areas on your Mac’s overstuffed hard drive are.

Other key info is much easier to see in an at-a-glance view: RAM configuration, your Mac’s serial number, your display settings and resolution, etc. The “About This Mac” overhaul was probably done mostly for Apple Store Geniuses benefit, but it’s very nicely handled.