It isn’t a secret that Apple is killing support for Rosetta in OS X Lion 10.7 the first version of OS X that won’t support the PowerPC platform and apps designed to run on it.  All applications requiring Rosetta support turn into “tombstones”  that can no longer be executed after upgrading to OS X Lion. Here’s what they look like and information on what to do about it.

One of the first things you might see after upgrading to OS X Lion are white circles with a slash across them superimposed over some of your application icons. I call those “tombstones” because those applications are the ones that require Rosetta in order to run. Therefore since OS X Lion doesn’t support Rosetta you can no longer use these applications on your Mac. OS X Lion has effectively killed them, but a “tombstone” icon remains to point them out.

The icon image for the Rosetta version of Geekbench above is one example, but we found a few others as you can see below — Epson Scan, a Traceroute application, and a GPS utility no longer work. So the question is what can you do about it?

What Kind Of Application Is It?

The most important thing to check first about an application is ask yourself, “What kind of application is it? ” These are the three types to be concerned about: PowerPC, Universal, and Intel.

The first one PowerPC requires Rosetta and will not run on OS X Lion. The other two Universal and Intel are okay since these are compatible with OS X Lion. If you are using an Intel based Mac than Intel is the best option. The Universal type includes Intel and PowerPC support, but the latter can make the application bloated and the redundant PowerPC version of the application on your Mac is just wasting disk space.

You can manually check each of your applications by clicking on its icon once to select it and pressing CMD+I. You’ll see a window open in Finder like this one below. Expand the General section if needed and look for “Kind.” 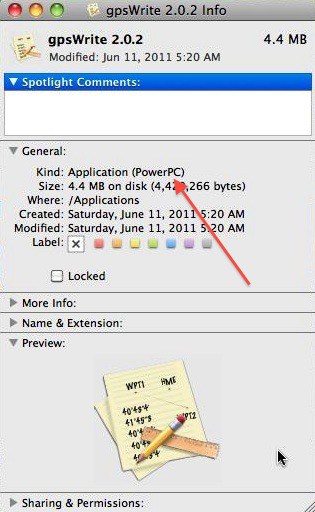 The gpsWrite applications is PowerPC only and therefore it will not work on OS X Lion. Once OS X Lion was installed the icon for gpsWrite was turned into a “tombstone” as you can see in the Finder window above.

So What Do You Do Next?

You can also check out this website for information about application compatibility with OS X Lion: RoaringApps Crowd Sourced App Compatibility Database For OS X Lion. Join the site and add your own knowledge and experience to help out other Mac users.

If you are an advanced user and familiar with the Unix shell on your Mac open Terminal and enter the following command:

it will create a text file on your Desktop that will contain information about all the applications installed on your Mac. Open the document called MyFileTypes.txt in your favorite text editor and search for the word “PowerPC” each one of these will require Rosetta support in order to execute. Here’s the sample output for my gpsWrite application:

Updated 07/09/11 at 8:33 PM PDT: Commenter lwdesign1 recommends another way to check for PowerPC applications: “One note about a MUCH QUICKER way of sorting out which apps are PowerPC: Launch System Profiler (it’s in the Utilities folder in your Applications folder), then click on Software. It may take a minute or so to check through your apps, then will display a list of them, their version and whether they’re PowerPC, Universal or Intel. This is MUCH faster than laboriously clicking on each app then hitting command-I.”

Don’t upgrade. If you really need that PowerPC application don’t upgrade to OS X Lion keep Snow Leopard around until you can find an alternative application to use.

Apple has offered Rosetta and PowerPC support on Intel architecture machines for over five years (PowerPC to Intel architecture changes were announced in 2005 at WWDC) allowing users to keep running PowerPC applications from roughly 2005 to present. It’s definitely time to let that go as far as Apple is concerned and OS X Lion hammers that point home. Now it might be your turn to do the same. Personally I’ll lose a handful of applications on my Mac, but fortunately none of these are overly critical to me. I plan on upgrading all my Macs to OS X Lion and I’m not planning on looking back.

Do you have any PowerPC applications that you cannot live without? Tell us about them by leaving a comment.