| Cult of Mac
Cult of Mac Mobile menu toggle
Mobile menu toggle
FULLSCREEN
This is a speaker dock fit for the most holy of El Jobso's divine creations. Its gaudy decorations were handcrafted by George Dinkel, a Bavarian photographer who used golden-colored polymer clay for his creation, which houses a Dolby 2.1 sound system.
From Italian designers Enrico Bosa and Isabella Lovero, the Megaphone is one of the most magnificent iPhone accessories we've ever seen. Each Megaphone is crafted by hand out of ceramic and placed on a thin wooden frame that also plays an important role in sound amplification. The standard version costs $500, but your gold iPhone 5s demands to be paired with the $800 gold version.
Old clanging alarm clocks are practically extinct. But if your bedroom needs a nostalgic vibe, Edifier's Tick Tock Dock will recharge your iPhone while you snooze and blast you awake in the morning with its pair of 360-degree omnidirectional speakers.
Hammacher Schlemmer has been peddling eye-catching gadgets for more than a century, and the company's Futurist iPhone speaker is suitably intriguing. Not only does it pack two tweeters and a 12-watt subwoofer, the IR sensors on both sides detect hand movements that can control your music.
Philips pushed the limits of what should be considered an iPhone dock with its FWP3200D. The twin-DJing iPhone setup packs a pair of 5.25-inch subwoofers that pulse and glow while spitting out beats from the scratchable mix-stand.
Artist Christopher Locke makes his Analog Tele-Phonographer speakers from old trumpets and various machine parts. They don’t use electricity, relying instead on the instrument's brass bell to magnify the sound from an iPhone’s built-in speakers. Priced at $400, they look good and sound great.
Not happy with your dock's tiny speaker? Behringer can solve all your problems with the biggest, baddest iPhone speaker dock this side of Mount Olympus. The iNuke Boom is a 700-pound monster speaker system measuring 8 feet wide and 4 feet tall. It can crank out up to 10,000 watts of sound (and it will only set you back $30,000).
Built for for iPhone and iPad, the Gramophone isn’t the first horn-speaker dock we've seen, but it might be the most beautiful. The speakers, which run from $200 to $300 depending on size, are fashioned from wood and metal and will boost the sound output of your device by 3 times.
If Ikea ever makes an iPhone dock, it'll look like this. The Horizontal 51 soundboard is a shelf and docking station in one. It carries integrated speakers plus extra connections for TV, PCs or an MP3 player. You could even put your iMac on it, since the shelf can support up to 55 pounds.
Most of the speakers you buy will one day end up in a landfill. Not iBamboo. It's made of real bamboo to create an electricity-free amplifier that will add some power to your music without destroying the planet.
Just in case his Sound Shrine is a bit too flashy for your taste, Bavarian photographer George Dinkle also created the iReliquary - an iPhone sanctuary fit for a king. It will protect your gold iPhone 5s from the satanic forces of decay for centuries if you'll let it.
Peter Morris rejuvenated an old Atari 2600 by turning it into an iPhone speaker dock, replete with six equalizer settings, an FM radio and a 3.5mm input jack. Perfect for playing soundtracks to your favorite 8-bit dreamscapes.
The iPhone is the most powerful thing you can drive that fits in your pocket, so why not add some hot-rod flair? That’s just what the iXoost does. Hand-built by Xoost in Italy, this speaker dock grafts some gorgeous aluminum exhaust pipes onto your iPhone.
You'll get a healthy dose of grade-school nostalgia with the iRecorder. The iPhone sits inside this plastic dock and hooks up via a jack. The buttons really do work, and there’s a pull-out handle for carrying it. Power comes from three AAA batteries or a Micro-USB port. 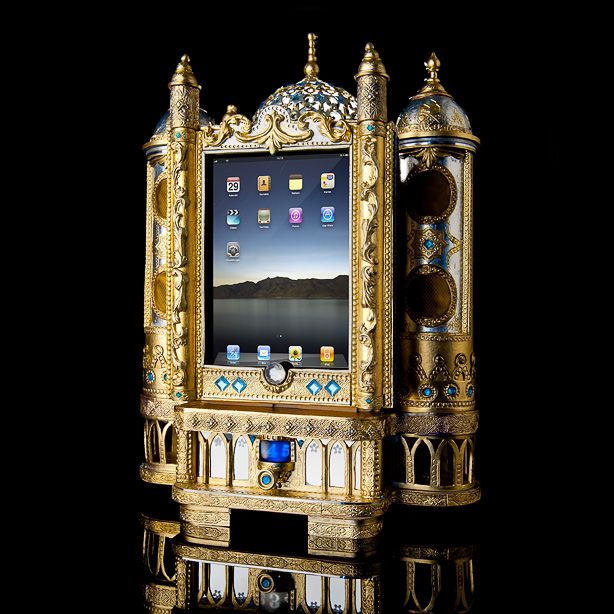 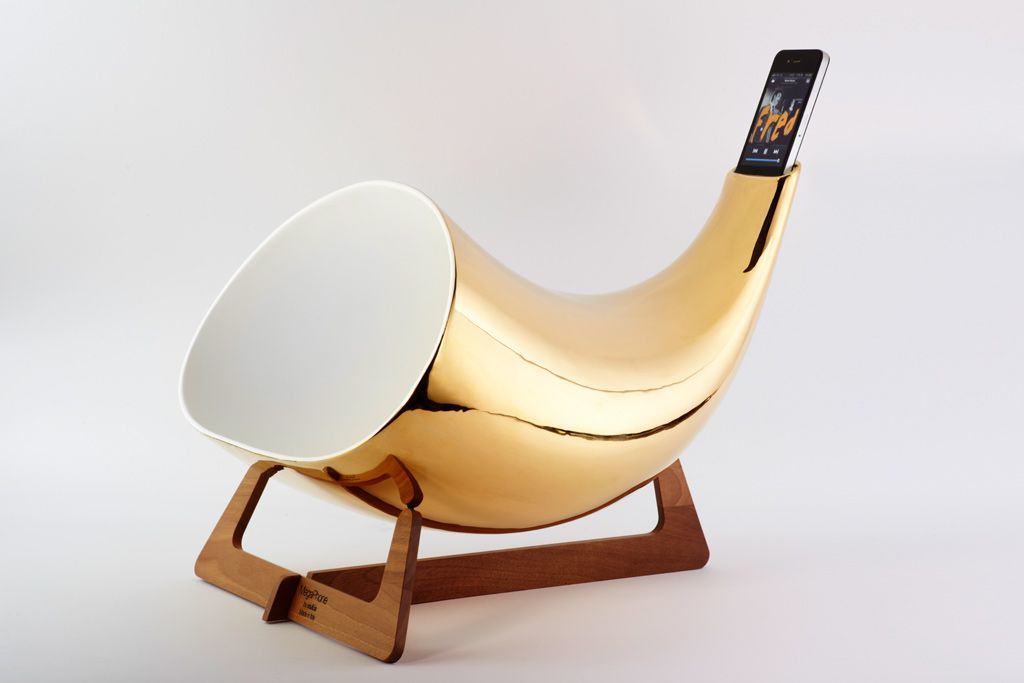 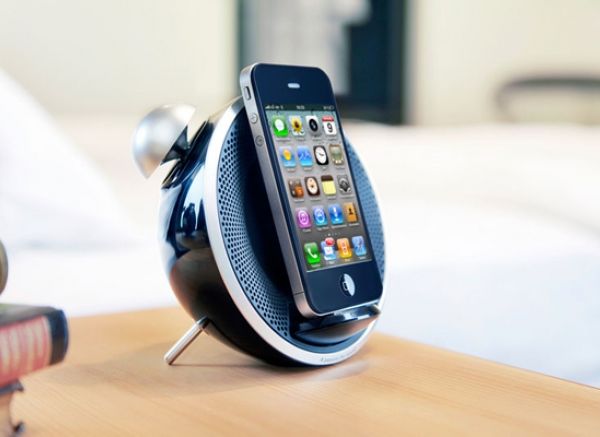 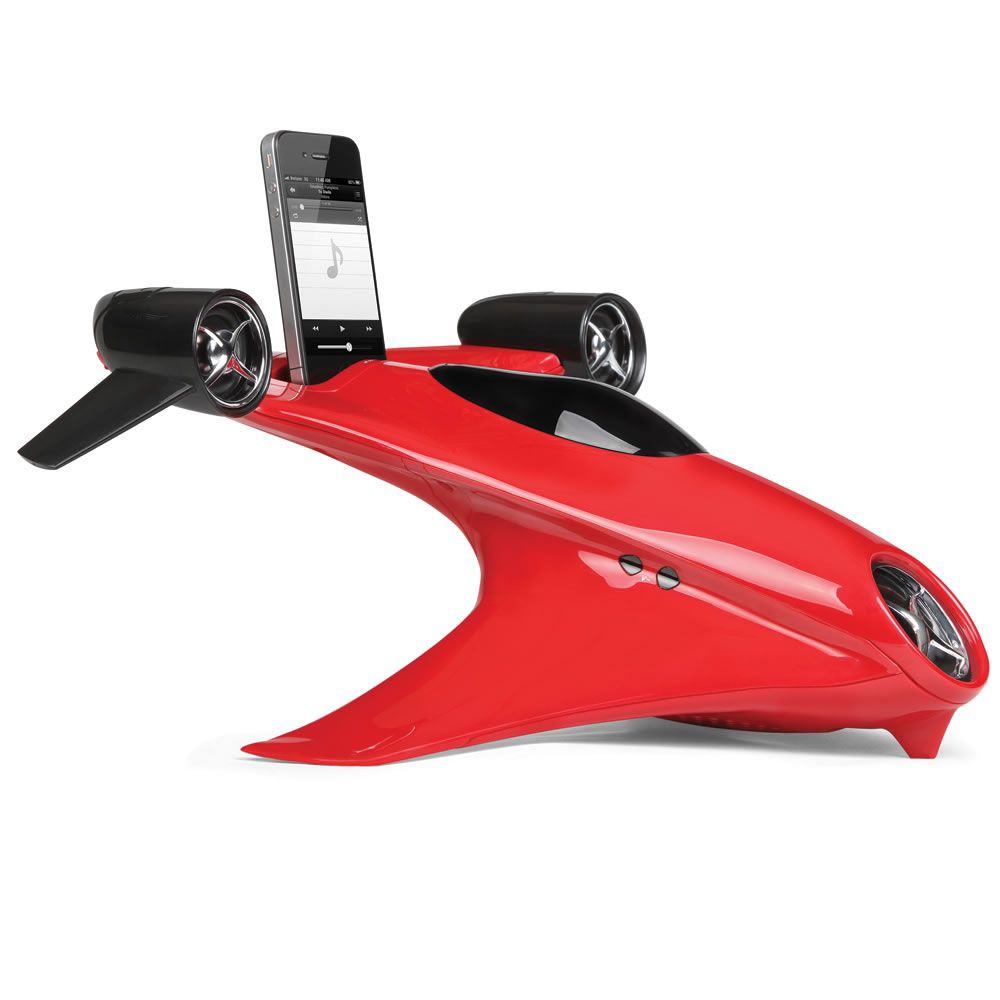 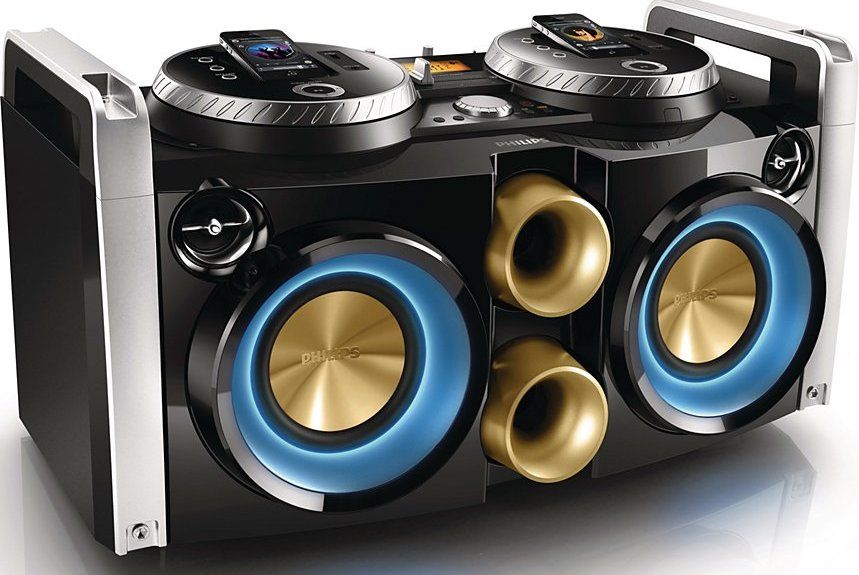 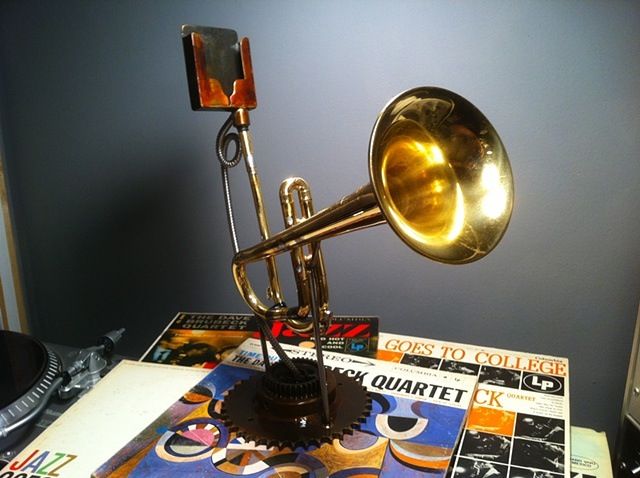 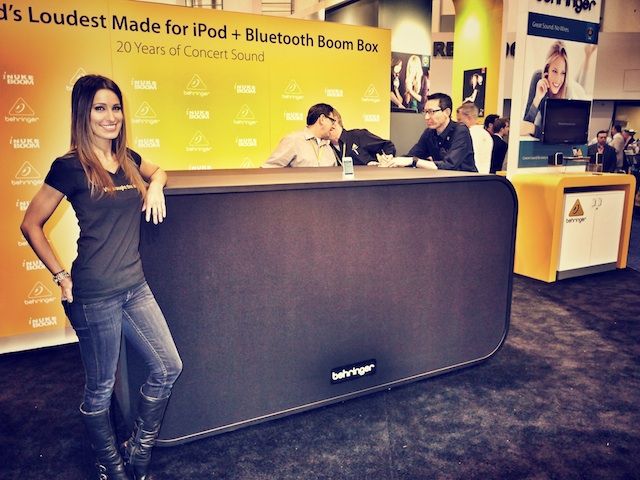 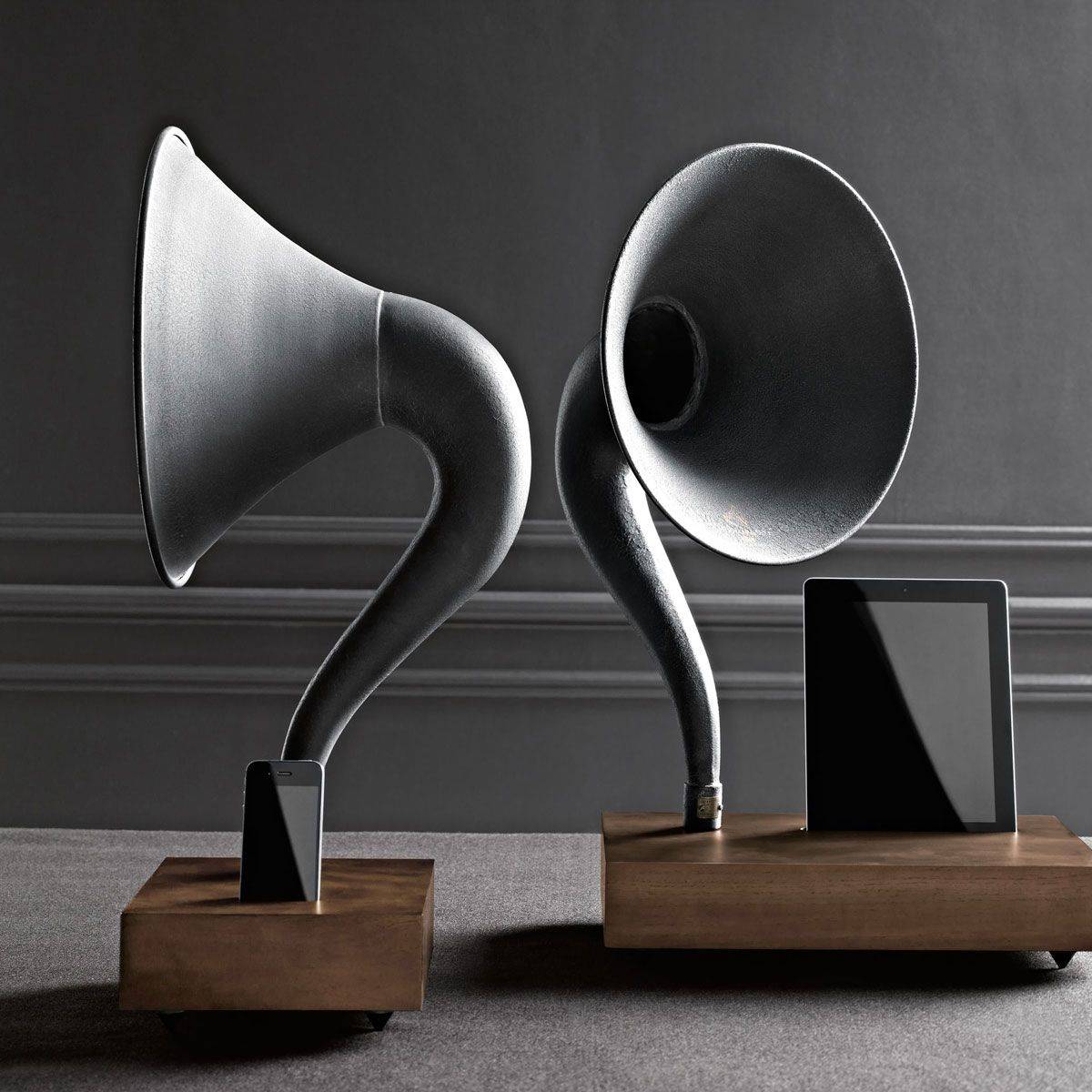 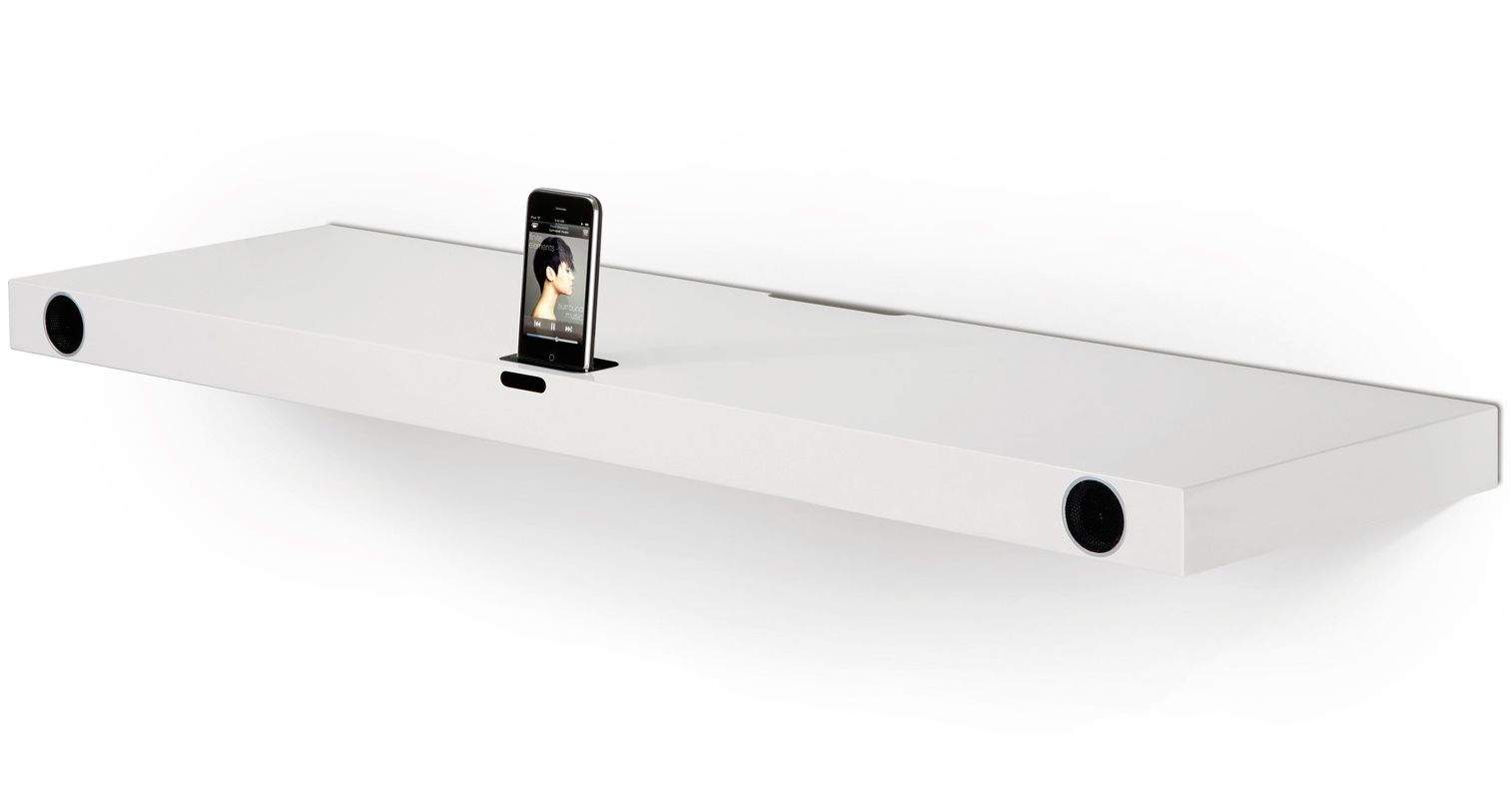 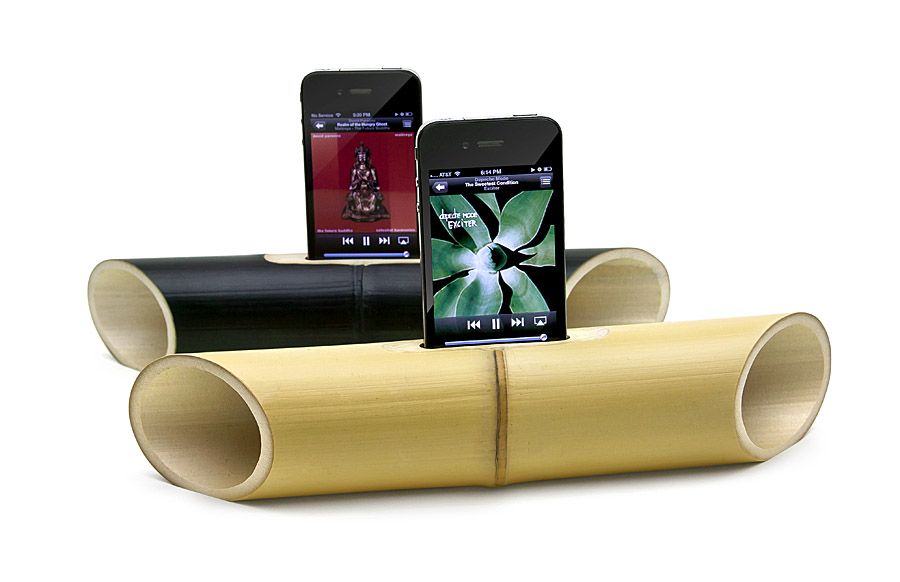 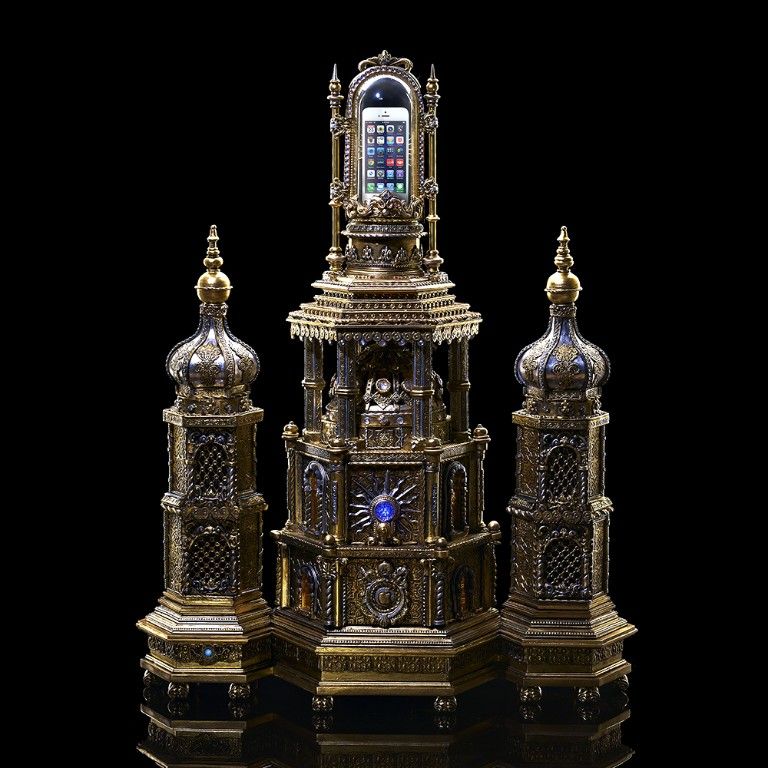 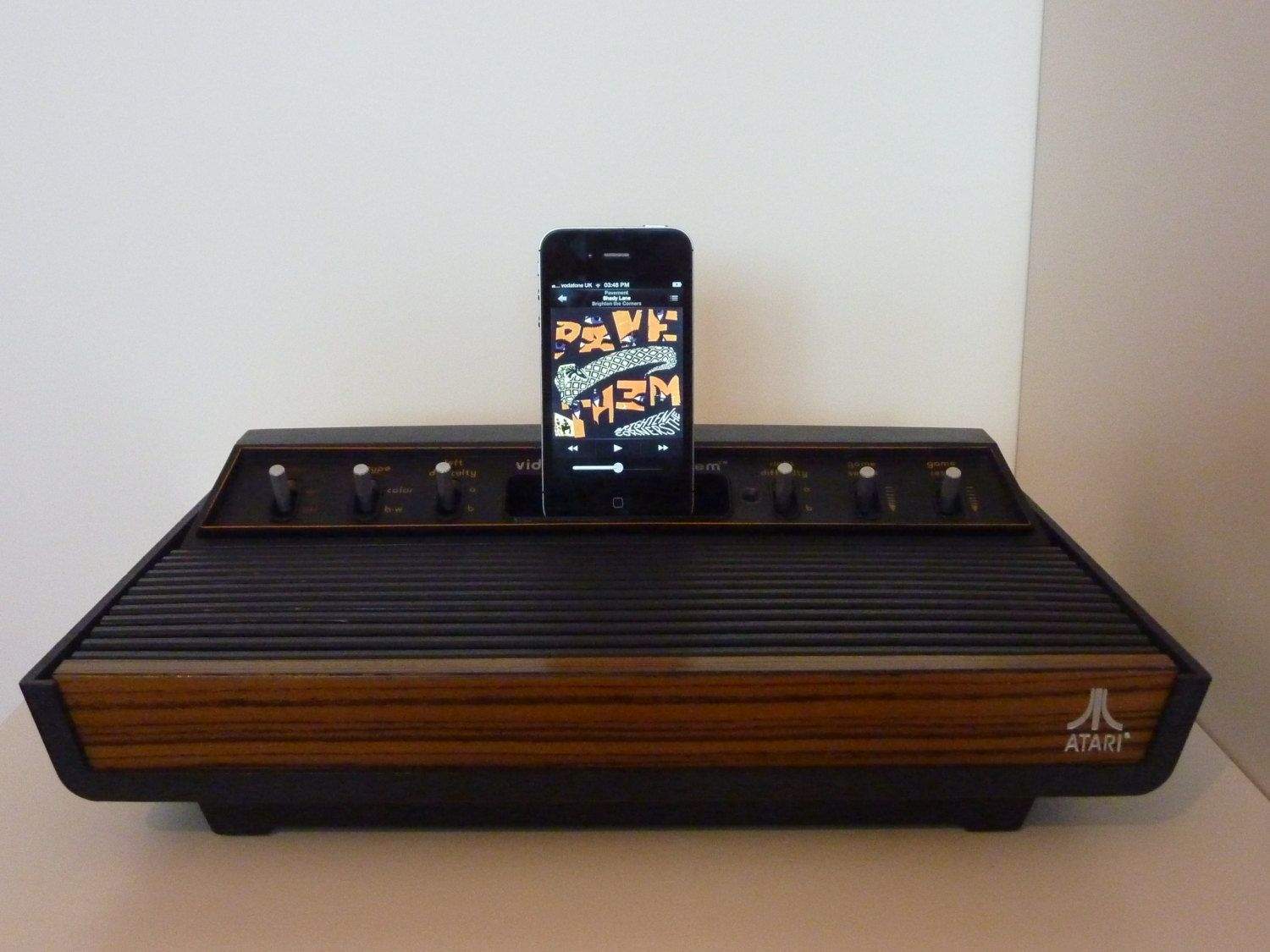 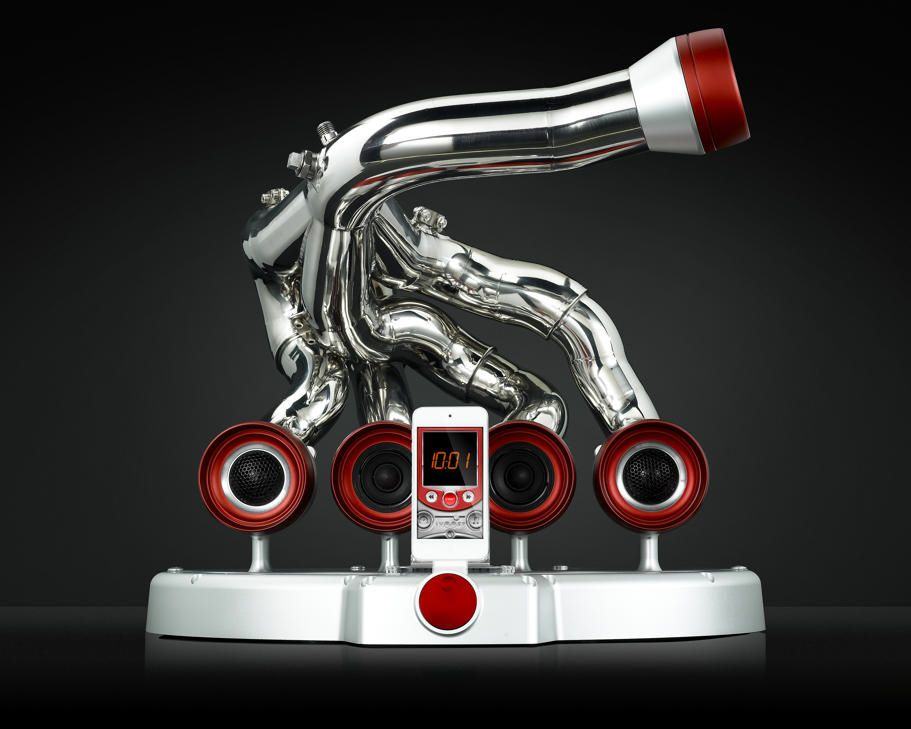 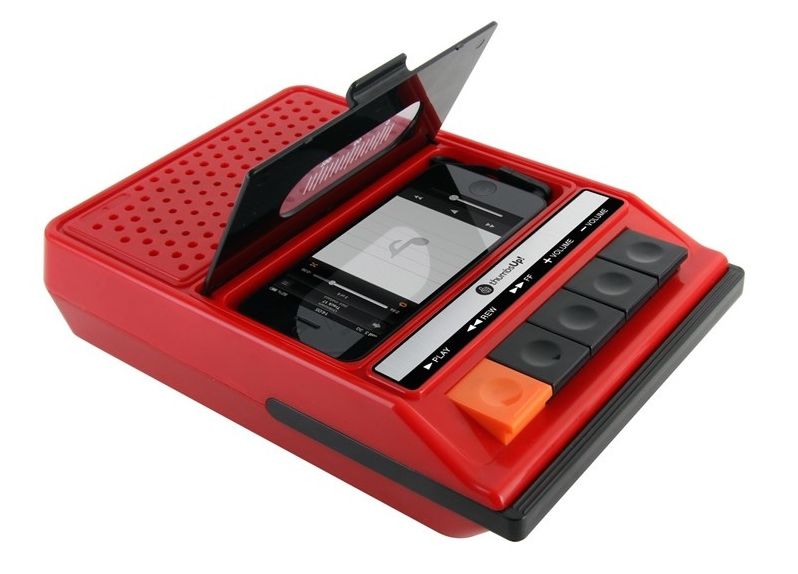 Your iPhone’s speakers suck. No amount of magical design from Jony Ive can change the laws of physics to give those itsy-bitsy tweeters earth-shattering bass, but plenty of acoustic iPhone docks are willing to try.

We’ve seen a menagerie of speaker docks over the years, and while most stick to being practical, we love the weird creations that make you do a double-take. We’ve gathered 14 of the most incredible iPhone docks you’ll ever see in the gallery above.

Got your own favorite bizarre dock for your iDevice? Let us know in the comments below.

Now here’s something else you don’t see every day: musician and entrepreneur Jean Michel Jarre has introduced the AeroDream One, an 11 foot tall technological marvel that combines an all-purpose iDevice dock and a 10,000W stereo system for the ultimate in colossal home entertainment.

END_OF_DOCUMENT_TOKEN_TO_BE_REPLACED

It’s portable, easy to use, and the picture and sound quality are OK. It has big, easy-to-use buttons that are great for kids. It’s not for the living room, but it does do a ton of things, which makes it good for a kids’ room or RV.

END_OF_DOCUMENT_TOKEN_TO_BE_REPLACED

Homade’s Boom Dock is a decidedly goofy tribute to the days when a portable music player was a huge tape deck turned up to 11 carried on a shoulder and crammed right up against your ear drum. It’s unpowered, so the sound is lousy, but it’s yours for just $25… the perfect accessory for a Lilliputian electric boogaloo.

Generally speaking, the only type of pies worth bothering with in the United Kingdoms are delicious savory ones, but if you’re jonesing for a pepperoni pizza while on a trip to olde Albion, you now have extra incentive to stop into a Pizza Express location: iPod docks built right into the seats.

END_OF_DOCUMENT_TOKEN_TO_BE_REPLACED

If you’ve spent any time around wee ones lately,  you know toy manufacturers seem to be challenging each other to see who can devise the most annoying, ear-wormy tinny electronic jingle to fart out whenever your kid interacts with it in some way.

Hail the Combi Bouncer, the killer app for baby bouncers. You can plug in the music from your iPod and a vibration unit driven by the music sends them into cooing cuteness or sleep faster. Sound controls are on the back,  so the baby is not disturbed when you turn down the “Cradle Song.”

It can hold babies up to 25 lbs and comes with a removable collapsible canopy, toy bar with wooden toys and an adjustable hammock-style seat design.

This isn’t your gran’s sideboard: a sleek, minimalist iBoard provides a dock for your iPod or iPhone, functioning as a de facto stereo with a sound range of up to 100 meters.

From Swiss company Schubinger Möbel, the iBoard (plexiglass case not included, though if you want to keep sticky mitts off the device, it’s not a horrible idea) sends 2.4 GHz radio signal to a loudspeaker system that can handle a full audio range including an 8-inch subwoofer and four loudspeakers, and a 100-watt digital amplifier for  quality sound.

In 2007, British student Meredith Kercher was murdered in Italy, during a study abroad program in hill town Perugia.

About a year later, Rudy Guede was sentenced to 30 years for his part in the killing, for which Kercher’s roommate, American student Amanda “Foxy Knoxy” Knox and her boyfriend, Italian IT grad, Raffaele Sollecito, are still awaiting trial.

Guede’s appeal now before the Italian court hinges on an iPod.

During what has been hypothesized was some sort of late-night Halloween sex game where the 21-year-old Kercher was an unwilling participant, Guede maintains he was in the bathroom of the young women’s apartment.

While she was being killed with a knife, he was listening to music on iCarta, a toilet paper holder roll that doubles as an iPod dock.

Guede’s lawyers tried to head off what they thought might be viewed as a sort of Twinkie defense for the digital age in a statement to Italian media (below translation mine):

“It is nothing more than a confirmation of how some abnormal behaviors are apparently normal among young people today,” said laywers Valter Biscotti and Nicodemo Gentile. “Just as Facebook is their virtual world, they now listen to music everywhere, even in the bathroom. The marketing of such products implies a certain routine use.”

The statement was published today in Italian papers, without information on how the legal team might use or prove the bathroom listening alibi.