Can an iPad really replace a “proper” computer? Can a ten-inch, 128GB tablet do the work of an eleven-inch 128GB MacBook Air? The answer is yes. Kinda. If your work involves having two windows sitting permanently open side-by-side, then the iPad might not be for you (although you might consider whether you need both windows open together).

For most other regular workaday work type work, though. the iPad is ideal. And here’s our guide to replacing your Mac with an iPad. Specifically a Retina iPad, but you might even manage with a mini.

Software is the most important part of the setup. You can add keyboards and even an external display, but if the software doesn’t cut it, you won’t be getting paid. With that in mind, here’s a look at iPad apps which will replace your desktop software.

Although obviously iWork works on the iPad, in our view, there’s really only one choice: Quickoffice.

There are plenty of Microsoft Office-compatible apps for the iPad, but I choose QuickOffice. It’s not as slick as Apple’s Numbers and Pages, but it is way more compatible with Microsoft’s suite. If somebody sends you a Word doc and you edit it in Pages, not even the fonts will stay the same. Use QuickOffice and you can track changes, add comments and work away and all of your edits will make it back to your colleagues next time they open the document on their Windows PC (the idiots).

Better still, Quickoffice will use your Google Drive for storage (and Google Apps customers get a free copy), and let you view and edit many different file types, not just Word .DOC files.

The iPad’s app-centric document model (the files are in the apps) is fine, but let’s not kid ourselves — we need to open our files in various places, and we need to know where they are. Dropbox is the clear choice, as it works with pretty much every platform there is, but another app — CloudMagic — does even more. 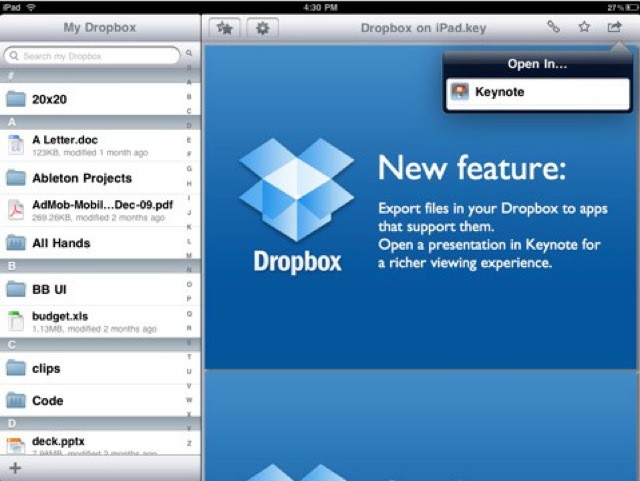 Dropbox integrates with so many apps that you probably don’t even need the actual Dropbox application. That would be a shame though, as it not only acts like the de-facto file system for you iPad, it also lets you search your whole Dropbox, browse your photos (and upload them automatically) and open your files just about anywhere. It’s also fast, clean-looking and free.

CloudMagic is a cloud app which indexes everything you own. It works with your Dropbox, your Gmail, Evernote, Exchange, Calendars, Facebook, Twitter… and more. And it searches across all of them instantly, and inside your files and messages.

It is, in effect, Spotlight for all your cloud services, only it actually works. It’s also free, although there are paid plans if you want extra features.

The built-in Photos app is fine for quick fixes and crops, and there are any number of filtering apps to make your pictures look like you didn’t know how to use a film camera. But for heavier edits, try Photoforge 2.

Photoforge will let you make all the edits you need. You can use preset filters, or go manual with channel mixers, RGB/CMYK adjustments, noise reduction, levels, curves and so on. You can also work with layers, and Photoforge has something even the iOS version of Photoshop doesn’t — proper B&W color channel mixing. If you want to do desktop-quality B&W conversions of your photos, this is the place to do it.

How To Zip Files

For opening and compressing files, my favorite iPad app is Archives. It’s based on the same engine as the excellent iUnarchive for OS X, and it’s cheap. Next time Safari asks where you want to open a ZIP archive, choose Archives. You can even preview the contents of the archives before opening them.

Even with a proper physical keyboard, you’re going to want to buy Textexpander Touch. At it’s simplest it will expand a small typed snippet into a bigger chunk of text: I can type “msg” to get my Gmail address, for example. iOS6 has a limited version of this built in, but TextExpander does a lot more. For a start, it’ll use formatting, so you can type your mailing address with a few keystrokes. And it will do other tricks, like including the clipboard in a snippet, or placing the cursor in the right spot so you can keep typing, or even adding the date just by typing “ddate” (you can change this built-in snippet).

The app’s library works with most iOS text editors, and it will sync with the Mac version via Dropbox.

Photosync is just about the best way to move photos between your devices. Fire it up on your iPad and iPhone, and you can just tap the images you want to send and choose a destination (you can even choose a default destination for one-tap sharing).

The images will quickly (and reliably) get beamed across the network and — if there is no network — automatically via Bluetooth. Incoming pictures are saved direct to your camera roll, and you can also grab a free Mac utility to send and receive them on the desktop. I use it every day. Oh, and unlike the otherwise excellent Photo Stream, all photos are sent at full resolution.

Need a calculator? Need to make a tiny spreadsheet, but don’t want to get involved with Numbers? Want to do a quick currency conversion or make a budget sheet? Then Soulver is for you. It’s a calculator mixed with a text editor. Type in your numbers and it will magically solve equations for you.

You can make multi-line calculations, and include variables and constants. It’ll even keep its currency rates up to date for you.

Soulver will sync with other versions of itself (on both iOS and Mac) via Dropbox, and it is currently in the middle of adding iCloud support.

Some offices still use IM. If you work in one, you’ll need a client that works with whatever IM protocols you use, and there are two main contenders: IM+ and Beejive IM. Both offer push, both work with pretty much every service out there, including Jabber. And both can keep working in the background, only interrupting you when there’s a new message.

To be honest, which one you choose comes down to personal choice. I have bought both, but Beejive is the one I still have on my iPad simply because it is less ugly to look at, and (supposedly) works with our Jabber-based HipChat chatroom.

You have the apps (likely for a combined cost of less than a single seat of MS Office for OS X). What about hardware? In theory, you can do everything just with the iPad’s own screen, but a few peripherals will make life a little easier. And they’ll also convince your colleagues that you’re working, and not just goofing off.

Yes, you can opt for a combined keyboard and case, but then you need another iPad case for when you’re not taking the keyboard with you. Plus, the whole point of using a hardware keyboard is to get away from the iPad’s cramped touch-screen keyboard. So, you should go full size.

Do your wrists a favor and buy yourself a full-sized keyboard.

Apple’s own wireless keyboard works great. It has controls for sound, music and brightness, and it runs for months on a pair of AA batteries. Combine it with the light but tough Origami case, which unfolds to make a stand for the iPad, and you have a mobile office in one tiny package.

And yes, I have weighed them:

Sometimes, I use my Apple keyboard and iPad on a desk. Using a separate stand lets you get a little extra breathing space between the two, and the PadPivot is my favorite stand. You can adjust the tilt; you can fold it up and carry it in a pocket; it’s sturdy; it can double as a movie-watching stand and it’ll stop the iPad slipping off your lap. Buy one.

Handy To Have Hardware

If you want to use your iPad to edit and organize photos from a camera (or from your iPhone) then you can slurp them in through the camera connection kit. But there’s also a USB connector (the old 30-pin dock connector-based kit contained both — Lighting iPad owners will need to buy it separately) which will let you connect a keyboard, a USB microphone, or even a powered USB hard drive (although only to read photos and videos, and only if they’re in a root-level folder called DCIM).

Still, it’s pretty handy to have around.

You should buy a speaker. The Jambox is a great choice, but there are others, like the Braven 650 which will do the same thing. The Jambox is great for watching movies, but it’s also a nice way to listen to soothing music while you work. And don’t forget, that music can be controlled right from that BT keyboard you’re using.

Far from essential, but if you like to watch TV, you can do it direct on your iPad with one of Elgato’s TV boxes. If you still have a Mac around, you can use a USB tuner dongle over there and just beam the results to Elgato’s iPad app. Or you can get a versions which plugs into the iPad’s dock connector. Or there’s a gadget which can hook up to both your cable box and your router (via Ethernet) and beam the results to any machine in the house over your Wi-Fi network. Prices vary, but Elgato’s gear is rock solid, and sometimes, even with NetFlix and iTunes, you just want to kick back and see what’s on TV.

Even 128GB isn’t much if you watch a lot of movies, or have a big photo library. There are more and more storage options coming out every month, but they all do something similar to Seagate’s Satellite. This battery-powered hard drive creates a Wi-Fi network to which you connect your iPad. Using a companion app, you can access all 500GB of media stored thereon, streaming simultaneously to multiple devices (three is the norm, but it varies with other manufacturers’ products).

It’s not for everyone, sure, but it’s a great way to keep a ton of movies with you. Or you could just sign up for Netflix and Dropbox and do it that way. One note: there’s a hacking project which will turn your GoFlex drive into a WebDav server (for writing any kind of files from the iPad) and let it join an existing network, so you can stay connected to the internet when you use it.

By definition, the iPad does some things better than the desktop, and some things worse. You’ll have to assess the tradeoffs to see whether an iPad will work for you, but be sure to do it with an open mind. Many people are wedded to their Macs just because they’re used to them, not because they actually need all that they offer.

Try this: Pick something you use your computer for every day, and work out how to do it on your iPad instead. Even if it doesn’t work out for you, at least you will have some insight into exactly what that task involves: you win either way.