We’re all familiar with just how stringent Apple’s App Store approval process is, but the journey iOS apps take between submission to Apple and finally reaching the App Store is a mystery to most of us. However, one Facebook profile gives us a sneak peek into Apple’s testing lab.

Dive Apple, a female who lives in San Francisco and looks like an upside-down cat, is an App Store reviewer whose Facebook profile reveals a lot about unreleased iOS apps and life behind a desk in Cupertino.

It’s worth mentioning at this point that shortly after this profile was discovered by ReadWriteWeb, it was removed from Facebook. But you can take a look at a cached version of the page thanks to Bing. Its prompt removal only strengthens the believe that this profile did indeed belong to an Apple employee.

Dive lives in San Francisco, but she spends a fair amount of time a 45-minute drive south in Cupertino. Her favorite place is the Duke of Edinburgh Pub and Restaurant, conveniently located between areas of Apple’s main campus.

Dive Apple has eight Facebook friends in total, most of which also include the word “dive” in their names, like Diver Diverson, Dive Johnny Le, and Diverini Smith. It is believed that all of these profiles — which each have different levels of privacy — belong to App Store reviewers.

The owner of the Dive Apple page uses a lot of iOS apps to upload content, like photos and videos, many of which — such as “Telefir Login” and “Zliq” — cannot be found in the App Store. This suggests those apps were either rejected by Dive Apple, or that they’re still going through Apple’s review process.

The page was highlighted to RWW by a number of iOS developers who noted that Dive Apple was the first person to use their app after its submission. One writes:

I read your article about Dive Apple. I can confirm that ‘she?’ was one of the very first users of our app when we first submitted it to Apple. When we first soft-launched, we did some research on anyone signing up in Cupertino and we uncovered the same things you did.

Those things include lots of photos of Apple gear, like desks littered with iMacs, iPod touches, and iPads; Apple-branded mugs, and interesting documents. One of those is entitled “App Review Checklist,” and reads, “…storing an app from complete, make sure to claim the app back.”

It makes little sense, but unfortunately the page is covered by pens and sticky notes, so it’s hard to make out what exactly the document says. 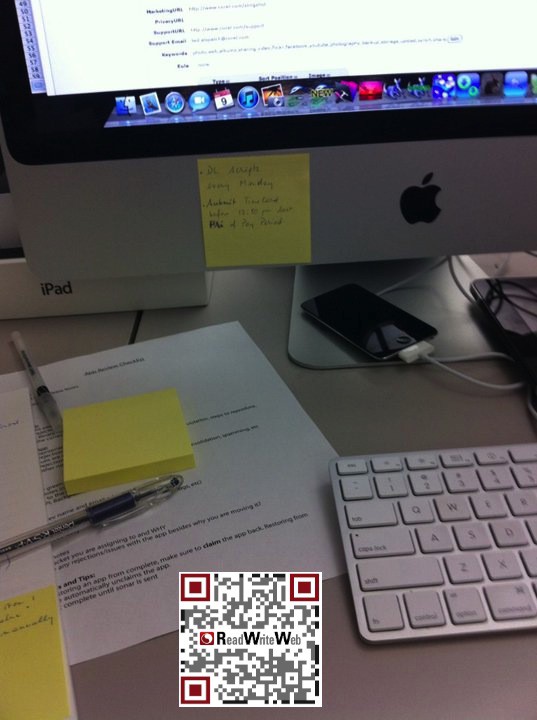 Unfortunately, there are no images of unreleased Apple products of other top-secret materials. But this profile offers a very rare and interesting insight into the testing iOS apps are put through before they get their approval stamps.