A recent update to the iTunes Terms and Conditions adds an interesting clause regarding free trials for in-app subscriptions in the iOS App Store. Ever since the launch of the App Store in 2007, users have been clamoring for some kind of demoing system for paid apps. It looks like Apple may be slowly making strides towards that reality.

Publishers “may offer a free trial period” via in-app subscriptions in an iOS app, according to Apple.

Here’s the section in the new iTunes T&C:

Based on Apple’s wording, it looks like this feature is initially for magazine and newspaper publishers, as “certain” in-app subscriptions of this kind “may be designated as “Newsstand” products, in which case they will appear only within the Newsstand application on your device after download.” For instance, The New York Times could offer a free trial period for its $14.99/month in-app subscription to iOS users. You could get the experience of a full subscription for a little while to see if the content is worth your money. 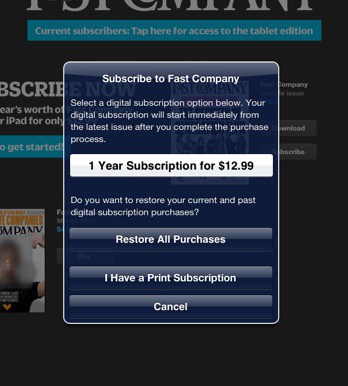 Apple introduced in-app subscriptions in February of 2011. Many content publishers now use Newsstand to distribute subscription-based magazines and newspapers to users via the convenience of billing through the iTunes Store. Most titles come with a free issue in order to hook you into a full subscription, so Apple’s new reference to “free trial periods” is likely intended for more than just Newsstand.

Now it’s important to note that this new free trial period reference does not mean we’ll start seeing full-fledged free trials for App Store apps. Apple is talking about in-app subscriptions specifically in this instance. Many iPhone and iPad developers have circumvented Apple’s restrictions on app trials by offering ‘lite’ versions of their apps for users to download and try. The experience is far from ideal, but it’s all that can be done at the moment.

But this news does raise an interesting question: How should Apple implement free trials in the App Store? What would you, the user, like to see? If you’re a developer, please get in touch and let us know how in-app subscription trials could be leveraged for different types of apps.