Google just took the wraps off its big software lineup for 2018. If Apple executives were watching, there’s a lot they should be worried about.

Artificial intelligence has always been one of Google’s strengths over Apple. But in 2018, the search company is going all out, putting AI in everything. Pretty much every app the company has is getting some new machine-learning tricks in the next few weeks that make certain iOS features look ancient.

Check out the biggest announcements from this morning’s Google I/O keynote.

With the development of Android P, Google focused on three areas: intelligence, simplicity and “digital wellbeing.”

By using AI and machine learning, Android P aims to make life easier without you even noticing. The new Adaptive Battery feature uses on-device machine learning to maximize your battery life. It predicts which apps and services you’ll use — and which you won’t — to dramatically reduce CPU usage and save power. Similarly, Adaptive Brightness uses machine learning to take into account your personal preferences and the ambient lighting around you to decide the appropriate screen brightness for you.

Android P also brings some new volume controls. The slider adjusts the media volume by default instead of your ringer volume. Rotation modes have been changed so you can control when an app goes into horizontal orientation.

Google says helping people manage their digital wellbeing — aka how their smartphones affect their lives — is more important than ever. A new dashboard has been added to give users a better idea of how much time they’re spending in apps. You can also set goals to only spend a certain amount of time per day in each app. Once you hit your limit, Android P grays out the app.

Shush mode has been added to turn on Do Not Disturb mode instantly. All you have to do is place your phone face down on a table, and all notifications will be turned off. Wind Down mode lets you set your bedtime and then turns the display to just black and white when you try to use your device in bed.

Android P is also taking a few swipes at the iPhone X by literally stealing its navigation. The three-icon array of on-screen buttons at the bottom of Android phones is going away. In its place, Google is adding one oblong button. Just like on the iPhone X, you can swipe on the button to switch between apps, go to the home screen or activate multitasking mode.

The Android P beta rolls out today on a number of flagship Android devices.

An updated version of Google Maps aims to keep you in-the-know about what’s going on around you. There’s a new tab called “For You” that’s designed to tell you about events in neighborhoods you care about.

Your Match uses machine learning to combine what Google knows about millions of places with what you’ve added to Maps to help find places you’ll like best. Maps also lets you create shortlists of places to visit by long-tapping on search results. You can then share those shortlists with friends so you can decide where to go collaboratively.

Directions have improved, too. You can now hold your phone up to the world in front of you and Maps will overlay walking directions that make finding your way around a new city easier.

The augmented reality future Apple envisions is already here with the powerful new Google Lens app, which can now recognize a lot more than just text. Google is integrating Lens right into the camera app on Pixel and other third-party handsets next week.

Now, when you point your camera at an object, for instance a pair of shoes, Google Lens can identify the item. It even works on menus. Point Lens at a restaurant menu, tap the dishes, and the Google Assistant will tell you what those dishes are.

Google is also working to make Lens work in real time. Instead of having to snap a picture of an item you want to identify, Lens will do it in real time as you move your camera around.

Siri is starting to look downright antiquated next to Google Assistant’s new features. The digital assistant is smarter than ever — and even has some new voices that use a technology called WaveNet to make it sound like John Legend is actually talking to you.

Talking to Google Assitant is easier now, too. You no longer have to say “Hey Google” every time you have a query; just say it once, then follow up with new questions or commands and the Assistant will continue listening. Google is also making the Assistant more family-friendly — particularly when it comes to teaching manners. When you say “please,” it recognizes that and comments on your politeness. 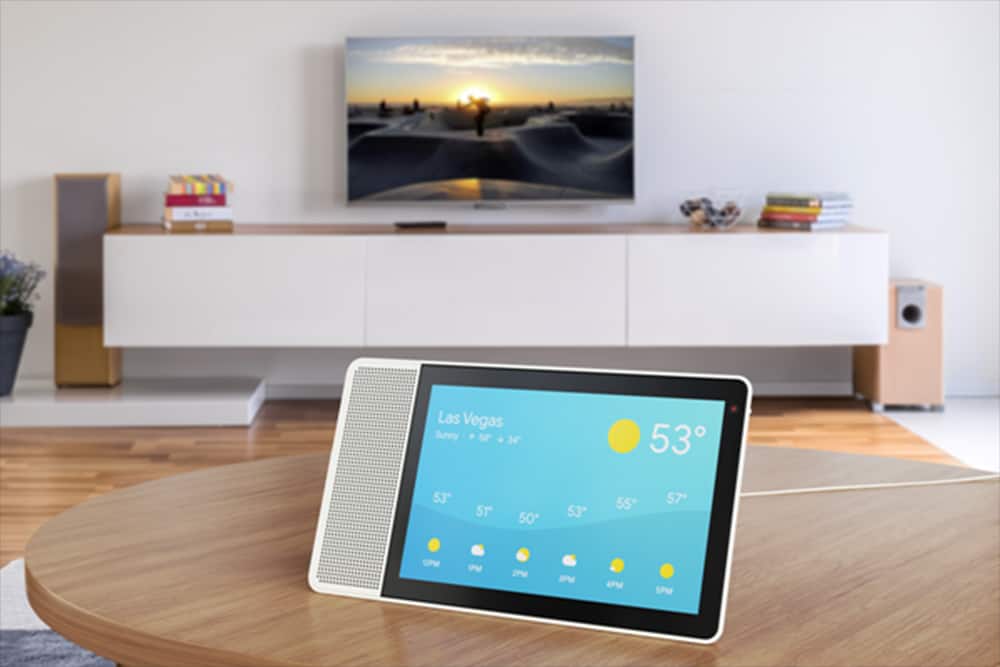 Google’s new Smart Display is basically a Google Home speaker with a screen. You can use it to enjoy photos, watch videos, read recipes and search results — and lots, lots more! The Smart Display can show your Google Photos, show you live TV shows and YouTube videos, etc. And it’s controlled using only your voice.

You can also use the Smart Display for video calling, to keep an eye on your home with smart cameras, and to use Google Maps. Google is also adding a food ordering and delivery service. It has teamed up with the likes of Domino’s, Starbucks, Dunkin’ Donuts and others.

To make digging into the news easier and less biased, the updated Google News app gets a new section called Full Coverage that aims to give users the complete picture of a story. It takes information from a whole bunch of sources to provide you with everything you need to know. You won’t need to search for more. Headlines tell you exactly what’s happened, while a timeline helps you keep track of developments since the news broke.

Tweets, opinions, analysis, comments … it’s a big bundle of content related to whatever big news story you’re looking at. All served up in the Google News app. Everyone sees the same content when they use Full Coverage. It isn’t personalized, so you don’t miss out on anything that Google thinks you might not want to see.