The iPad has earned first place in the J.D. Power and Associates customer satisfaction survey for the second year in a row, just a month after Apple’s iPhone secured the award for the ninth time. The popular slate scored 836 out of a possible 1,000 points having been rated on performance, ease of operation, styling and design, features, and cost.

The J.D. Power customer satisfaction award for tablets is now its second year, which means the iPad is the only device to have secured one to date. It beat the Kindle Fire, which scored 829 points, to the top spot. Amazon’s device ranked better in the cost category, but the iPad was the only device to be ranked “among the best” with five out of five J.D. Power circle ratings. 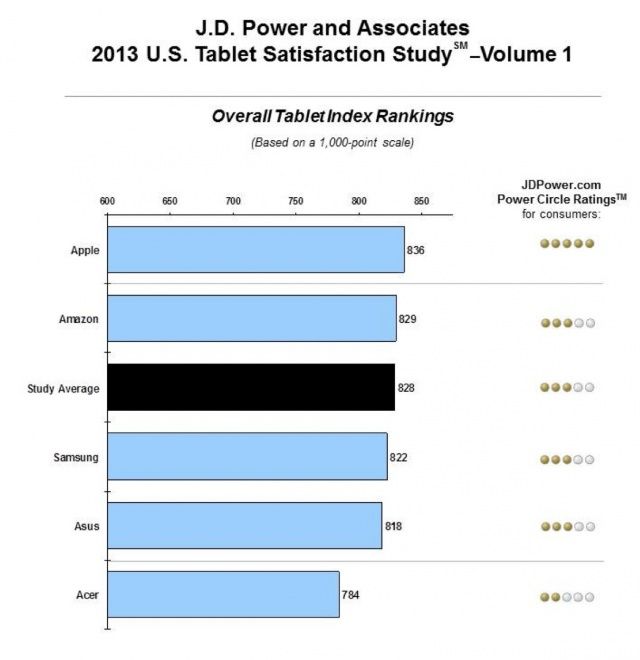 The study average was 828, and Apple and Amazon were the only two companies to beat it. Samsung came in just below with a score of 822, securing third place, while Asus scored 818, and Acer scored 784. 1,857 tablet owners took part in the survey.

The survey also found that 27% of tablet owners plan to buy a new slate within the next 12 months, compared with 37% in 2012. 94% said that when they do purchase an upgrade, it’ll be from the same manufacturer.

Back in March, the iPhone earned its ninth consecutive J.D. Power and Associates award for customer satisfaction, beating off competing handsets from Nokia, Samsung, Motorola, and more.