Siri is undoubtedly one of the biggest selling points for Apple’s new iPhone 4S, so it’s understandable every iOS user wants to see it on their older devices. But despite a report that claimed the Cupertino company is working on Siri for the iPhone 4, it has confirmed it currently has no plans to bring Siri to older devices.

In an email to Cult of Mac’s Michael Steeber, who contacted Apple to question Siri’s expansion, the company crushed dreams of the digital assistant’s introduction to anything other than the iPhone 4S:

Engineering has provided the following feedback regarding this issue:
Siri only works on iPhone 4S and we currently have no plans to support older devices. 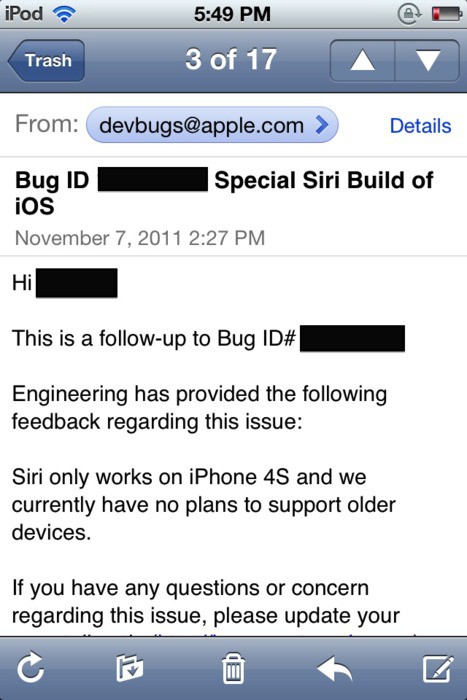 However, even after speculation surrounding Siri on the iPhone 4, this is the kind of response from Apple we were expecting. I mean, Siri, along with Apple’s dual-core A5 processor and a new 8-megapixel camera, is one of just three reasons to buy an iPhone 4S right now; Apple wouldn’t take one of those away with promises of Siri on older devices and damage sales of its fifth-generation iPhone.

Despite having no plans “currently,” then, let’s not rule out Siri on older devices altogether. We already know — thanks to hacks — that devices as old as the iPhone 3GS can handle the feature, so there’s no reason not to believe other iOS devices, in particular the iPad, won’t get it at some point in the future.