July 21, 1999: The iBook, Apple’s colorful clamshell laptop that’s a hybrid of the iMac and the PowerBook, arrives and launches a Wi-Fi revolution.

Apple’s new AirPort networking card is the key component that delivers cable-free internet access to the masses for the first time.

Visually, the iBook resembled a continuation of the “lickable” aesthetic of the iMac G3. It came in a range of bright translucent colors and a curvy design, with a rubberized texture that made people want to reach out and touch it. In the same way that the iMac appeared slightly gelatinous and biological, the iBook took its inspiration from nature with a “clamshell” design which looked a bit like an undersea creature.

The comparison with the iMac was cemented in ads, which called the iBook the “iMac to go.” Like the iMac, the iBook boasted a PowerPC G3 CPU, and standard USB, Ethernet, modem ports and optical drive. Also like the iMac, it ditched the floppy drive. To take advantage of the AirPort card, the iBook included a custom internal slot and built-in antennas. In addition, it was Apple’s first Mac to use the company’s “Unified Logic Board Architecture”, which compressed the machine’s core features into two chips, alongside AGP and Ultra DMA support. 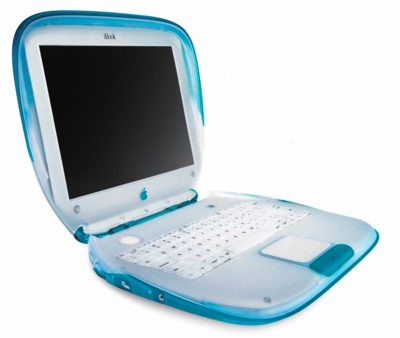 The iBook boasted the then-novel touch of a latchless lid which “woke up” the laptop when it was opened. Although this conceit is used by virtually every laptop maker today, it was new at the time — and, like the best Apple innovations, offered a subtle reminder that the machine was approachable and easy-to-use for novices.

The $1,599 iBook was a big hit with consumers immediately. After the mess that had been Apple’s laptop line for much of the 1990s — when Performa, Quadra, LC, Power Macintosh and PowerBook models offered a bewildering number of options for new customers — the iBook’s aesthetics and pricing helped make it clear who it was aimed at. The laptop became a smash with consumers, and many retailers took pre-orders ahead of its launch.

While the design was superseded by the more serious-looking white polycarbonate iBook in 2001, the colorful “clamshell” version (dubbed “Barbie’s toilet seat” by some critics at the time) was an important step in Apple’s development. Its design was a great piece of marketing for Apple, while its fun aesthetic made what was then still thought of as a niche computer company look welcoming and friendly.

The focus on Wi-Fi, meanwhile, didn’t just cement Apple’s ability to innovate technologically, but helped usher in the kind of connectivity that would make features like iTunes such a success in the decade that followed.

Did you own a 1999-era iBook? What was the first Apple laptop you did own? Leave your comments and reminiscences below.