The next big iOS update for iPhones and iPads was unveiled by Apple today at WWDC and it comes with some gigantic new features to go along with an even bigger Siri upgrade.

iOS 10 is the “mother of all releases” according to Tim Cook. It comes with 10 big new features that make Siri more powerful than ever, plus some much needed changes to the way you interact with the lock screen and homescreen thanks to interactive notifications, widgets, and deeper 3D Touch integration.

Apple has opened up Siri to developers, which will allow the digital assistant to do more than ever before, like hailing an Uber, starting workouts, sending payments to friends, VoIP calling and much more.

Messages is getting a huge update in iOS 10, with end-to-end encryption. Apple is bringing support for rich links and in-line video so you don’t have to leave the app to see what a friend shared. Emoji are 3x bigger and the QuickType keyboard now recommends emoji that could replace words in your texts.

Bubble effects for Messages will allow you to change the size of the text in your messages. Sensitive messages can be covered up using Invisible Ink so the recipient has to slide over it to view the text. Handwritten messages and Digital Touch have been added to make Messages more personal. There’s also some full screen effects you can send too.

Apple has also opened iMessage to developers, allowing third-party apps to interact directly though the app. To access different iMessage apps, Apple has added a new “App Drawer” on the messaging screen so you can do stuff like order food as a group within the app, or send a payment with Square Cash.

In iOS 10, QuickType is getting Siri Intelligence, which uses deep learning to give better context for responses and suggestions. If someone asks you where you are, Siri will suggest sending your location. If someone asks for someone’s phone number, it will bring up that person’s info if you have it. It can also intelligently schedule events for you. It also support multi-lingual typing, meaning no more keyboard switching if you speak two languages. 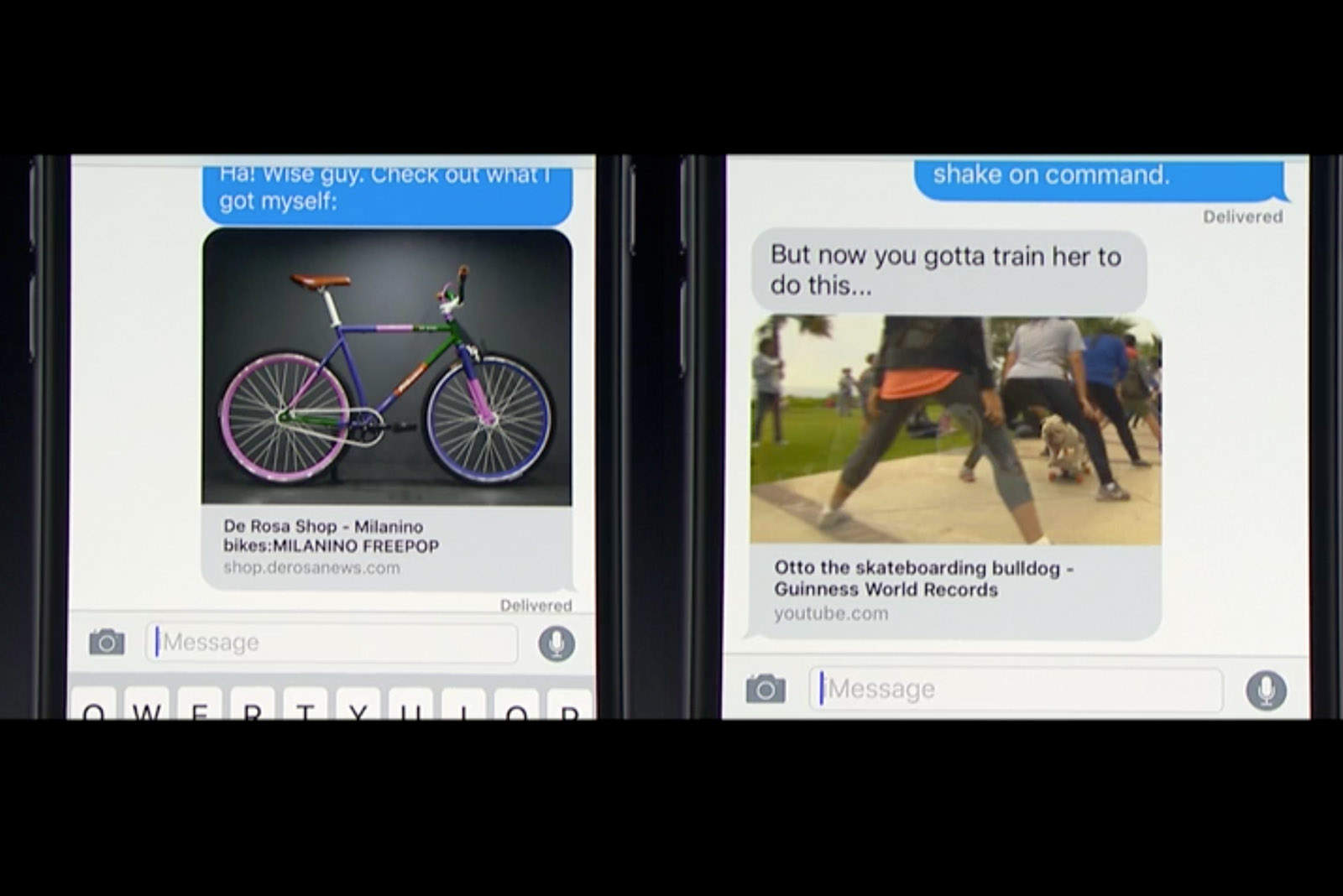 Photos is adding bunch of new features. The first is a new map section that shows where you’ve taken your pics like Instagram. The biggest addition is Memories, which are created using artificial intelligence to analyze your photos and videos based on location, time and people to automatically create a movie of the memory.

Maps is getting an all-new design that makes it easier to access the controls. The app is also more proactive and has better search filters. Navigation now includes the traffic on your route and quick controls like the option to see nearby gas or food stops on your route. Apple is also opening up Maps to developers, so you won’t have to leave the Maps app to interact with related apps.

Apple Music is getting redesigned with a much simpler interface. It’s more intuitive and very white. Lyrics can be accessed when playing songs. For You has a new Discovery Mix, which is pretty much a ripoff of Spotify’s Discover Weekly playlist. 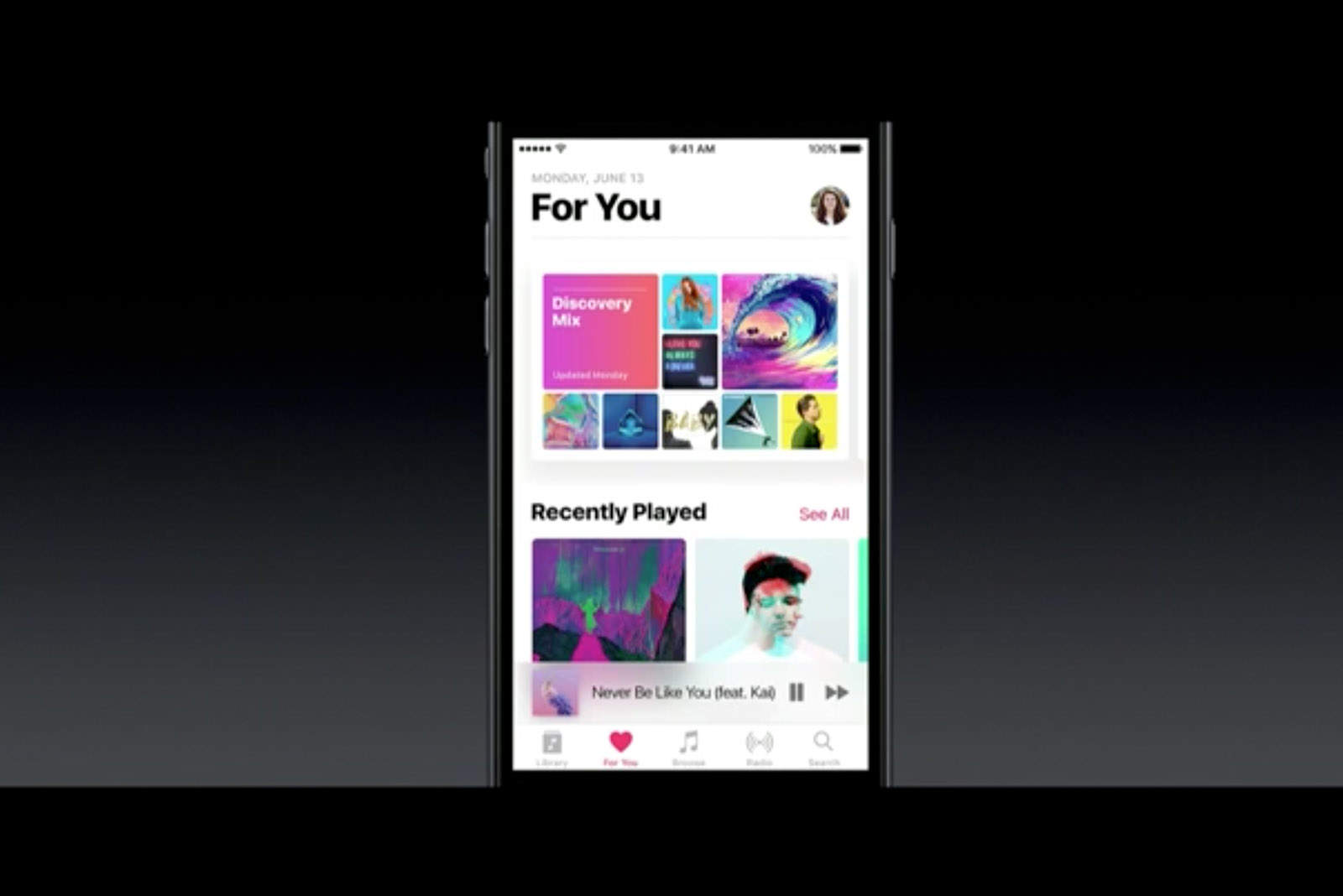 Apple News now has more than 2,000 publications with 60 million monthly active users. The app is also getting a redesign, which looks a lot like the new Apple Music. Very simple. Big text. It recommends stories for you and serves up breaking news alerts. There are also subscriptions so you can support your favorite publications (like Cult of Mac).

Apple announced a new Home app for iOS 10 that makes it a lot easier to interact with HomeKit-supported accessories. You can pull up the app and turn off your lights, adjust the thermostat, lock your door and more. The app is built right into Control Center so you can do quick tasks like check your front door security camera from the lock screen. The Home app also includes automation with geofencing and scheduled tasks.

Phone calls on the iPhone are taking a step into the future with voicemail transcripts. Carriers can now include information on the screen, which could be a big help in avoiding scammers. The lockscreen also integrates with VOIP apps like Skype so you can answer calls quicker.

iOS 10 will also include Notes collaboration, conversation view in Mail, Live Photos editing, and Split View in Safari on iPad, so you can finally put web pages side-by-side.

The first preview build of iOS 10 will be available to developers today. A public beta will come out in July with the public launch coming in the Fall as a free upgrade.