Whenever rumors about a new product from Apple begin to pop up, so do the concept drawings, 3D renders, and mockups. The latest rumored Apple device to get the mockup treatment has been the iWatch, Apple’s supposed foray into wearable computing.

Already, I’ve seen no less than half a dozen concepts illustrating what people think the iWatch might look like. Some play heavily off of the design of iOS, others take design influences from the iPhone and iPad, and others yet attempt to emulate the 6th generation iPod nano, the closest thing that Apple has made to a watch so far. While all of these designs take influence from what Apple has already created, none of them take into consideration the external influences that shape the way Apple designs their own products.

As you may recall, Apple’s design department, and more specifically, Jonathan Ive, have always admired the work of Dieter Rams, Braun’s industrial designer from 1961 to 1997. Ive even wrote the forward for a book about Rams, As Little Design as Possible. Rams’s influence on Apple design is vast. No less than nine Apple hardware and software products explicitly borrow concepts from the designs of Dieter Rams, the most recent example being Apple’s Podcasts app, which in many ways appears identical to Braun’s TG 60 tape recorder.

So as the question arises as to what an Apple watch might look like, the most obvious place to start is by taking a look at the history of Braun design. Under the direction of industrial designers Dieter Rams and Dietrich Lubs, Braun released a series of watches and alarm clocks in 1971, designed around Rams’ 10 Principles of Good Design. Here’s a great look at one of them.

In much the same way that Apple’s products appear stunningly minimal, yet highly functional, this collection of Braun watches was created with the philosophy of “less is more.” No unnecessary features were added to the devices, and every detail corresponded to function of the watch. Sound familiar?

After disappearing for many years, Braun announced almost two years ago, in April of 2011, that it would be reissuing its line of Dieter Rams designed watches. Taking a brief look at some of these watch designs reveals a treasure trove of ideas that Apple could be pulling influence from in designing the iWatch. While many of the analog watch designs are simply straightforward, minimalist watches, the digital ones are truly fascinating. 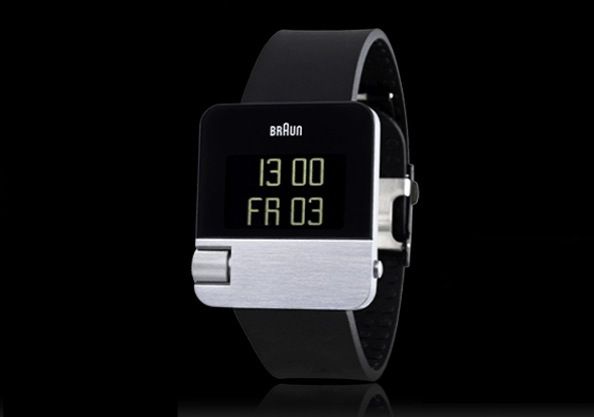 Take for example, this watch. Its stainless steel “chin” is somewhat reminiscent of the iMac, a classic Apple design. Alternatively, this similar watch resembles the 6th generation iPod nano, while also embodying the dark colors and rounded edges of the iPhone 5.

One design characteristic of this entire collection is clear, however. Each watch focuses on clean lines, simplicity, and utility- a stark contrast to a lot of the extravagant concept art on the web. If you recall the state of Apple rumors in 2006, you might remember the iPhone concept drawings that began to populate the web. The same thing happened in 2009, right before the launch of the iPad.

Both of these products were rumored, much like the iWatch, to heavily lean on the designs previously created by Apple in the form of the iPod, and later the iPhone as the iPad’s time came around. It turned out, however, that the iPhone looks nothing like an old iPod, and the iPad has a unique character, different from other iOS devices.The same will likely be true of the iWatch.While all of Apple’s products share a common design language, each one is unique and can stand alone.

Another place of interest to reference in regards to the iWatch is Porsche. Although Steve Jobs, unlike many other Apple executives, didn’t wear a watch later in life, it’s hard to find a photo of him as a young man without one. In fact, according to Jay Elliot, a former Apple VP, Steve kept a box of expensive Porsche watches in his office in the early days, identical to the kind he wore himself. Whenever someone admired his watch, he would take it off at that very moment and hand it to them to keep, returning later wearing an identical one. The watch was described as having a titanium band, and likely looked similar to today’s Titanium Chronograph, also a reissue of an old design.

With the iWatch, Apple has a really big opportunity to change the way we think about what watches are. They’ve been continuously reshaping consumer electronics, starting back in the 1970s with the Apple II. To assume that Apple will simply take the work they’ve already done with iOS, squish it down a little bit, and call it a watch is assuming that Apple no longer cares about providing an end-to-end, unified experience, which couldn’t be farther from the truth. The iWatch has a ton of potential, and I think that looking at those who influence Apple the most holds the keys to what we might see come out of Cupertino next.