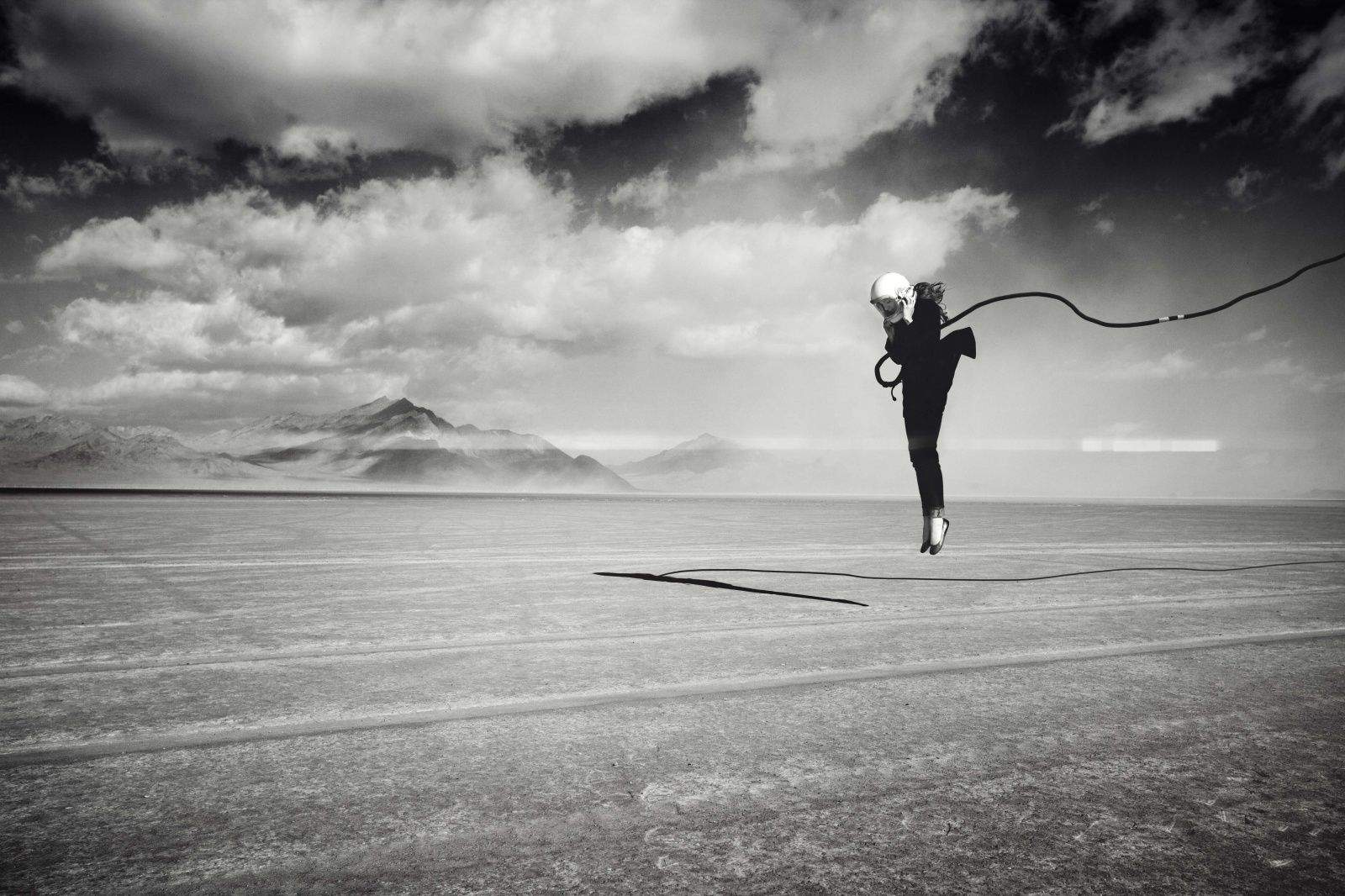 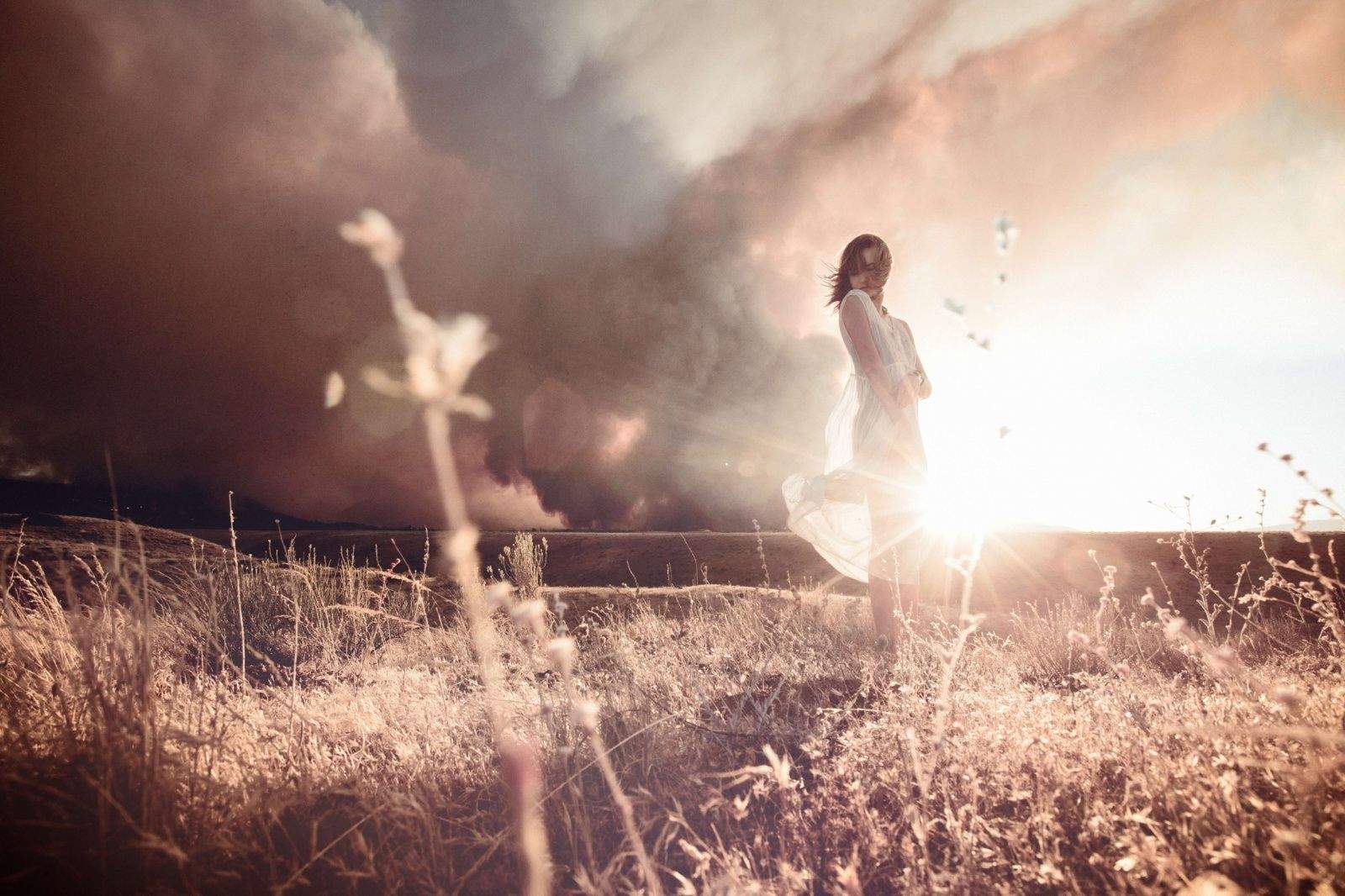 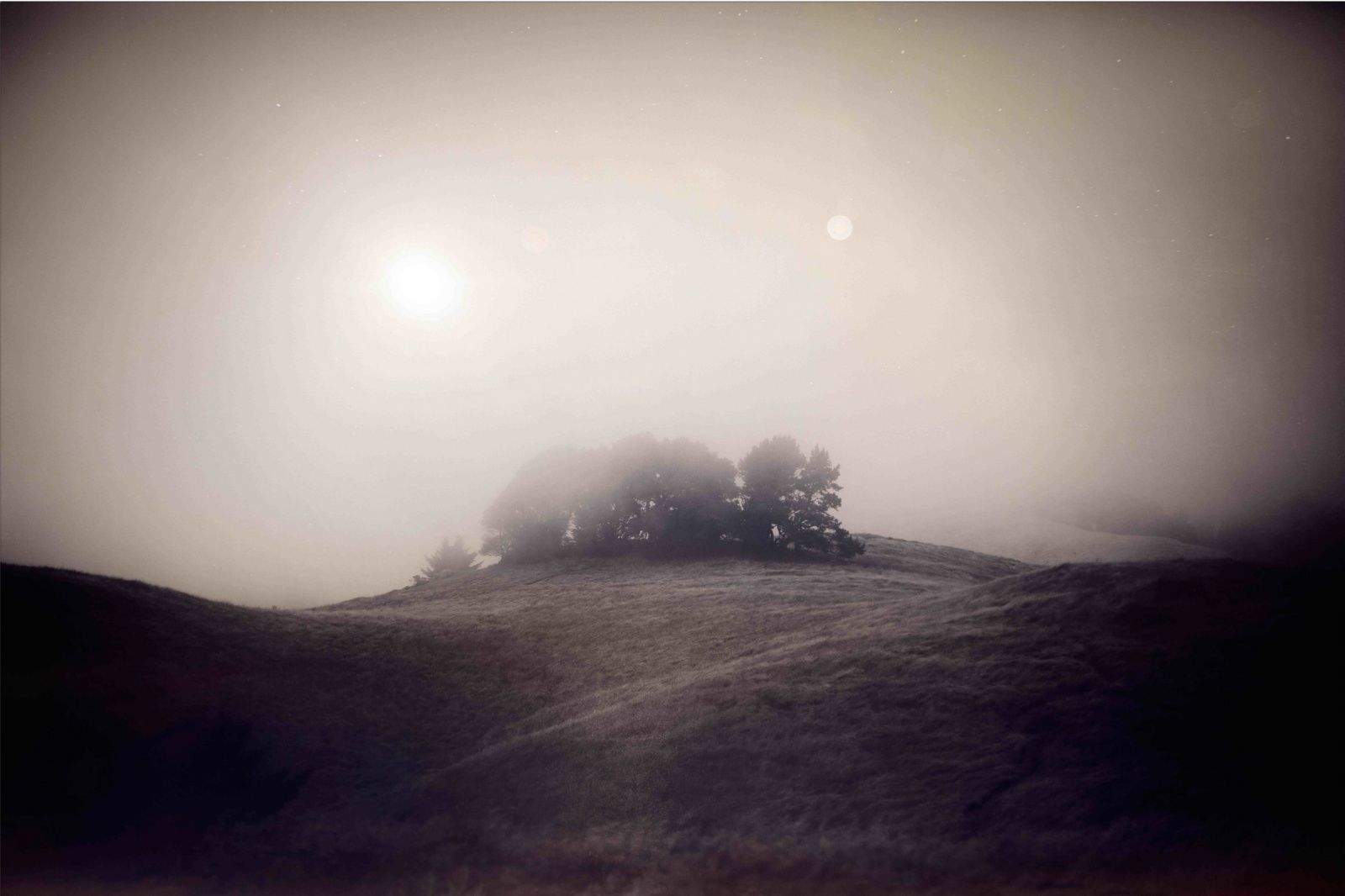 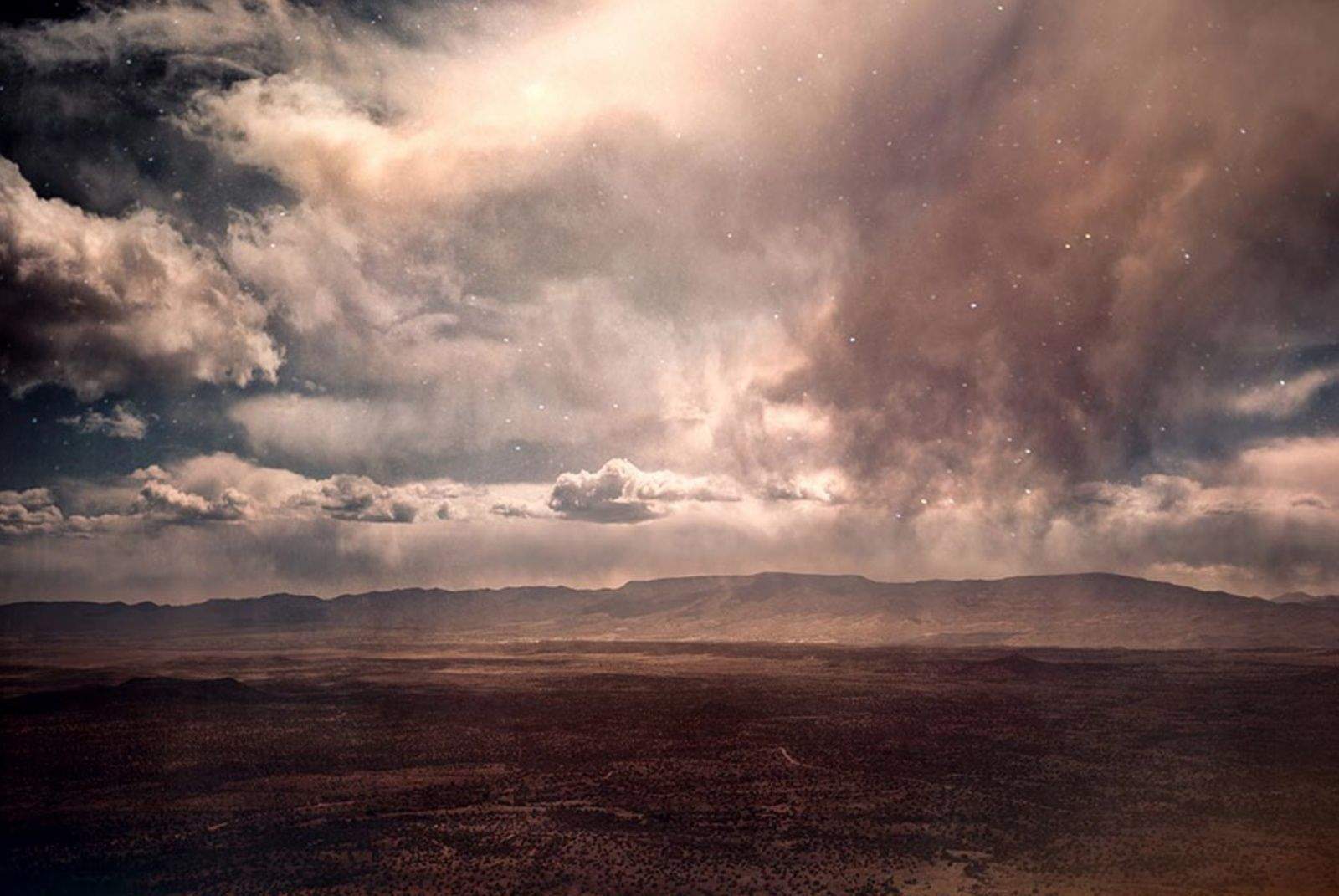 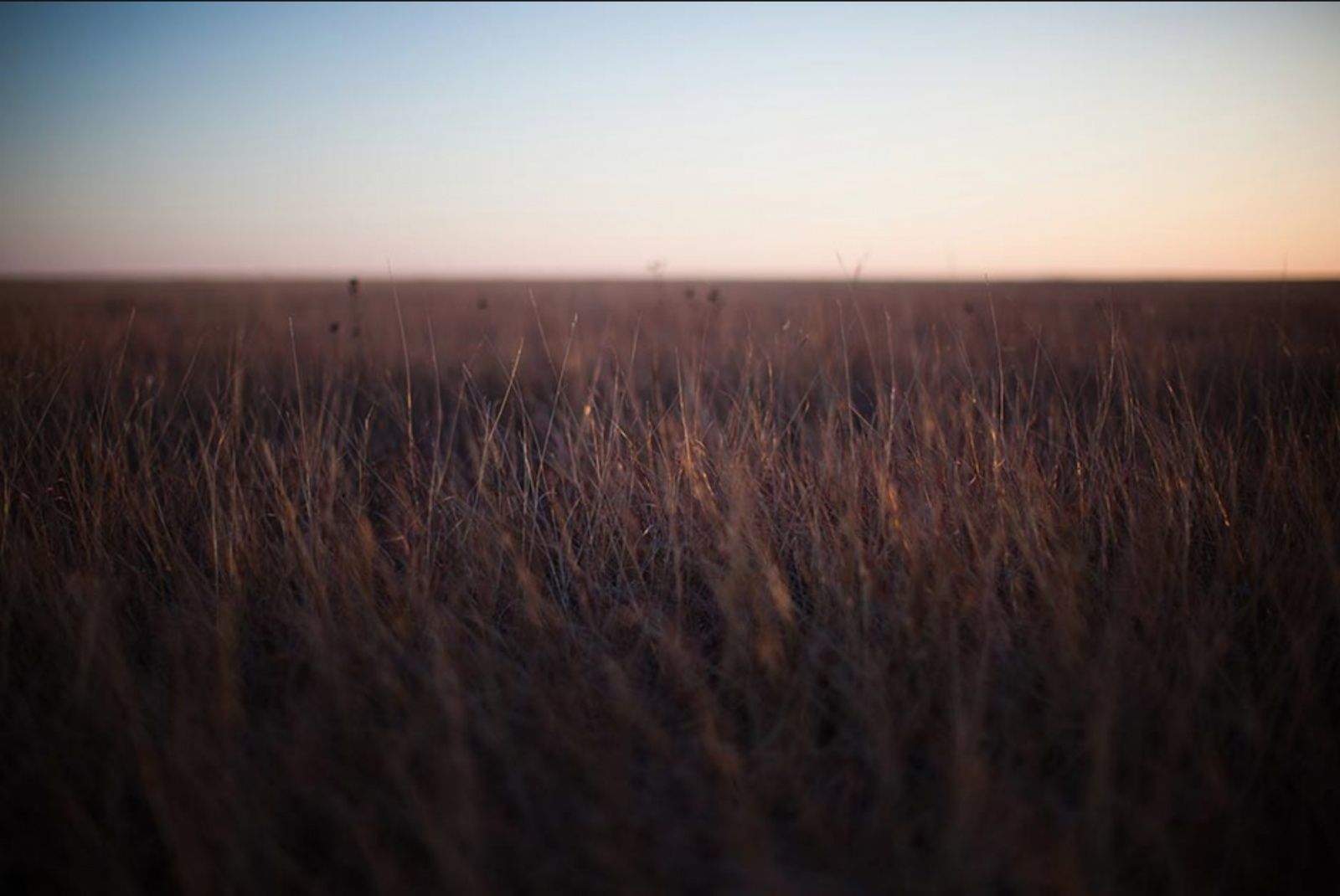 Cole Rise has nearly one million followers on Instagram and the hottest new photography app in the App Store. He also made seven of Instagram’s built-in filters, which explains where the name for the “Rise” filter originates.

His app, Litely, is less than a month old with over 3 million downloads. Considering he was one of the first 100 people on Instagram, he really gets mobile photography and where it’s headed. During our conversation, Rise goes behind the scenes of Litely’s development, shares his influence on Instagram during its early days, and gives some great advice on how to take better pictures.

“I’m a huge nerd,” Rise tells me over Skype video chat as he wanders the streets of San Francisco holding his iPhone to his face. He explains that he had just gotten a haircut because he will be flying to New York the following week to talk about Litely on CNBC. His new app had been on the App Store for a couple of weeks at this point, and thanks to a prominent feature by Apple, it had shot to the top of the charts.

During our interview, I quickly realize that Rise’s life as a photographer and entrepreneur has been quite the adventure since he licensed his first photo for a CD cover in 2005. He has traveled the United States on a motorcycle taking pictures for Harley Davidson, photographed the Norwegian wilderness for the country’s tourism board, had work appear in National Geographic, and shot New York Fashion Week.

In 2012, a web design startup he co-founded called Particle got bought by Apple for an undisclosed sum. Rise and his team were brought in to lead the “innovation team” for the iAd platform. After working at Apple for nearly a year, Rise felt the “entrepreneurial itch” to make something else on his own; an app he’d been kicking around in the back of his head. He had to leave Apple to pursue it because when you work at the mothership, you’re not allowed to release your own apps.

By now, Rise was already selling filter presets under the name Litely for programs like Lightroom and Aperture. He prides himself on making digital photography look timeless.

“A photo shouldn’t look edited,” he tells me. “What do you want your photos to look like in 50 years?”

The filters Rise makes come from experiences like shooting 4,000 photos in Norway and developing presets in Lightroom for certain tones and moods. Instead of grainy, over-saturated looks, his presets add subtle tones and enhancements in a way that’s almost invisible.

“Taking desktop quality filters and bringing them to a phone is no small task,” explains Rise, who worked for three months to get the presets’ colors in the Litely app just right. He brought on developer Sam Soffes, who previously worked on apps like Hipstamatic, to write the code. 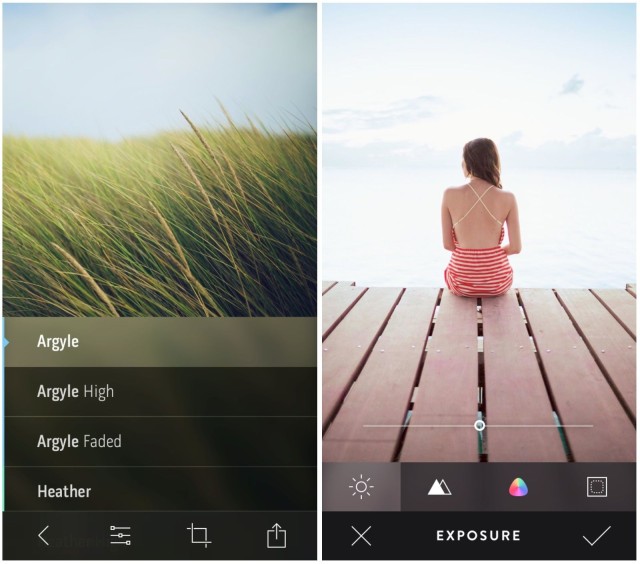 Rise wanted to make a photo editor for iOS because “mobile devices are replacing the family camera.” He also wasn’t pleased with the complexity of the apps out there, so the decision to make Litely was a no-brainer.

When using Litely, it’s impressive how easy the app is to navigate. Everything is designed to be almost entirely gesture-driven. Instead of having to scroll through a list while tapping each preset to see it take effect, Litely shows you live previews as you flick through a vertical list of presets. It’s a much more efficient way of navigating.

“The feature that I love the most is that I don’t have to tap as much,” explains Rise. “This app was basically born out of many years spending way too much time editing pictures on my phone.” 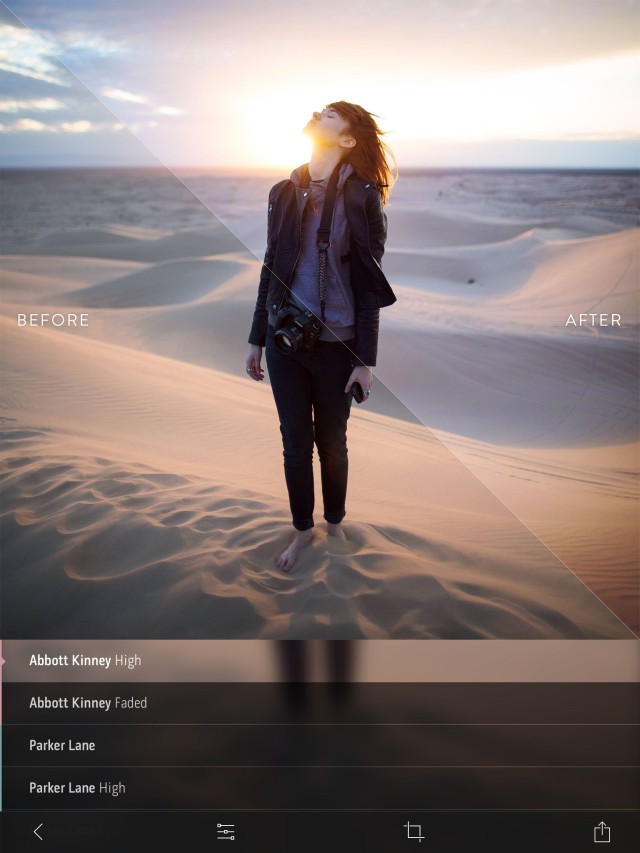 Unlike my other favorite editor on iOS, VSCO Cam, Litely is a universal download with a scaled-up iPad interface. You can add photos from your Camera Roll or through Photo Stream, and I’ve found editing on the iPad’s larger display to be quite enjoyable. Rise is toying with possibly releasing a Mac app in the future.

Beyond the few preset packages that can be download with in-app purchases, Litely’s editing tools are pretty minimal right now. There are only four tools for settings like exposure and vignette, which were included at launch because they’re the only ones Rise uses in Lightroom for his professional work. Straightening, color temperature, shadows, and contrast tools are coming in a future update.

Litely can share pictures to a number of apps and services, including Instagram, a social network Rise has been active on since its beginning.

He was beta user number 75 before Instagram was first launched to the public. He saw the app’s “coming soon” webpage and emailed the developers to see if they wanted to get drinks. The result was that he got to use the app with only 99 other people for a few months, in which he quickly realized that “this was going to be fucking huge.”

Rise has a great story about designing the Instagram icon. The day before the app was going to be featured by Apple in the App Store for the first time, Rise got a call from co-founder Kevin Systrom. “Hey man, we’re gonna get featured tomorrow,” Systrom said. The problem was that the app’s icon looked too similar to other cameras, so Apple couldn’t use it for legal reasons.

Rise offered to design a new one. Systrom gave him 45 minutes.

After hanging up, Rise got to work. He had “already been thinking about camera icons” for awhile, “so it felt natural.” He finished in under an hour, emailed it to Systrom, made a little tweak, and then Instagram was shipped off to Apple.

Rise iterated with the Instagram team over the next six months to make the icon what it still is today.

“Instagram is like a Blockbuster cult classic, and I got to write a couple songs for the soundtrack”

Beyond the icon, Rise is responsible for seven out of 20 of Instagram’s filters: Amaro, Hudson, Sierra, Sutro, Mayfair, Willow, and Rise. The last one was named after him by his friends at the company, which sold to Facebook for $1 billion in 2012.

“Instagram is like a Blockbuster cult classic, and I got to write a couple songs for the soundtrack,” Rise tells me. “I feel very lucky”

Before we hang up, I ask Rise if he has any advice for the aspiring photographers out there. I expected a list of tips and tricks, but Rise’s advice is much simpler than you’d expect.

“A photo is a story, so tell a good story. Do something crazy. Spend the extra five min walking in a direction you’ve never gone before and have your camera at the ready. You never know what’s just around the corner.”