Games! They’re awesome. There are a ton of them released every year, making best of lists like this one fairly difficult. In the interest of our space and your time, we’ve narrowed the field down to ten, with what we feel are the best of the best games out there for Mac as well as for iOS. All of these games were released this year, and while all of them may not be blockbusters you’ve seen on other end of year roundups (this is on purpose), they’re all of them worth your time and money.

So, sit back, relax, and enjoy the following top ten games for iOS and Mac. 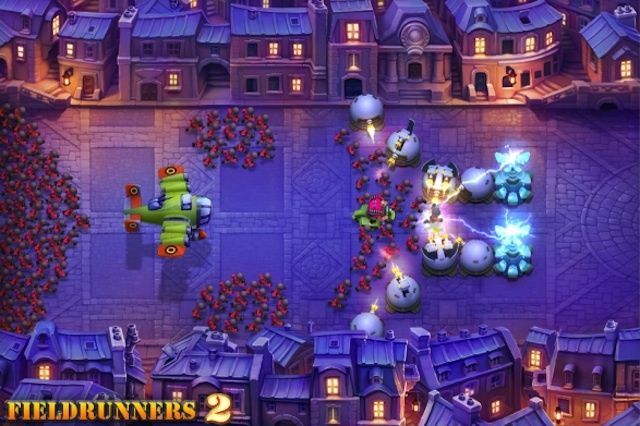 Fieldrunners 2 takes all the gameplay goodness from its award-winning predecessor and polishes it to a finely-iterated sheen. Yes, there are more units, more towers, and more bombs, but more doesn’t always make a game better. With Fieldrunners 2, Subatomic Studios has built a tightly-focused, well-balanced tower defense game that just begs to be played, continuously. You must stop the invading soldiers from making it thorough fixed-path levels as well as player-created mazes of towers of varying ability. Some levels just ask you to survive for a certain period of time, or blast a certain number of creep soldiers before the timer runs out. Play on easy, medium, or scary hardcore mode for extra rewards and challenges along the way.

Now here’s a brutally hard yet exceptionally brilliant game of quick reflexes, zen-like concentration, blindingly retro graphics, and a killer chiptune score, by an uber indie developer, Terry Cavanagh (VVVVVV). Called a “minimalist action game by its developer, Super Hexagon, available on iOS or Mac via Steam, hits all the right note for a gamer wanting a retro-inspired experience that channels games like Tempest or Asteroids. Tap on the left or right side of the screen to rotate your triangle avatar around, avoiding the ever-rotating and collapsing walls. Game time is measured in seconds, and while it always feels like your own fault for crashing into one, there’s always another coming at you from another direction. Oh, and everything blinks and pulsates to the music. Whew. 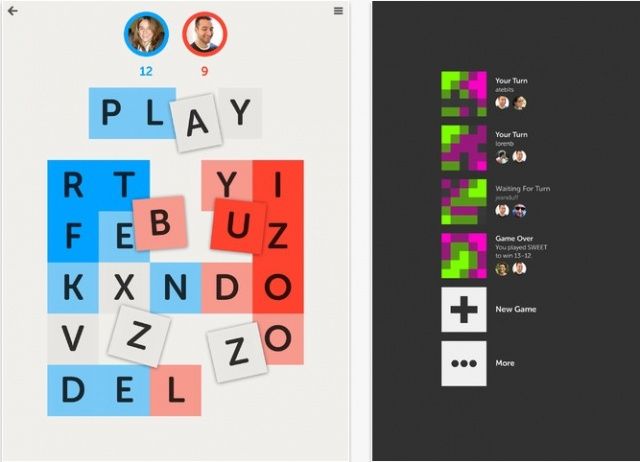 I know, I know, you’re wondering what a word game is doing on this list. Well, friend, this is the word game that essentially ended my search for any other word game. I’m easily bored with Scrabble clones where the only way to win is to know the shortest words with the highest score potential. Letterpress rewards a varied and prolific vocabulary, but the killer feature is how cutthroat the game play can become. As each player taps letters to create words from a visually delightful grid, Boggle-style, the letters turn colors: blue for you, red for them. Strategy demands making words out of the subset of letters that your opponent chooses to steal points from their score and turn the red letters to blue. Now that’s a fun word game.

If you haven’t played Bastion, yet, stop reading this now and grab it on Steam, on the Mac App Store, on iPad or iPhone, or on XBox Live. It’s that good. The game play mechanics are fun enough, with a hack n’ slash sensibility that doesn’t let up. The colors and art design is a visual treat, and the soundtrack, man, is one of the best video game soundtracks, ever. What takes this game to the next level, however, is the narration by “the old man.” This old dude, sounding like he’s right out of an episode of Firefly, tells the story of “The Kid” and the dying world of Ceylandia, full of pathos and humor. 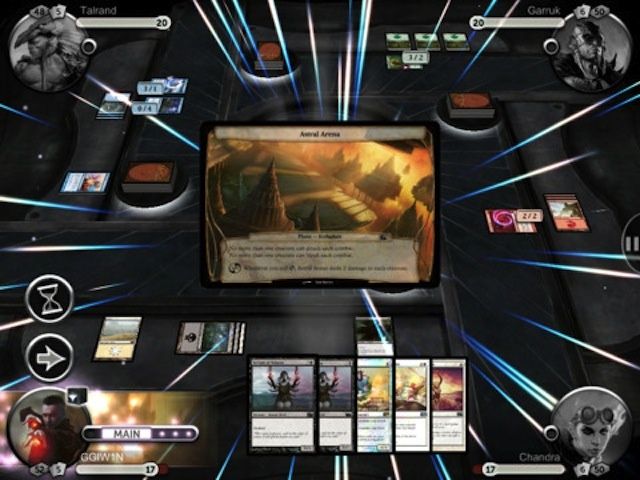 Deck building games are all the rage lately, but Magic: The Gathering is the one most think of when we hear the term. Whether you come to this iPad version of the game from the world of competitive play on tables with rectangles of laminated card stock or from the console video game version, you’ll still admit that Wizards of the Coast have created a faithful representation of their card game while still adapting it well to the touch interface of the iPad. The game play is familiar to anyone who has tried their hand at the game in any iteration, with gorgeous artwork, glowing animations, and both single and multiplayer modes available. 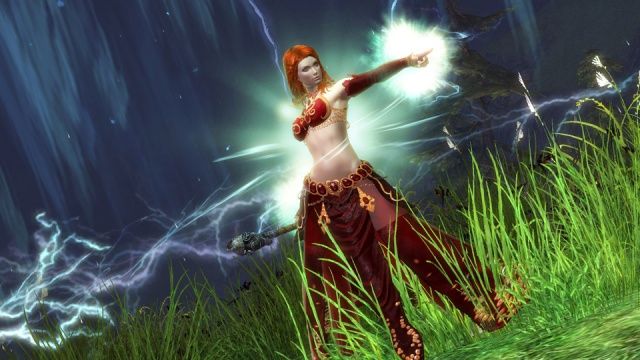 Guild Wars 2 mixes a high fantasy setting, a massive world with several distinct races, and an over arching story of cooperation and tolerance for difference with a familiar, yet not entirely traditional, take on the massively multiplayer online game. While the genre has been dominated by the likes of World of Warcraft, Guild Wars 2 brings enough polish to the table to make this a must play. The fact that you can buy the game once, and not have to pay a monthly fee surely helps the case, as well, but it’s the well-written story lines, engaging dialogue, whimsical environments, and interesting combat and exploration mechanics that keep players coming back for more, month after month.

No one knew that a point and click adventure game could traffic in such emotional themes until Walking Dead: The Game came on the scene. Every bit as gut wrenching and horrifying as the award-winning television show and comic book by Robert Kirkman it’s based on, the game stars an entirely different crew of survivors who move from place to place, never truly safe. Each of the major choices in the game play must be made in a split second, and carry through the rest of the episodes. Did you save the geeky kid or the pretty reporter in episode one? Your choice will matter, and you will feel every choice. I’m sure I wasn’t the only one wiping my eyes after several of these episodes. 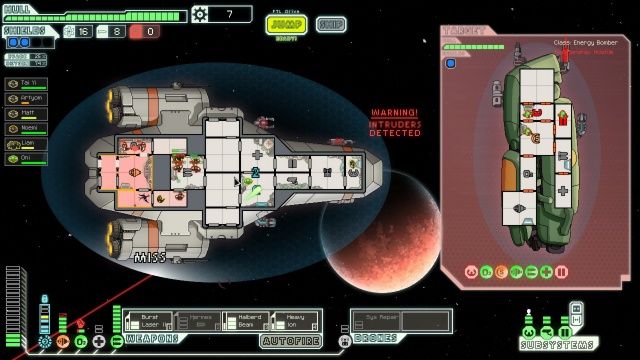 If you’ve ever dreamed of piloting a starship through space, fighting off alien aggressors, carrying cargo and knowledge from system to system, FTL might just be your kind of game. It gives you a ship, star-system jump capability, and a couple of starship officers, and lets you micro manage the heck out of all of them, jump after jump, encounter after encounter. It’s visually pixel-artistic, with a spacey-retro chiptune soundtrack and enough little things to manage to carry out your tasks than you can comfortably do without an intense amount of concentration and planning. It’s a brain workout, for sure, but also a delightful way to pass the time on your Mac. 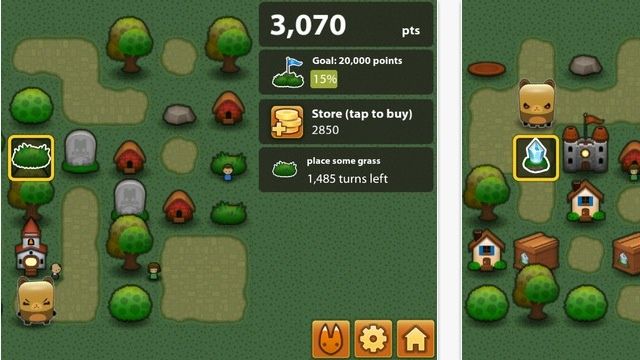 There’s a reason match-three games are so ridiculously popular. There’s something compelling about organizing and consolidating, and Triple Town does it exceptionally well. You start by placing tufts of grass down in groups of three in a cute, imaginary town. When there are three bits of grass next to each other, they combine to become a bush. PLace three more tufts of grass down, making sure the last bit is placed near the second bush. Do it again, only the third bush this time combines with the first two to make a tree. Three trees makes a hut. Your little people need huts to live in. You can see how fast this starts to snowball, leaving you panting and wondering where the time went at the end of a quick session on your iPad or Mac.

Thomas Was Alone, by Mike Bithell, is a joy of jumping, platforming, puzzling goodness, includes a delightful retro soundtrack by David Housden, cute little rectangular characters, and a fantastic narrative voiceover provided by Danny Wallace (Yes Man, Assassin’s Creed). Thomas Was Alone asks you to guide Thomas, the initial rectangle protagonist of the story, through monochromatic puzzle levels, increasing in difficulty slowly but steadily, while giving you a few more characters with varying abilities. If you enjoy whimsical storytelling, independent art games, or solving eventually fiendish puzzle environments, this one’s for you.