As a massive fan of first-person shooter games, I’m always looking for great iOS shooters that will help me get my fix when I’m away from a console. Thankfully, the App Store is home to some great FPS games from developers such as Gameloft, EA Games, Treyarch and Villain.

Our latest app list is a collection of the best FPS games in the App Store – check them out after the break!

Black Pegasus is the impressive sequel to Gameloft’s hugely popular Modern Combat: Sandstorm. The game features stunning console-quality graphics and new gyroscope controls for an even better gameplay experience. The online multiplayer mode allows you to engage in intense 10-player battles in 4 different game modes, with XP progression through 72 ranks, reward messages, unlockable weapons, and worldwide leaderboards. The single player campaign dives straight into the heart of a global modern conflict, with three playable characters across 12 battlefields. Featuring 15 real military weapons and instant slow-motion kill-cam effects. Black Pegasus further improves upon the exciting experience of its predecessor to deliver one of the most complete FPS experiences on the iPhone.

N.O.V.A. 2 features an unparalleled single-player campaign taking you through 12 chapters of hostile, yet amazing environments of various Orbitals. Take your pick of over a dozen weapons including the dual hand guns, assault rifle, shotgun, sniper rifle, rocket launcher, and alien plasma gun – and get ready to experience a whole new level of iPhone FPS gaming. When you’ve finished with single-player, indulge in 10-on-10 multiplayer combat in free-for-all, team deathmatch, capture the flag, freeze tag, and more; over 10 stunning multiplayer maps. The ranking and perk system ensures the more you play, the better you become, and Gameloft LIVE allows you to team up with friends and take on the rest of the world. 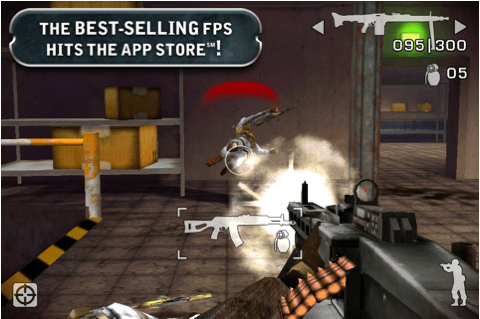 Based on the bestselling console game from Dice, Battlefield brings intense warfare to the jungle, snow, and desert, in close-quarter combat and in the air with state of the art vehicular combat. Take on 14 single-player missions across 5 incredibly detailed battle zones, wreak havoc on enemy forces with a plethora of powerful weapons and vehicles. Engage in 6-player online combat across dedicated maps in free-for-all and squad deathmatch, and choose from 3 different control systems to suit your gameplay style. 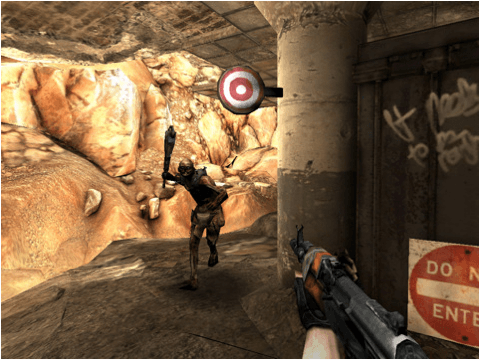 In this intense first-person rail shooter, you’re the star of a post-apocalyptic game show called Mutant Bash TV, in which you’re stalked by hungry mutants desperate to feast on your corps. Scour three pulse-pounding levels in search of ammo and cash pick-ups – armed with a pistol, shotgun or machine gun – and battle your way through the mutant-infested carnage. Featuring impressive, high-resolution graphics coupled with dynamic music and sound effects. At $1.99, with support for both the iPhone and iPad, Rage HD is a bargain for any FPS fan!

Unlike the others, Archetype doesn’t feature a single-player campaign – it’s dedicated to online mutliplayer and does a great job at providing a solid first-person shooter. It features 5-on-5 combat in three different game modes – including free-for-all, capture the flag and team deathmatch – across a whopping 20 levels with 7 different weapons and two grenade types. It boasts cutting edge graphics and a console-style experience, smooth gameplay, Game Centre support, and a streamlined matchmaking lobby that make Archetype one of the best online shooters in the App Store.

Similar to Archetype, Eliminate Pro is dedicated to online multiplayer, and was the first online FPS in the App Store. It’s completely free to download and play, but uses a credit system that enables your to purchase new gear, weapons, armor rigs and characteristics. You can earn credits based on performance, or buy them through in-app purchases. The goal of Eliminate is to put the most advanced weapons to the test against real players all over the world in fast, fluid team deathmatch. Master multiple combat arenas; work your way to the top by levelling up and upgrading your weapons and armor; use jet packs, berserker shields, cloaking devices, and other cunning power-ups to outsmart your enemy; and track your progress with the build-in Plus+ gaming network.

Call of Duty: Zombies is unlike any of the other FPS games in our app list – it brings the classic World at War zombie-slaying game to iOS in which you must survive wave after wave of attacking zombies. Try to defeat the undead alone or team up in 4-player co-op with friends via Wi-Fi/online and Bluetooth. All 4 zombie maps from World at War have been fully optimized for iOS, with smooth 3D environments and a range of different weapons. Zombies features 3 different control systems and a huge list of unique achievements.

Doom features the original three episodes, as well as episode four – Thy Flesh Consumed – of the legendary Doom classic, over 36 levels of non-stop carnage and action. As a space marine stationed on the planet Mars, you are all that stands between the armies of Hell and their invasion of planet Earth. Wield unforgettable weapons like the chainsaw and the BFG 9000 while fighting off notorious monsters, such as the Imp, Cacodemon, and Hell Knight. There’s also a mutiplayer mode for wireless battles with up to 4 players in deathmatch mode, or you can work together to cooperatively fight back against the demons of Hell.

If you’ve got a favorite first-person shooter for iOS that we might have missed, let us know about it in the comments. We’ll check out any suggestions and add them to our list if we think they’re part of the App Store’s finest!