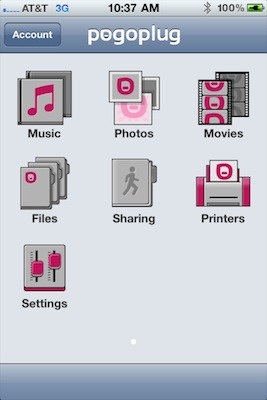 We’ve been keen followers of developments at CloudEngines, the outfit behind the Pogoplug network-attached storage device, ever since we reviewed the first one back in late 2009. This month, a little over two years after the Pogoplug debuted, brings a whole raft of new offerings from the company — including one that may bring a big surge to NAS popularity in general.

Of the three new items, the biggest news is the $200 Pogoplug Video, which shipped last week and is already shelves at select Best Buys. If you’ve been following our posts about Pogoplug, our biggest complaint has been its lack of ability to stream video files that aren’t web-friendly to iDevices — primarily because the Pogoplug hardware lacked the processing oomph to transcode video on-the-fly to a suitable format. But with new hardware’s processor boost (and accompanying software upgrades — see below) should suddenly make video streaming from the ‘Plug virtually hassle-free. It’s a pretty big deal: now, presumably even your technologically-allergic Uncle Shmellenbop should be able to watch movies streamed over the Internet from a ‘Plug sitting at home (or wherever).

Right now, as far as we can tell, Pogoplug has the only widely available, consumer-oriented, plug-n-play hardware able to this — but if it proves popular, it’s sure to spawn rivals.

Also, Pogoplug will soon be offering two flavors of a stand-alone software product, presumably to compete with the likes of Tonido, et. al. who seem to have jumped ahead of the pink-clad outfit recently in the realm of software solutions. The Premium option is pay-to-play and will let users use all the Pogoplug service features from their own computers; the free version will do everything except stream video.

Finally, the refresh of the Pogoplug web interface and iPhone app is the least significant update — but everything certainly looks tidier. Pogoplug says their also working on an update for the iPad version of the app, which should add to the appeal of the Pogoplug Video.