It’s far, far slower than Apple’s recent models and even much slower than the two-year old iPhone 7. 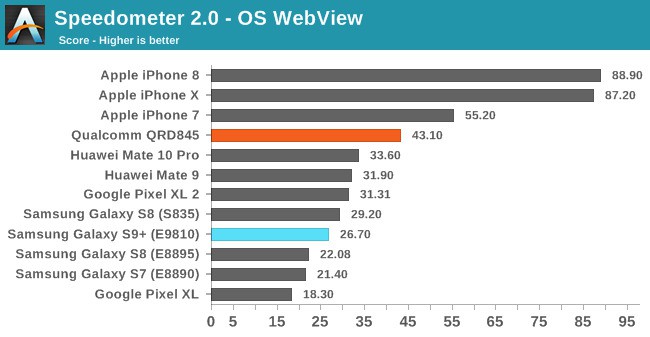 Samsung’s upcoming phone uses this company’s new Exynos 9810 processor which isn’t shaping up to be very quick. In the GeekBench 4 Single Core test, both its integer and floating point scores came out well behind the Apple A11 chip used in the iPhone X, 8, and 8 Plus. The S9’s processor also came out second best to the iPhone 7 and 7 Plus’ A10 chip in its integer score, if not in floating point performance.

A caveat for this data is that these tests were performed on a pre-release Samsung Galaxy S9 on display at the Mobile World Congress trade show, and it’s possible Samsung will be able to improve the performance of the device before it goes on sale. That said, the March 16 launch date is only a couple weeks away, which doesn’t leave much time for tweaking.