iPhone 7 users can finally enjoy uninterrupted audio through the Lightning port, now that Apple has released an iOS 10 update full of bug fixes.

iOS 10.0.2 was made available to all iPhone and iPad owners today, fixing issues with audio, photos and app extensions. 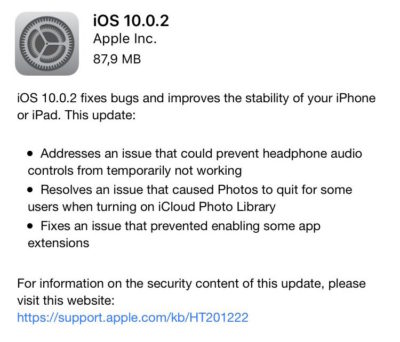 Shortly after the launch of the iPhone 7 and iPhone 7 Plus, owners started complaining that the Lightning EarPod’s volume control would stop working sometimes. The glitch made it impossible for users to activate Siri, answer phone calls or adjust volume.

Before the release of iOS 10.0.2, the only way to fix the bug was to unplug the EarPods and then plug them back in. Not all devices were affected, but it looks like Apple finally found the fix it promised earlier this week.

Some iPhone users have complained that iOS 10 drains their battery much quicker than iOS 9. The release notes for iOS 10.0.2 don’t mention any battery efficiency improvements, but we’ll see if we notice anything once we get it installed.

iPhone and iPad owners can download iOS 10.0.2 via and over-the-air update. Go to Settings >> General >> Software Update to download and install the new software directly to your device. You can also install it via iTunes.