Apple’s sent out the invite to its March 21 event, and it’s making everyone crazy. The message contains a single image (one version of which is pictured above) and a message: “Let us loop you in.”

The Internet has been trying to figure out what it all means since it went out.

And some of its guesses are … well, we’ll just say “interesting.” But others might be on to something.

Tech Insider editor Dave Smith makes a few funny suggestions, including that The Loop co-founder Jim Dalrymple will take over the top spot at Apple. We wouldn’t hold our breath for that one, but we can imagine a keynote that has Apple claiming to have revolutionized the circle.

And yes, I did intend that pun.

My guess is "loop you in" means Apple is finally making headphones that don't get tangled. That would be truly revolutionary.

Daily Dot writer Selena Larson makes a solid suggestion that is just too wonderful to be true. Everyone knows it’s impossible to keep headphone cables from tangling, and Apple’s EarPods, with their super-soft cords, seem more prone to knots than most. In fact, if I ever own a boat, I’ll skip the mooring ropes when I dock. I’ll just toss a set of EarPods at the thing and let nature take its course.

The vagueness isn’t without some fear, however. Flixel‘s Mark Pavlidis (jokingly) foresees a nightmare scenario in which Apple’s Live Photos gain new functionality that “Sherlock” his own company’s offering, Cinemagraphs.

“Sherlocking” is a term that describes Apple making another company’s product obsolete by incorporating its features into its own systems. The name comes from the searching utility that premiered in OS 8; it had many of the same features as Watson, a third-party app from developer Karelia Software. Flixel’s Cinemagraphs let you loop part or all of a quick HD video, and if an update to the iPhone’s onboard Live Photos function includes these features, it might be bad news for the company.

Finally, Twitter user JakeRenton98 posted the above, in-depth analysis of the invite image, which makes many startling conclusions. His analysis includes confirmations of a 4-inch screen on the iPhone 5se based on the four colors present in the image, a spoiler that Apple’s senior vice president of internet software and services will wear beige at the event, and an Apple Music-exclusive Star Wars film starring Obi-Wan Kenobi.

And you heard it here third or possibly fourth, depending on how active you are on Twitter. That thing has like 134 retweets so far.

But what does it really mean? We aren’t without our own guesses. Here’s another look at the invite: 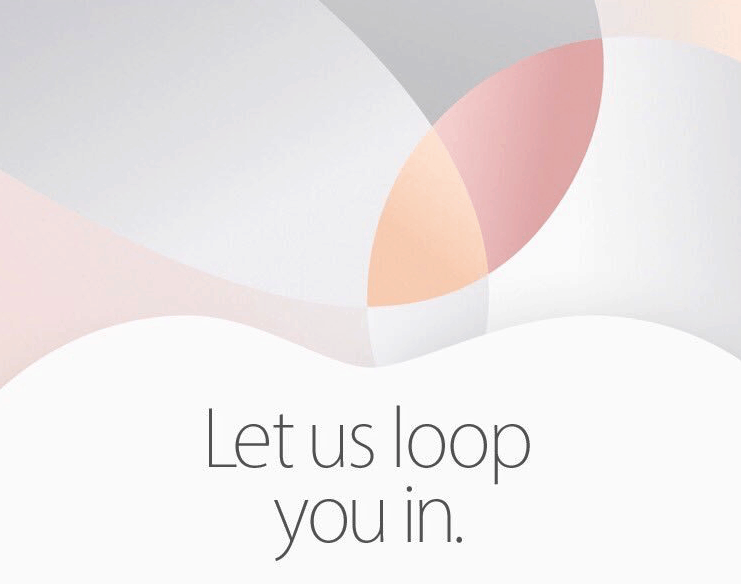 We know Apple’s going to be talking about a new 4-inch iPhone, probably called the iPhone SE. The colors in the image seem to point to the styles we’re going to get in the new device; they closely resemble the standard-issue silver, space gray, gold and rose gold options currently available for other iPhone models. But the picture has a fifth color that might point to a lighter pink. Or it might just be there to make the invitation look cool. We’re not ruling anything out.

The “loop” in the text could mean a lot of things, but we guess it has to do with new Apple Watch bands, like a sure-to-be-slick black option for the metal Milanese Loop. It could also be a reference to 1 Infinite Loop, the current address of Apple’s campus, but we’re not sure what on earth that could mean since the upcoming Apple Campus 2 is still under construction, and its address is currently 19111 Pruneridge Avenue.

We assume Apple will change that when the campus opens, though, because nobody wants to associate the company with prunes. Maybe at the keynote, they’ll tell us it’ll be 2 Infinite Loop or something. Why not?

But we basically don’t have a lot to go on here; the invite is intentionally vague. And when we aren’t sure about something, we do what most Apple users do: We ask Siri. It (kinda) worked for the last Apple briefing.

This time, however, Siri is no help at all. Here’s what we could get out of the digital assistant when we asked about the Apple March 21 event.

Apparently, we’ll just have to wait a couple weeks like everyone else.