Apple is stil the top smartphone maker in the U.S. according to the latest quarterly report from comScore. While HTC, Motorola, and LTG continued to lose marketshare in the U.S. over the last three months, Apple and Samsung have continued to outpace the competition.

As of May 2013, comScore found that the iPhone now accounts for 39.2% of the U.S. smartphone marketshare. Even though Apple has the lead in hardware, Android is still the top ranking smartphone platform in the U.S. with 52.4 percent market share.

Here’s how Apple stacks up against the competition:

“141 million people in the U.S. owned smartphones (59 percent mobile market penetration) during the three months ending in May, up 6 percent since February. Apple ranked as the top OEM with 39.2 percent of U.S. smartphone subscribers (up 0.3 percentage points from February). Samsung ranked second with 23 percent market share (up 1.7 percentage points), followed by HTC with 8.7 percent, Motorola with 7.8 percent and LG with 6.7 percent.” 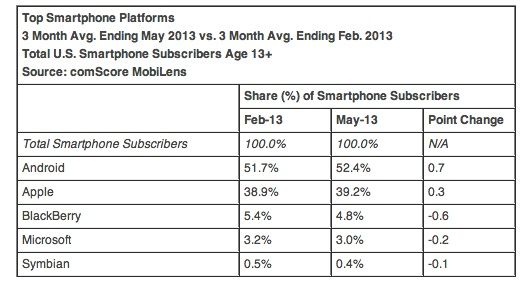