Google sent out invites to certain publications this morning for a mysterious Maps event that will be taking place on Wednesday, June 6th. With the plea to come see the “next dimension of Google Maps,” the company plans to show a “sneak peek” at upcoming features for its mapping technology.

Sure, the event sounds interesting, but the fact that Apple’s Worldwide Developers Conference is taking place 5 days later really adds fuel to the fire.

It’s by no means a coincidence that Google has suddenly scheduled a Maps event less than a week before Apple will divorce itself from Google Maps altogether in iOS 6. The general consensus is that Apple will debut its own Maps application for iOS at WWDC during the week of June 11th, and the app’s backend will be made entirely of Apple’s own secret sauce. The magic will be made with the help of the three mapping companies Apple has gobbled up over the last few years: PlaceBase, Poly 9, and C3.

More specifically, Apple is expected to unveil revolutionary 3D mapping technology in its new Maps app. Instead of looking at the roof of a building, you would be able to look around it in 3D space, Minority Report style. Awesome, right?

While mobile 3D mapping will probably be more of a gimmick than anything useful at first, it’s definitely the future. When you’ve got 2D already, you move to 3D. That’s what the movie industry is experimenting with, and 3D is the next wave of iteration for mapping technology. And you better believe that Google has been working on this too, especially considering that Google Maps has pioneered some much innovation in this space already.

Here’s the press invite the search giant sent out this morning:

At this invitation-only press gathering, Brian McClendon, VP of Google Maps and Google Earth, will give you a behind-the-scenes look at Google Maps and share our vision. We’ll also demo some of the newest technology and provide a sneak peek at upcoming features that will help people get where they want to go – both physically and virtually. We hope to see you there.

That combined with the tagline “next dimension” all but confirms 3D mapping. Apple is expected to debut the same thing 5 days later. Google is trying to keep itself relevant in the news cycle before WWDC happens and Apple completely steals the show.

Apple has partnered with Google in the Maps app since the original iPhone in 2007, but ever since Steve Jobs declared “thermonuclear war” on Android, the two companies have continued to be at odds with one another. While it’s true that Google is still the default — and will probably remain the default — search engine in Mobile Safari, you better believe that Apple will do whatever it can to create space between itself and Google. There’s too much bad blood. 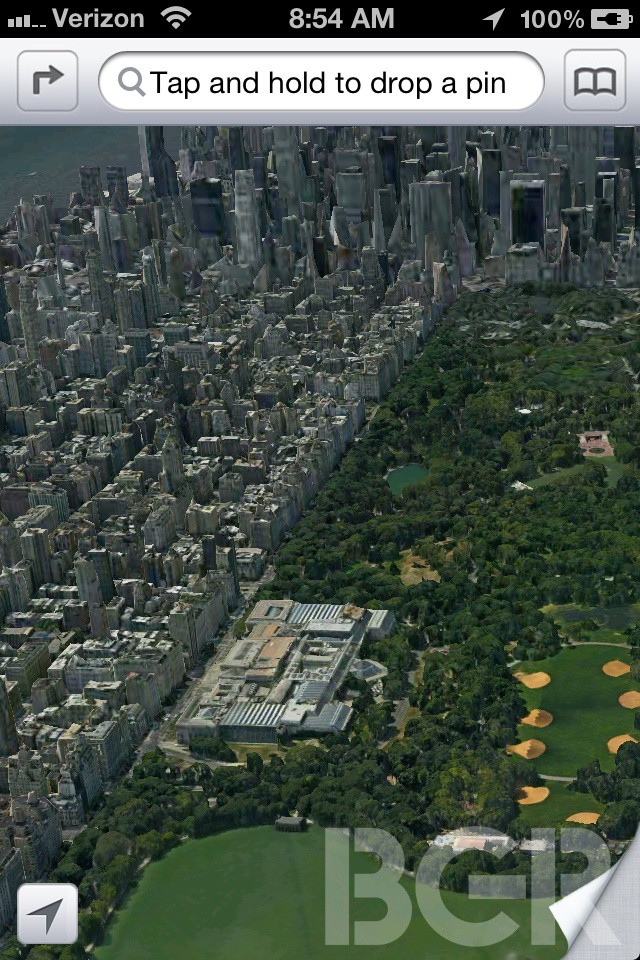 So yes, Google will get to show off its 3D mapping first. But the key here is show off, not launch. It’s a “sneak peek,” not product release. When Apple announces its new Maps app, developers will be able to get their hands on it right away. And consumers will probably still get iOS 6 before Google gets whatever it has cooking off the ground.

Whenever Apple holds a media event the news cycle becomes completely engulfed with whatever the Cupertino company shows off. Heck, invites to Apple events eclipse the tech news cycle for the day. Apple sent out its March iPad event invites during Google CEO Eric Schmidt’s keynote at Mobile World Congress a couple months ago. All of a sudden the room full of bloggers starting thinking, tweeting and writing about Apple during Google’s presentation.

Google didn’t schedule its Maps event during WWDC because it knows it wouldn’t stand a chance against whatever Apple pulls back the curtain on. Holding the event after would look like a sad attempt to piggyback off Apple’s announcement. 5 days before will have to do.

And so the dance continues.