I love playing games on my iPad, but I hate playing games with on-screen joysticks. Your finger drifts away from where it’s supposed to be, and you end up flailing around at a crucial moment. If only there was a way to put an actual, physical thumb pad on your iPad’s screen?

Of course, there is. It’s called the Fling, and was debuted some time ago by Ten One Design. I recently picked up the European version, which is the same thing only it’s sold by Targus, and comes in ugly packaging. I have been putting it through its paces in Grand Theft Auto III, Streetfighter 2 and others. How does it do?

The stick sticks onto the iPad’s screen using a pair of suction cups, and a conductive plastic knob is held in the center of the circular body by a clear plastic spiral. The knob is a substitute for your finger, and transfers your special life-force to the screen, where the iPad recognizes it as you. The spiral lets you move easily in any direction, and springs the knob back to the center when you let go.

In some games, the controller is great. It increases the accuracy of your play, and you always know where your thumb is in relation to the on-screen stick.

In Grand Theft Auto III, I found that the accuracy increased so much that I actually switched on analog steering control for cars rather than the left-right-tap-to-steer controls I had gotten used to. It makes a big difference.

If it would only stay in place, the controller would be a plausible alternative to the D-pad on regular game controllers.

The problem is, that’s a big “if.” The controller will slide slowly away from its position over time. This isn’t such a big deal as it happens slowly and is somewhat predictable, so you can pause the game to reset the position, or just do it between rounds, or missions, or plays or whatever.

The bigger problem is that the suction cups can sometimes fail catastrophically at the worst possible time. To explain, here’s an example.

I had been trying to complete a mission in GTA over and over. It’s the one where you need to steal three different cars and deliver them all in perfect condition, with nary a scratch. Of course, there’s a time limit, so you have to drive like a madman but without damaging the cars.

Like I said, I had been trying this one over and over, and then I finally cracked it. I was on the last car, tearing towards the parking garage where I had to deliver it. I was on a straight stretch, and then I hit a corner. Hard. And guess what happened? One of the little suckers failed me, and the stick shifted off to the side. I crashed. Worse, the second sucker was still stuck fast, so I couldn’t just keep playing with my bare fingers.

I failed the mission again.

The other point of concern is the clickety-clicking noise as you tap-tap-tap the knob onto the screen. It doesn’t appear to damage the screen, but it sure is worrying.

I actually bought this for myself, and I would probably do it again. Sure, the thing can ruin a game for you, but then again, maybe you wouldn’t have gotten to the point you’re at without using this little stick?

The bottom line? The nubbin costs just $20, so if you’re an enthusiastic iPad gamer, you should probably check it out. 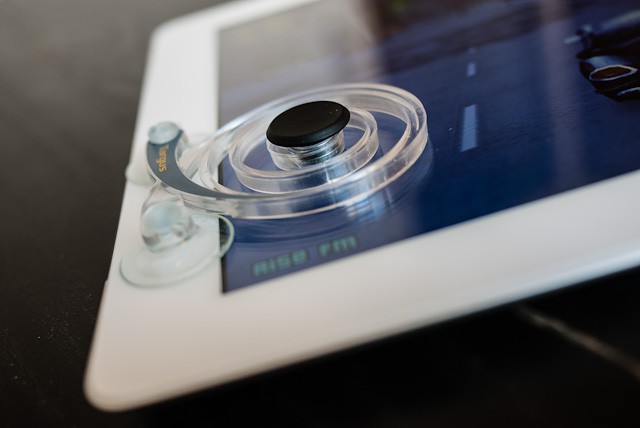