Following the release of the seventh-generation iPod nano earlier this week, iFixit performed its customary teardown to discover that Apple isn’t just producing its own processors for the iPhone, iPod touch and the iPad — but also the iPod nano, too.

Apple has been producing its own ARM processors for iOS devices since last year, when the A4 processor debuted in the first iPad. Earlier this year, the company introduced its dual-core A5 chip with the iPad 2, which also featured in the upcoming iPhone 4S.

However, it seems the company has also turned its hand to making its own processors for the iPod nano. iFixit’s teardown of the latest device revealed a repackaged Samsung stacked package-on-package chip, which carries an ARM application processor and 512 Mbits (64MB) of mobile DDR DSRAM. 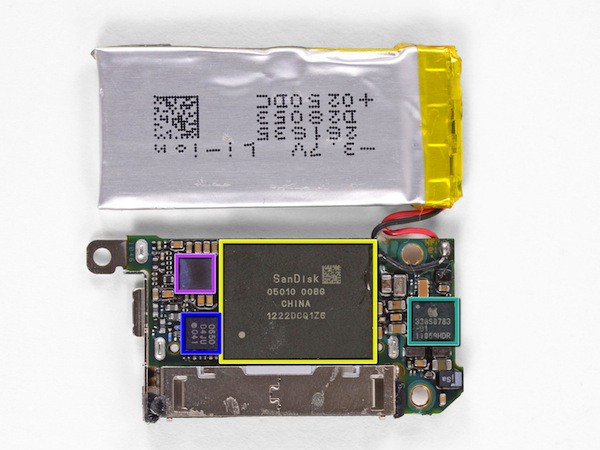 You’ll also notice in that picture that Apple has chosen to use SanDisk flash memory modules for this year’s iPod nano. The previous-generation device used flash modules made by Toshiba.

Other than these two changes, the new iPod nano’s internals are largely the same, with the same 240 x 240 display, and an identical logic board and chipset.

Update: It seems Apple this isn’t the first time Apple has created its own chip for the iPod nano — they also featured in the last generation. Thanks, Christian!