Apple will be building a massive store in New York’s Grand Central Terminal, we have independently confirmed.

The store will open in the fall, likely early September — and it will be Apple’s largest retail space in the world.

The store already has a name: Apple Store, Grand Central, according to a source close the company. The source said Apple will be making an internal announcement within the next month or so.

“The company will certainly pull out all the stops on this one,” said the source, who asked not to be named.

This year is the 10th anniversary of Apple retail, and Apple wants to make a big splash, our source said. Apple’s retail operation has been a spectacular success, helping fuel the company’s explosive growth and creating shops that make twice as much money as Tiffany & Co.

Reports that Apple was looking at the New York landmark first appeared last week in The New York Observer and IFOAppleStore.com. Both publications said Apple was “evaluating” Grand Central but hadn’t started the long and complex approval process, which is overseen by New York’s bureaucratic MTA.

The Apple Store, Grand Central, will be the largest in the world. It will be bigger than the Apple Store in Covent Garden, London, currently Apple’s largest retail location. The Covent Garden store is about 40,000 square feet over four stories, but only 16,372 square feet is public, according to IFOAppleStore.

It’s unclear where Apple will find more than 16,000 square feet inside Grand Central.

The terminal is home to more than 100 retail locations, spread across three levels and 130,000 square feet. Most average between 1,000 and 6,000 square feet. One of the largest stores is Rite Aid at 10,000 square feet, followed by Kenneth Cole, which has about 8,500 square feet next to the iconic Vanderbilt Hall. Here’s the leasing plan (pdf).

The Observer said Apple isn’t expected to take one of the traditional retail spaces, but will locate right in the terminal.

Our source suggested that Apple may be taking walls down — but didn’t elaborate.

The terminal sees more than 700,000 visitors a day, most heading for trains or subway. But about 250,000 come to look at Vanderbilt Hall or eat at the 35 restaurants, including the historic Oyster Bar on the lower level.

Apple already operates four super-popular stores in Manhattan. The largest is the spectacular glass-fronted store on the Upper West Side. The busiest is the famous glass cube on Fifth Avenue. The Fifth Ave. store is only a mile away from Grand Central. In fact, the mad crowds at Fifth Ave. is the reason Apple wants another store so close, to take the pressure off, according IFOAppleStore. 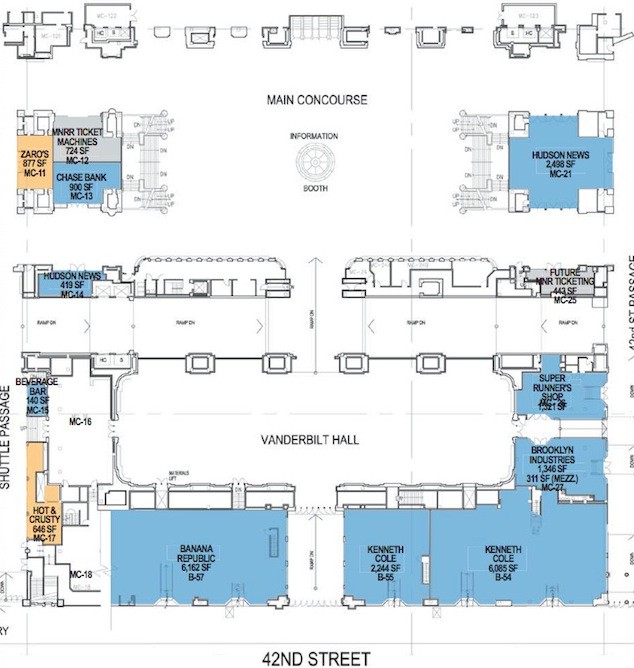