Over the past 20 years, Apple’s Safari web browser grew from a speedy young upstart to a polished professional. Released on this day in 2003 as a free download, Safari has been bundled with every version of the Mac operating system since.

Take a trip down memory lane as we look at how Safari has evolved over the years.

Like any Apple product that survives more than one generation, the look of Safari has morphed over time. Both the browser’s design and its features changed as Cupertino strived to make Safari the best it could be. And, as with so many Apple products, the browser that started out fast but buggy evolved over the next two decades into something beautiful and reliable.

Perhaps surprisingly, our saga doesn’t start with Safari itself … 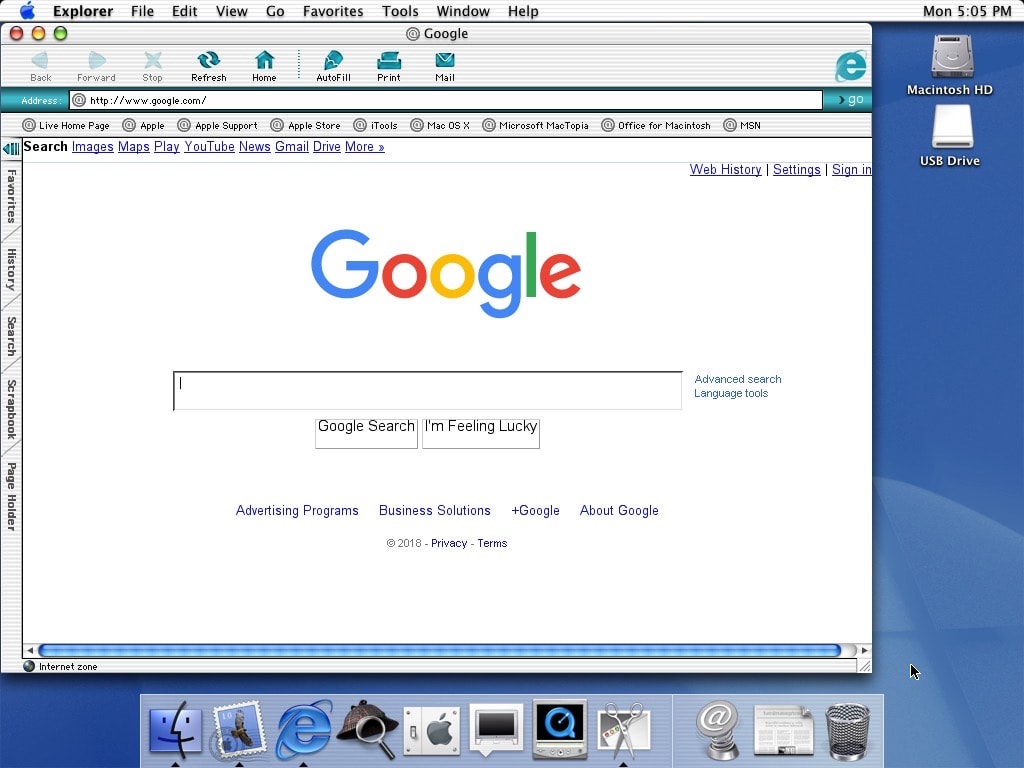 No, our story actually begins with Internet Explorer, the browser that first shipped with Mac OS 8.1 in 1997. This was a controversial shift away from Netscape, which had been the default for a few years prior.

Everyone knew the internet was going to be big. Apple would later center the iMac’s marketing on it being a great, easy-to-use computer for the internet. The partnership with Microsoft, which landed Internet Explorer on Macs, kept Apple afloat and helped it ride the internet wave.

But by 2003, Apple had got its feet on the ground. Cupertino no longer needed Bill Gates’ money.

Safari 1: A new kind of browser 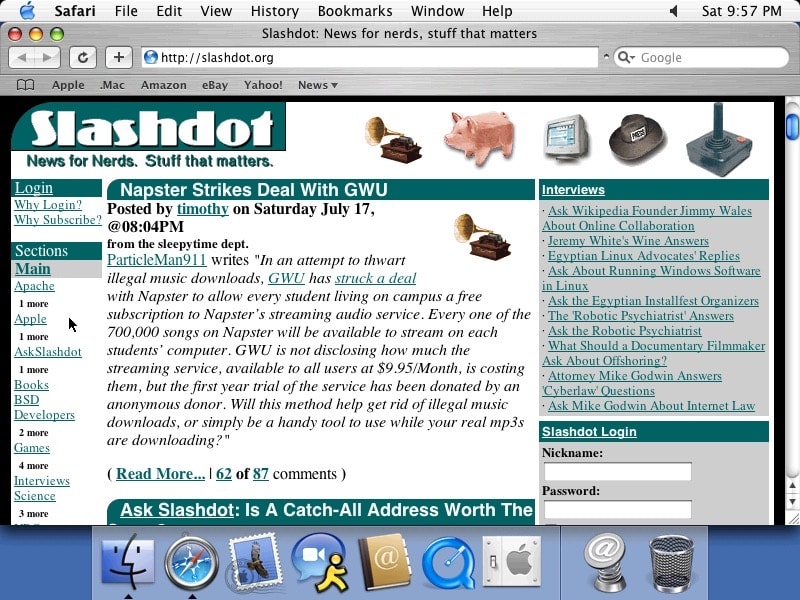 Steve Jobs unveiled Safari at Macworld San Francisco in 2003. Watch the introduction, and you will see people cheering and applauding Safari for taking only 16 seconds to load a web page.

The biggest selling point was the simple fact that it was an internet browser designed by Apple. Its dead-simple user interface looks shockingly modern to this day. It clearly wasn’t designed for Windows and grafted over; it was designed first and foremost for Mac OS X.

Safari 2 and 3: Made for the wide world of blogging 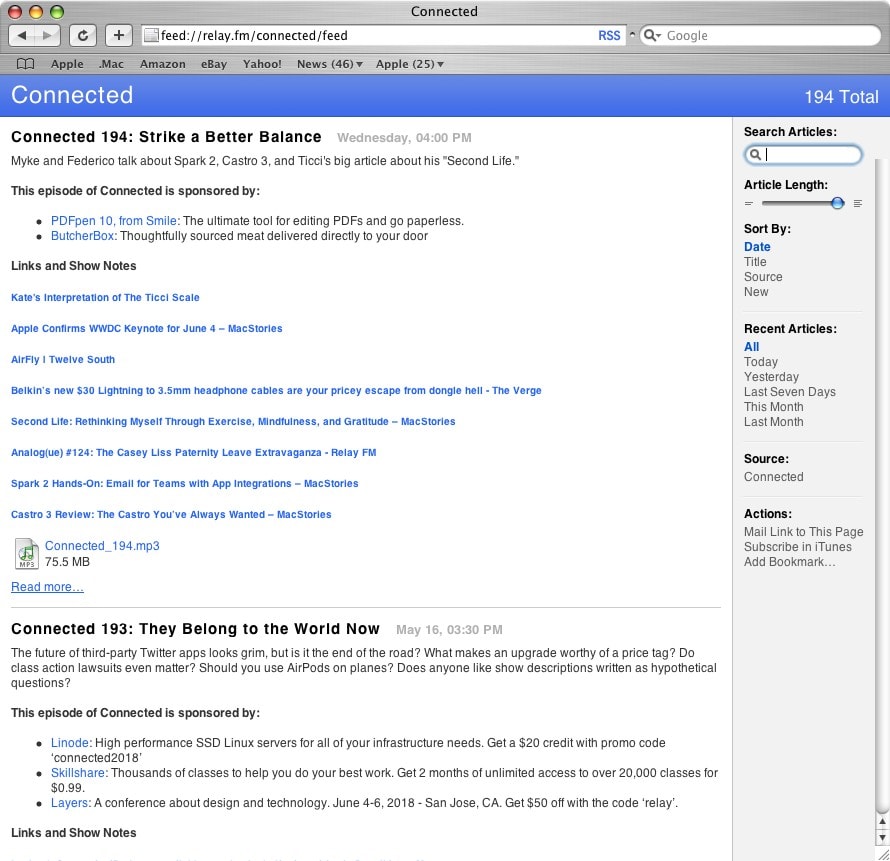 Safari 2 added a big feature for the golden age of independent blogging: RSS. Visit your favorite internet blog, click the RSS button in the address bar, and you enter what looks a bit like Reader Mode.

Safari 3 brought tabbed browsing to the Mac, catching up with competitors Firefox and OmniWeb.

The Safari 4 beta controversially moved the tab bar to the top of the browser window. People complained that it was hard to distinguish between clicking and moving around the window versus reordering tabs, and that the lack of a proper title bar broke Mac conventions.

Apple reversed this design and never made any controversial choices regarding the tab bar ever again until the next time it did.

An iOS version for iPhones 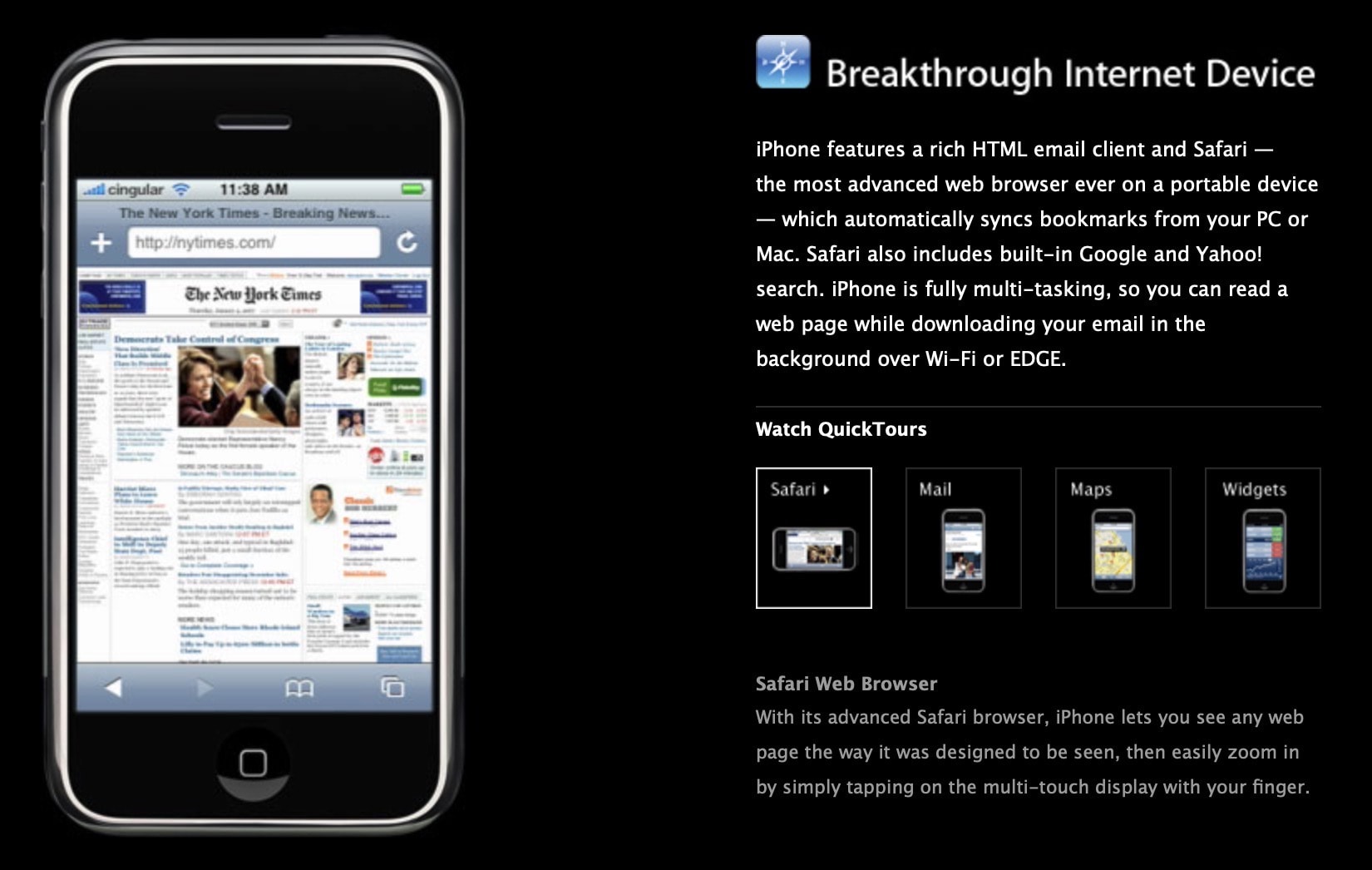 The biggest innovation to Safari since its introduction was shrinking it down to run on the original iPhone. This was a heck of a feat.

Before the iPhone arrived in 2007, cellphones technically had web browsers in much the same way an airplane can technically drive on a road. They were tiny, they were slow, and most of them were entirely text-based. Keep in mind an Apple Watch has a bigger screen than a lot of cellphones from the mid-2000s.

With Safari on iPhone, running the full, desktop-capable web on a smartphone was kind of a big deal. The internet was no longer a place in your house you sat down to use. You can watch Jobs show it off here.

A safari to the far-off lands of … the PC?

Then, an even crazier thing happened: Safari came to Windows XP and Vista. This short-lived experiment lasted from 2008 to 2012, ending with the release of Safari 6.

Safari joined iTunes as Apple’s second major app (or as they say on the PC, the second major program) for Windows. But obviously, people didn’t take to it. iTunes lives on to this day, and Microsoft has even announced that Apple is working on brand-new Music and TV apps for the PC platform.

A fresh coat of paint glass 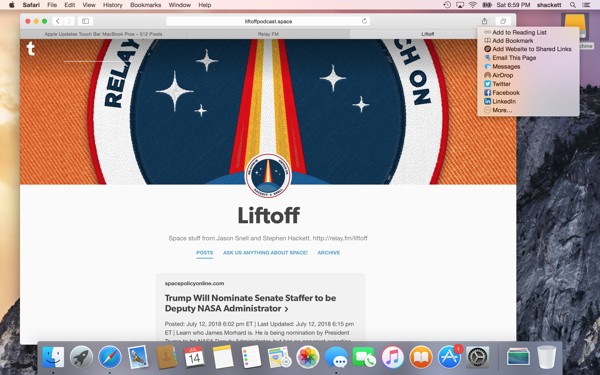 Safari got its biggest visual shakeup alongside the rest of OS X Yosemite in 2014. The fresh coat of paint brightened the look of the Mac. The new design rolled the title bar and toolbar together to make for a slimmer UI.

Safari was one of many apps for OS X and iOS to introduce Continuity, a handy set of features for seamlessly switching between your Mac and your iPhone. When you approach your Mac with your phone in hand (and Safari open), you’ll see an extra Safari icon in the Dock on your Mac. Click it, and you’ll be taken to the same page you had open. I still use this feature nearly every day.

In the mid-2010s, as people became more concerned about data privacy on the internet, Safari added some privacy-conscious features. Intelligent Tracking Prevention puts strict limits on cookies to keep data miners from following your activity across the web. Automatic Strong Passwords generates unique, complicated passwords for each online account you create in the browser, syncing with all your devices over iCloud Keychain.

Apple introduced Sign In With Apple and Apple Pay on the Web more than three years ago to a mild splash of excitement, but over time they have become essential features for many users.

One interface forward, two steps back 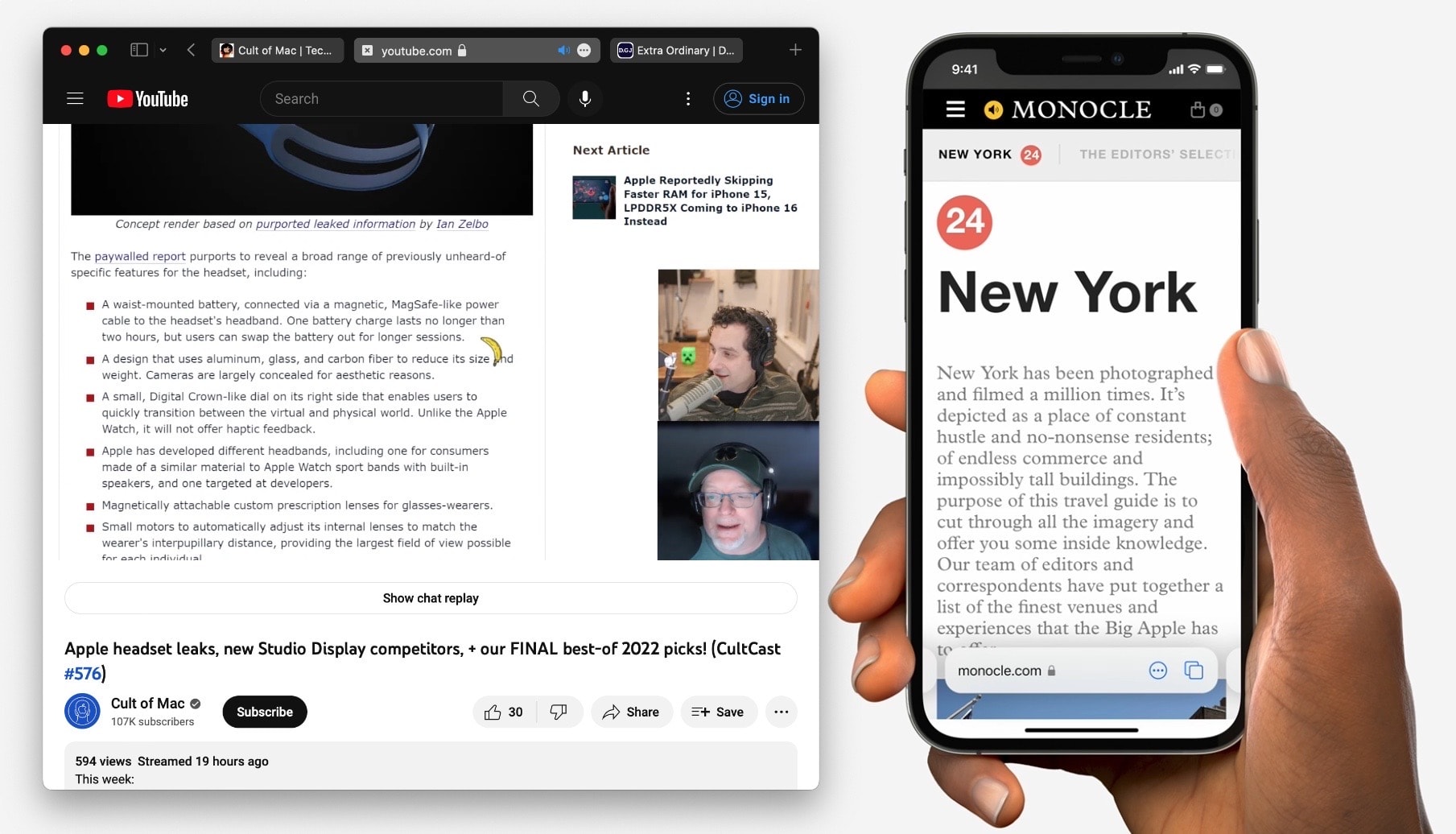 Apple completely redesigned Safari in 2021, delivering a more universal look across the Mac, iPhone and iPad. The minimal, all-in-one navigation bar blended into the website you visited and tucked away all the controls.

Boy, were people angry. People don’t want the same exact interface on the Mac as they do on the iPhone — they’re completely different devices.

Apple slowly walked back the design, piece by piece, over the months between June and September, but you can still enable the abandoned unified tab bar design in Safari Preferences.

Smarter features for the future of the web

Throughout Safari’s two-decade history, Apple consistently stuck to one simple philosophy while engineering its browser: It’s never allowed to get slower. Every new feature, every change, needs to make Safari faster. Slower is simply unacceptable.

Plus, Safari gets smarter every year. It’s been my browser of choice ever since I’ve had a Mac. So, happy birthday, Safari. Here’s to the next 20.