Soon there could be new emoji that let you show you are melting, have a low battery or are feeling ambivalent or teary-eyed. These and more are on the list for approval in Emoji 14.0. But they might not appear in iPhones and other devices until 2022.

The list of possible fresh emoji includes a saluting face, heart hands, a troll, a bird nest, bubbles and many more, according to Emojipedia. Plus, emoji fans would get more inclusivity options, including additional skin tones for handshakes and pregnant man.

It’s not guaranteed that any of these proposals will be added to the list of approved emoji. But most of them probably will.

“In past years, the majority of draft emoji candidates end up included on the final list,” said Jeremy Burge from Emojipedia. 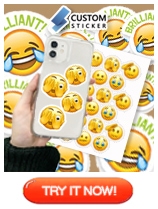 Emojis are our ever-faithful companions on this digital journey. How to bring them into real life? Try turning these fun emoji stickers into real peel-and-stick stickers. You can express your feelings in daily life with the ease of emoji stickers! When Amazon can’t offer the latest Emoji stickers, CustomSticker.com will help you. You can even add your own creations, texts to the emoji sticker pack, and determine its size. With custom die-cut stickers, you can spread emoji fun beyond your laptop, iPhone, iPad, charger, and power bank. It’s a good idea to merchandise your own designed emojis, which is a profitable small business, you can also give a page of creative stickers it to your friend and fans for free to strengthen their support.
This post is brought to you by Custom Sticker.

Adding new emoji is more complex than you realize

The approval process for emoji is complex because devices don’t send pictures to each other — they send Unicode numbers. It’s up to the device to turn the number into a picture. So the sender and receiver must agree on what those Unicode numbers represent.

The Unicode Consortium coordinates the process. And the group is scheduled to announce Unicode 14.0 and release Emoji 14.0 on September 14.

That’s likely too late for any of these additions to be in Apple’s upcoming iOS 15, macOS Monterey, etc., as these operating system upgrades are expected to launch at about that same time.

Still, it’s possible these changes could be included in Apple’s operating system updates before the end of 2021. However, 2022 seems more likely. Apple must take the recommended emoji designs and “tune” them to fit its own look. The same is true for Google and the makers of other applications. The last emoji additions came in iOS 14.5.