The makers of superb 2014 game Leo’s Fortune are back with a new action platform game for iOS. Trading Leo for a cartoony world based on Norse mythology, Viking-themed platformer Oddmar lands in the App Store today.

Can this new iOS platformer repeat the success of its spiritual predecessor?

When it landed in the App Store back in 2014, Leo’s Fortune quickly became one of my favorite games of the year. Your goal was to guide a moustachio’d monster through a series of levels to win back your purloined fortune. Somehow that oddball concept became a beautifully charming game.

Jump forward the best part of four years, and the team behind Leo’s Fortune is back. In Oddmar, you guide the titular Viking through 24 levels to prove yourself worthy of Valhalla, the Asgardian hall ruled over by the god Odin. 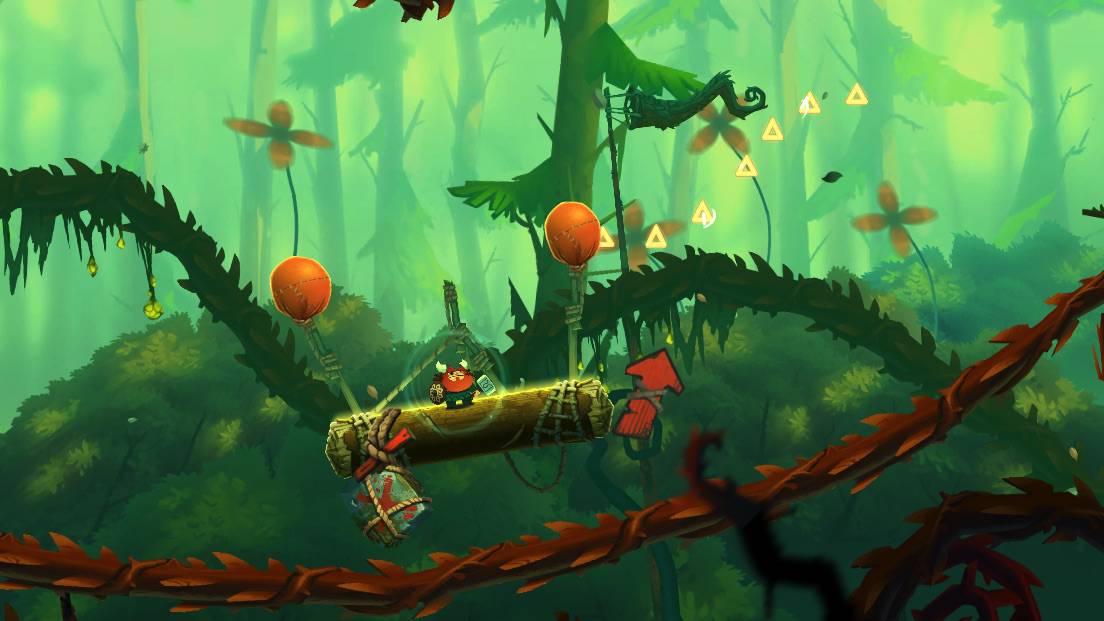 While the Norse setting is certainly novel, the game structure will be familiar to anyone who has ever played a Super Mario game. It’s a series of one-off levels, joined together on a map screen that spans a variety of different worlds.

In each level, you contend with assorted baddies, jump over spikes, collect coin equivalents, and solve puzzles that typically involve moving something, climbing on something, or mastering the timing on something.

Fail to do any of these things correctly and you shoot back to the beginning of the level — or at least to the previous checkpoint.

In other words, reinventing the wheel this isn’t!

But, then again, when the wheel works as well as it does, why try and reinvent it? Oddmar’s success doesn’t rely on bold new ideas, so much as how well it remixes and executes theses existing pieces. I’m happy to report that it does this marvelously.

The levels in Oddmar are appropriately varied. They span settings ranging from magical forests to snow-capped mountains to treacherous mines. No two levels look alike, and you’ll never find yourself bored.

The game boasts both touch controls and support from MFi controllers. The touch controls work as well as they can. Swiping the bottom left side of the screen moves you left and right, while the right side of the screen controls jumping and slashing away at obstacles or enemies with your magical weapons. Movement is responsive and forgiving enough that you’re not likely to shatter your fancy iPhone X in frustration after hurling it across the room.

Given the choice, though, you’re best off playing on an iPad Pro with a control pad. The reason? Aside from the fact that touch controls never offer the physicality of a proper controller, you want to see this game as clearly as possible.

Covering up one-third of the screen with your unsightly thumbs is like sticking a “toilets this way” sign on one of the paintings in the Louvre. Oddmar might be the most beautiful iOS game I’ve ever seen. Leo’s Fortune set a high benchmark, but its landscapes look positively desolate by comparison.

Oddmar looks like a Disney cartoon brought to life. The multiplane backgrounds burst with detail, as shafts of light filter through gently swaying trees, particulates float on summer breezes, and dragonflies dance across ponds. And that’s just in the early levels.

In between stages, you enjoy motion comic-style cutscenes reminiscent of those in games like The Witcher 3 or Mortal Kombat X. Add in some beautifully epic music, and the result is a veritable feast for the senses. You definitely will want to enjoy this game on as big a screen as you possibly can.

I thoroughly enjoyed Oddmar. It’s not the longest game out there, but it’s an absolute gem. This is destined to be one of my favorite games of the year. And if it’s not, boy, does that bode well for the games that’ll beat it later in 2018!