If you like to pretend you’re in a private detective movie, recording yourself with voice-memos as you go about your everyday business, then your app choice is obvious: Voice Memos from Apple. It’s built into your iPhone, it’s simple, quick to use, and rock solid. But if you’re a musician, and you want to quickly capture ideas, the choice is more complicated. Let’s take a look at the best iOS apps for recording music memos.

What to look for in a music memos app 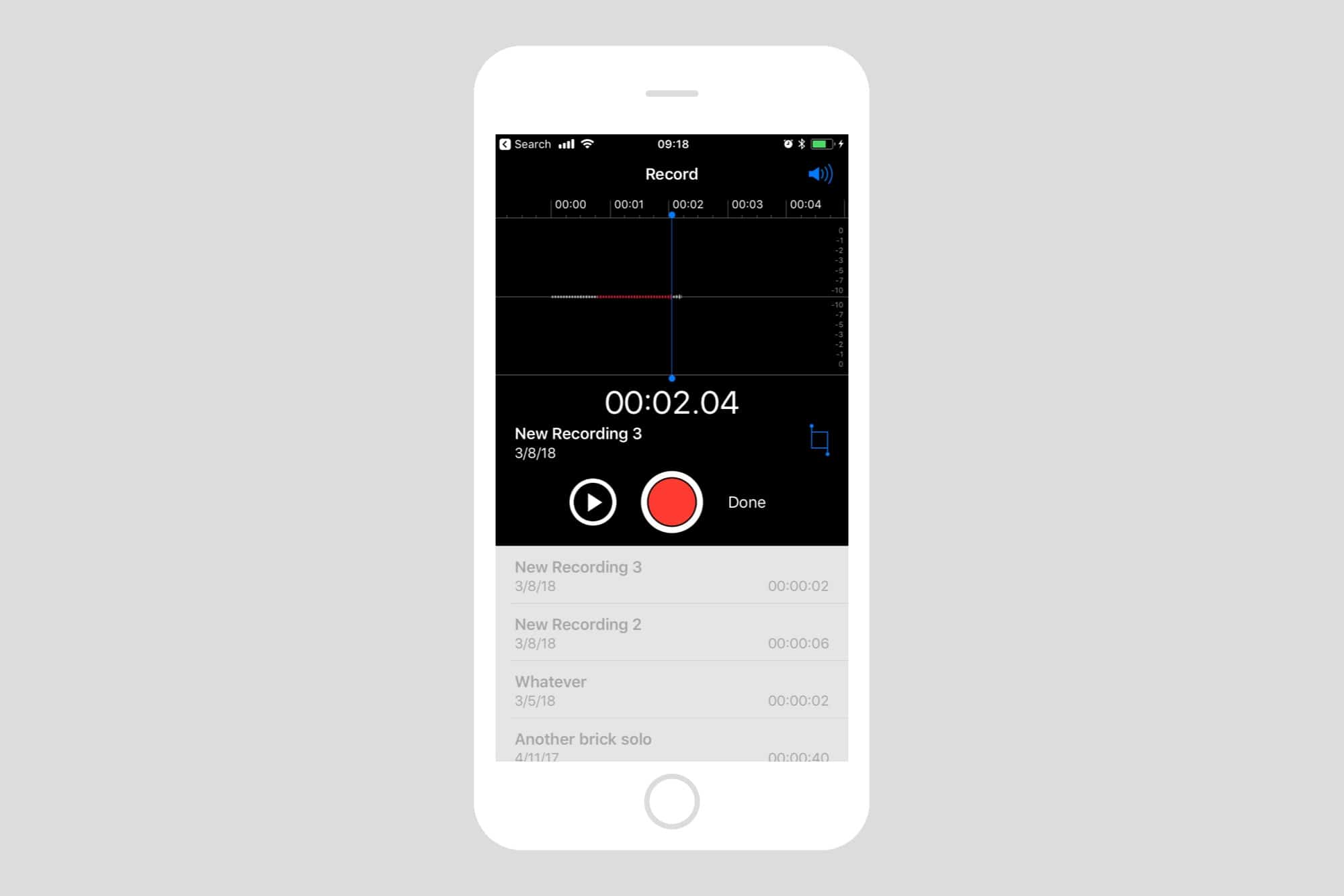 Voice Memos is still the app to beat.

Voice Memos is a model app for the first point. Not only is the big red record button ready to go in all views, but the app also launches fast. After that, though, things start to fall apart. In order to play back a clip, you have to tap it twice. Once to expand the play controls, and again to actually play it. Thats a real pain when you’re trying to find the best track of may. Then again, you can combine multiple takes in the same recording, so that mitigates this somewhat.

You can’t bulk export — you have to do it one clip at a time, and while you can hook up an external mic, I haven’t been able to make Voice Memos recognize a USB audio interface. Also, there’s no iPad version available.

Ferrite is a very full-featured app that is designed for recording multiple clips, and editing them together. It’s meant for putting together podcasts, but it servers very well as a musical sketchpad and idea recorder.

It launches fast, to a screen with a big record button on it. Once recording, you can tap a button to add bookmarks, you can adjust the input gain (even on the iPhone’s built-in mic), and you can easily pick an input source if you’re using an external microphone.

Clips can be organized into projects. The idea is that you can then use the files in a project to edit a podcast, or an interview, but it works well to keep song ideas together too.

Export is easy, and you can export multiple clips together, to anywhere you like (iCloud Drive, for example). If you pay for the in-app upgrades, you can choose many export formats, but for basic music memos use the free version is fine.

Ferrite also lets you easily audition your clips. Each item in the list of clips has its own play button, and one tap plays it.

The only improvement might be syncing the clips libraries between iPhone and iPad using iCloud.

Apple’s own Music Memos app is a pretty good choice, but recently it has slowed down on my devices to the point that it’s unusable. The app takes an age to launch, and even when it’s up and running, often the record button doesn’t respond.

If you can make it work, though, the app has a lot going for it. It will detect the key, the chords, and the rhythm of your clips, and offer to accompany them with drums and bass. The results can be exported direct to GarageBand for further editing, and you can do a lot of tweaking of the drums and bass right there inside the Music Memos app itself. The app also syncs between iPhone ands iPad via iCloud Drive (so you clips are also accessible in a folder on your Mac).

It’s almost perfect, but it’s so unreliable I can’t use it any more. 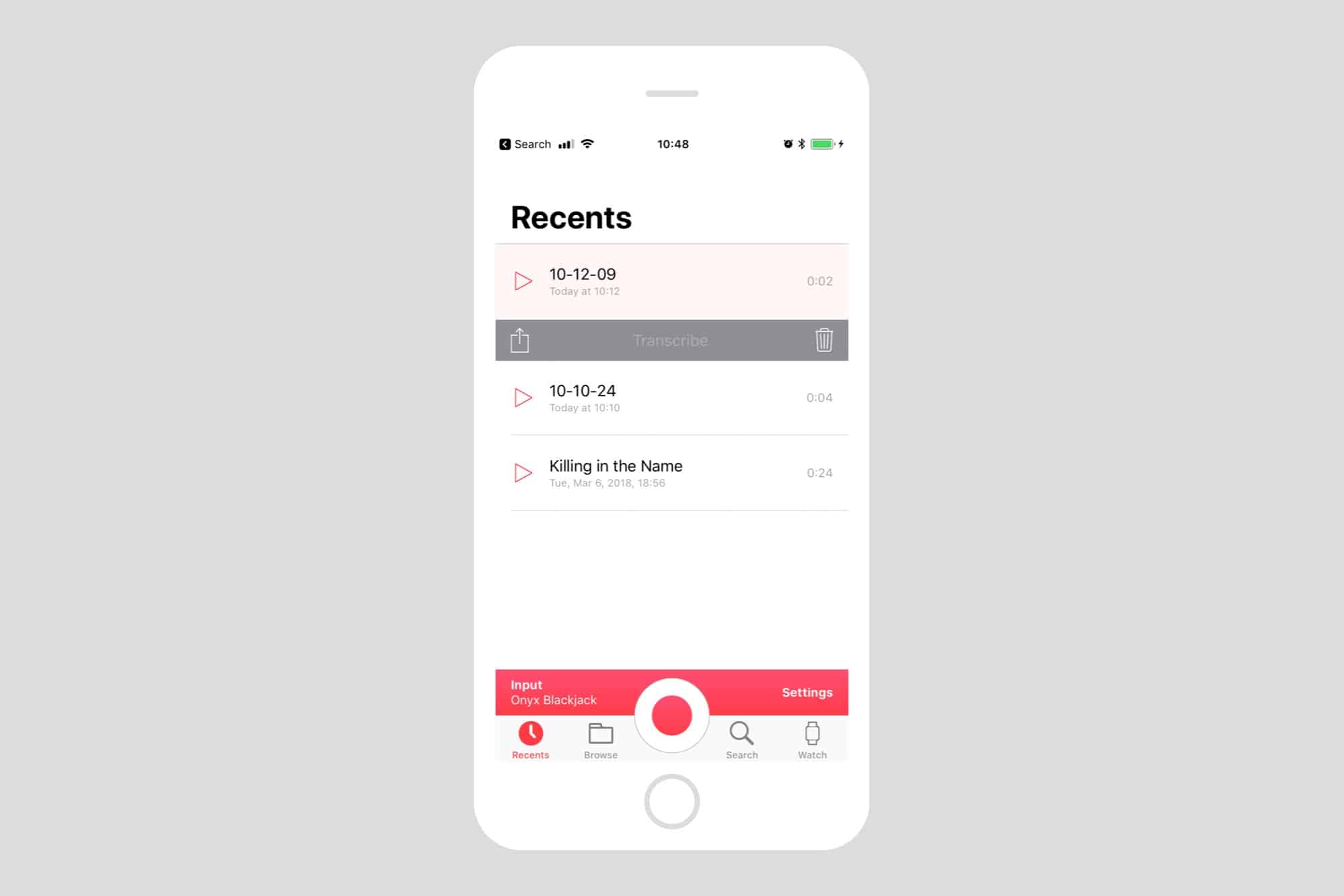 Just Press Record is the slickest and quickest of all these apps.

Just Press Record is the fastest-starting app in this list. You can use 3D Touch to launch start a recording session from the home screen, or a widget, before even launching the app. You can also set it to start recording on launch. Recordings can be paused and resumed, although with as many options as in the Voice Memos app.

It accepts inputs from any device, it’s easy to rename the clips, you can audition clips with their own play buttons, just like Music Memos and Ferrite, and it can save its recordings in an iCloud Drive folder. There’s even the option to have it automatically transcribe spoken audio, and an Apple Watch app, with a complication to instantly start recording, and a Mac version. 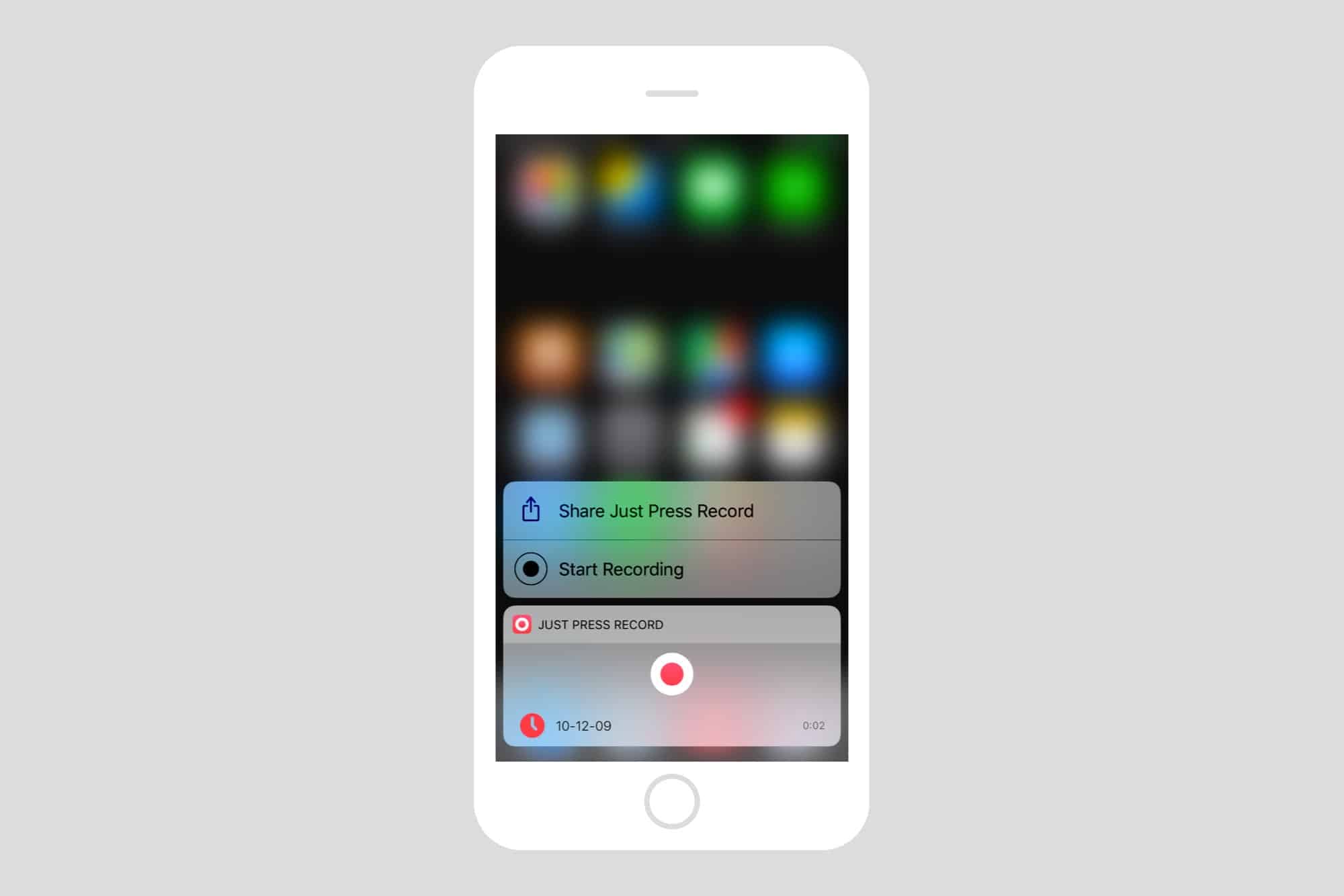 In short, Just Press Record is almost perfect. It even looks good. I like this one quite a lot, and it is the first app to make me think seriously about getting an Apple Watch. You can even — and this is a bit nuts — drag tracks from your Music Memos iCloud Folder into the Just Press Record iCloud folder, and it will import the files.

We’ve covered AudioShare before on Cult of Mac, because it is excellent. It’s an app for recording and organizing snippets of audio, and unsurprisingly it is also great for recording snippets. Starting a recording from a cold launch take two button taps — one to select recording mode, one to begin recording — but it is still very fast. Recordings are instantly available in the Library, and can be auditioned with their own play buttons.

And because this is AudioShare, you can use all the app’s other audio tools to process and edit your audio. AudioShare, then, meets all the requirements of my list at the begging of this post. But it also has one unique feature. It can record audio from other apps. This means that you can grab a snippet from a synthesizer app, or from your favorite guitar amplifier sim app. None of the other apps here can do this.

And the best alternative to Voice Memos is…

Part of my reason for writing this article was to figure out which app I’m going to use to replace Music Memos, which has turned into a drunken spouse. When it works, it’s fantastic, but you never know when it’s going to come home drunk and unresponsive, and then wake up in the night and pee on the TV set in the corner of the bedroom. I may have gotten lost in that metaphor.

But I really can’t decide. Voice Memos is good because it lets you do multiple takes in the same recording, and because it is built into the iPhone, it will be around forever. But organizing and exporting files is weak, and it’s iPhone-only. Just Press Record is almost perfect, and works on iPhone and iPad, but in-app trimming and editing isn’t available.

Which leaves AudioShare, which I love already, but lacks the simplicity of something dedicated to recording.

I’m going to give these three a real workout over the next week or so and see which one I prefer. If you have any suggestions, get in touch.