I do wonder who might need their Time Machine backups to run every single hour. With the versioning tools built into Dropbox, or into text editors like Ulysses, and the reliability of SSD drives, hourly backups may be overkill. Or they may just be annoying. Or, if you have an older Mac, they may slow things down while you’re trying to work. Whatever your reason for complaining about hourly Time Machine backups, then, TimeMachineEditor has you covered. It’s a free utility that takes control of Time Machine scheduling.

Time Machine is fantastic. Its mere existence means that zillions of people have backups, when they would otherwise be going without. By default, Time Machine creates the following backups:

When the backup disk fills up, the oldest backups are deleted to make space as needed. Other than switching Time Machine off, or manually skipping a backup every time one starts to run, the user has no way to change this schedule.

TimeMachineEditor allows a user to choose when backups occur. Its simple interface — a tiny window — gives a powerful set of options for scheduling your Time Machine backups. You can set the schedule by interval, or using a calendar, and you can even set it only to run backups when your Mac is idle. Perhaps you’ve gone off to make a coffee. Or maybe you’re one of those monsters who leaves their computer running 24/7 instead of letting it sleep, therefore promoting climate change and guaranteeing the end of the human race.

Schedules can be set in hours, days, or even weeks, and you can also set a time window where the backups never run. This is handy if you watch TV shows using your computer every evening, and don’t want to grind its hard drive, or if you regularly create or change a lot of data on your machine while working, which leads to Time Machine running almost constantly.

The interval option also allows you to toggle local snapshots on and off. These are new in macOS High Sierra, and take advantage of the new APFS file system to capture versions of your files as you change them. These snapshots are stored on the local drive, not the back, but they mean that you can easily revert to previous versions of your work without resorting to an actual separate backup. 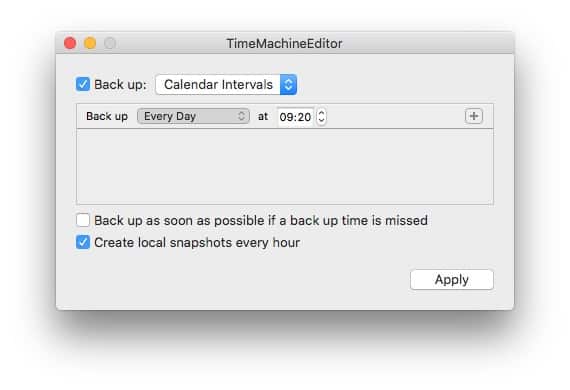 You can also set a schedule using a calendar. This lets you create a list of backup tasks, by weekday and time. You could have backups run every day at midnight, for example, or every weekday evening at 6PM after you’ve done working. Or you could run a single weekly backup.

If you really hate Time Machine backups running while you’re using your machine, then try the backup “when inactive” option, which does just that. It triggers a Time Machine backup whenever your Mac becomes idle. This is great if you use your machine for disk-heavy work, like maybe movie editing, and yet still want your backups as regular as possible. You can also set a time slot where no backups will run, even when you step away from your machine.

Time Machine is still in control

Some folks might be worried about installing an app from outside the App Store, especially one which uses an installer package like TimeMachineEditor, and therefore requires an administrator’s password. I can’t vouch for TimeMachineEditor, but beloved Apple journalist Jason Snell has been using it for some time, and recommends it, which is good enough for me.

If you still don’t feel happy about it, then there are options in the Mac App Store. I haven’t tried any, but something like Backup Scheduler:Time Editor looks like it does a similar task.