Apple’s iPhone 7 keynote only featured about eight minutes of stage time for women, but after being confronted about its lack of diversity, the company says its definition of the subject is a lot more flexible than normal apparently.

According to an Apple spokesman, both Canadians and British citizens should be counted as a sign of how diverse the iPhone maker is, even though most of the people of color and women that shared the stage don’t actually work for Apple.

“There was a lot of diversity on that stage that you don’t recognize,” an Apple PR rep told Mic in an email. “Unrecognized by you was the fact that we had a gay man, two African-Americans (Instagram and Nike), a Canadian and a British woman, Hannah Catmur.”

Like many Silicon Valley companies, Apple has pledged to be more open about its hiring practices and workplace diversity. While the company’s latest diversity report shows Cupertino is making progress, Apple’s U.S. workforce remains mostly white and male.

That can be especially obvious during high-profile events like last Wednesday’s iPhone 7 unveiling in San Francisco, which activists and journalists alike might view with a stopwatch in hand.

In a story headlined “Apple is committed to diversity, but it fails on the biggest stage in tech,” Mic reported that “men spoke for over 99 minutes” at the event, while women spoke for eight.

That report prompted the email from Apple. In it, the PR guy (whose name was not printed by Mic) also claims Apple has made more progress than any other tech company in its hiring of African-Americans and Latinos over the last three years. They just don’t get stage time because the company’s leadership is dominated by old white dudes.

Apple tried to keep the email private by writing “off the record” at the top without reaching an agreement with the journalist beforehand.

You can read the entire email below: 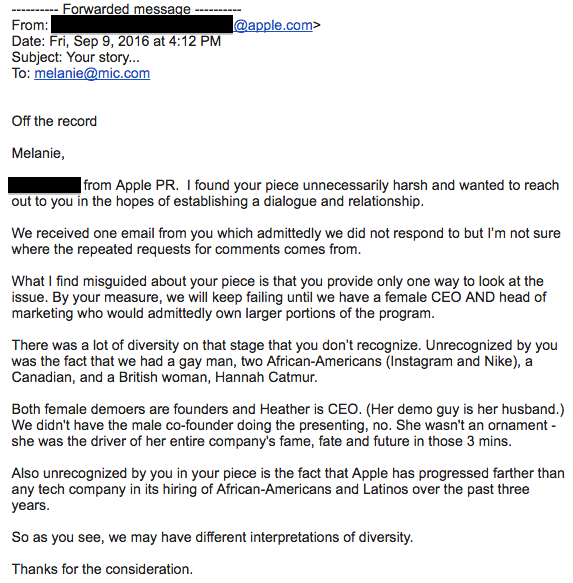