The upcoming iPad Air 3 might look a lot like the new iPad Pro, only a bit smaller, according to a purported new leak.

The update to the Air line could be coming down the pipeline as soon as March, and it appears that the refreshed tablet could come with four-speaker audio.

Based on a supposedly leaked design schematic of the iPad Air 3 obtained by Nowwherelse.fr, Apple plans to add the iPad Pro’s four-speaker audio to the new tablet, with two speaker openings on the top and two on the bottom. Apple declined to update the iPad Air in 2015 in favor of promoting the bigger iPad Pro and iPad mini 4. 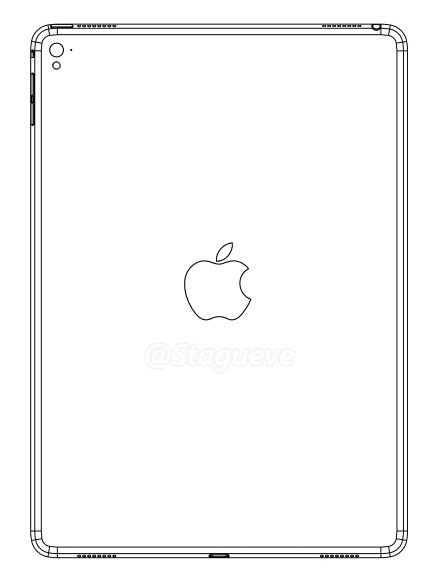 The schematic also reveals that the iPad Air 3 could gain a rear flash. That may seem like a trivial addition, seeing as how the iPad isn’t really considered a great camera replacement, but with an improved rear camera, the flash would make for better low-light photography, as well as allowing the iPad to double as a gigantic flashlight.

It appears that Apple won’t be killing the headphone jack quite yet on the iPad Air 3, if the the drawing is accurate. NowhereElse.fr cautions that the source who leaked the sketches was reliable on two occasions, but their last tip was woefully wrong.

The iPad Air 3 could be unveiled this spring alongside a 4-inch iPhone 5se. It’s unclear what other new features the updated tablet will get, though it’s unlikely to add 3D Touch and/or Apple Pencil support. Other additions will likely include an improved A9X processor (or an A10), as well as small improvements to the cameras, display, battery and other internals.